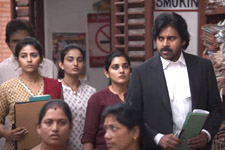 Anil Bandhakavi / fullhyd.com
EDITOR RATING
5.5
Performances
Script
Music/Soundtrack
Visuals
6.0
5.0
5.0
6.0
Suggestions
Can watch again
No
Good for kids
No
Good for dates
No
Wait to rent it
Yes
Vakeel Saab is a pertinent film for the times. One of the perplexing ironies of our culture is that we uplift, and even fear, the matriarch as a figure of immense strength while simultaneously applying the most stringent standards of character judgment on her younger self.

A worthy attempt is made by Venu Sriram in Vakeel Saab, a remake of the Bachchan-starrer Pink, to shed some light on these social patterns prevalent in our society - though he too stays conservative by glorifying a hero figure in Pawan Kalyan, reflecting the reality of the box office and, indeed, our society.

Pallavi (Nivetha Thomas), Zarina (Anjali) and Divya (Ananya Nagalla) are implicated for extortion and attempted murder after a night of partying with Vamsi (Vamsi Krishna) and his friends. The girls escape and Vamsi is rushed to the hospital after sustaining a head injury caused by the impact of a glass bottle which he claims is the result of Pallavi's assault. Pallavi's version is that she attacked Vamsi in a state of powerlessness after he forced himself onto her.

The girls hope to put the incident behind and apologise to Vamsi, but the boys are too hard-headed to let a blow like this go so easily and start threatening Pallavi. The police get pulled into the scuffle by both parties, and the young women, who come from humble backgrounds, fare poorly in comparison to Vamsi who's the son of an influential MP. The girls are painted out to be escorts who are taking advantage of four rich and innocent boys.

Satyadev (Pawan Kalyan) makes his entry as a superhero-turned-alcoholic, employing the typical trope of the virtuous man who's given up on the world. In his backstory, he takes up studies to be a lawyer to fight for the underprivileged and the disadvantaged who refer to him as "Vakeel saab". However, his happy marriage ends tragically with the death of his pregnant wife.

The girls, who are turned down by lawyers unwilling to go against an MP's son, are inevitably led to Satyadev for whom it is time once again to don the white shirt and black coat and fight for truth and justice.

Vakeel Saab's poignant message and Pawan Kalyan's heroics run like two parallel tracks throughout the film. It's as though one cannot succeed without the other. You wonder whether there is no place for a crucial message if it's not played out behind the veil of a superman who's also a martial arts expert when required - the superman being the medium over which we consume the message. We must ponder whether a superwoman still has no place in the fight for the dignity of her gender.

The movie does a good job of portraying the very middle-class and powerless nature of the girls. They really carry the appearance of three young women who work in the IT sector and are ill-equipped to endure the possibility of a regular night of partying gone astray.

Satyadev's arguments in court address the essence of a woman's experience through the obsolete and harsh standards applied to girls around the topics of drinking, dressing and premarital sex. However, his fantastic stature and ability to also jump in as an ad hoc bodyguard for the girls remind you that the film is not making an effort to explore any realistic solutions, but just addressing our notions and perceptions around these matters. This is where the movie finds its weakness as it gets stuck in a slightly dull zone between reality and fantasy.

Pawan Kalyan occasionally looks like a middle-aged man who's beginning to experience the lethargy of old age. In the flashback scenes from his college years, his appearance can go for a family man pursuing a delayed education. His ability to mimic the energy of his younger years might be running thin, but he still seems capable of garnering some whistles, so why not squeeze the juice down to the rind? Of course, on a performance level, he's a man who's been in the business long enough to not fail at grabbing the spotlight while playing his character. Admittedly, he invokes the necessary emotions at some critical junctures.

As Satyadev's clients, Nivetha Thomas, Anjali and Ananya Nagalla are strong in keeping their positions. Prakash Raj is bright in his role as Satyadev's adversary in court, but also has no superhero requirements to fulfil.

The cinematography and editing yield no disturbing hiccups, but the background score is quite clichéd in its inspirational escalations of your mood.

Vakeel Saab manages to wrench your heart a little bit around the unjust double standards faced by women in our society through undeniable reminders of our collective behaviour. But just as Satyadev criticises society for forgetting about a heinous crime against a woman after a week of marches and vigils, this film might inspire you a little over its duration, but it's hardly likely that you will contemplate its tone after your post-film exit. It's just another attempt at driving a very necessary message forward.
Share. Save. Connect.
Tweet
VAKEEL SAAB SNAPSHOT 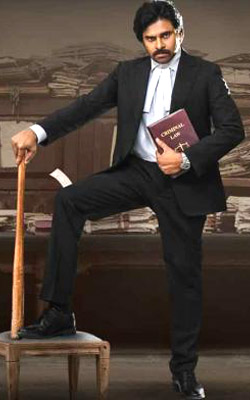 ADVERTISEMENT
This page was tagged for
Vakeel Saab telugu movie
Vakeel Saab reviews
release date
Pawan Kalyan, Nivetha Thomas
theatres list
Follow @fullhyderabad
Follow fullhyd.com on
About Hyderabad
The Hyderabad Community
Improve fullhyd.com
More
Our Other Local Guides
Our other sites
© Copyright 1999-2009 LRR Technologies (Hyderabad), Pvt Ltd. All rights reserved. fullhyd, fullhyderabad, Welcome To The Neighbourhood are trademarks of LRR Technologies (Hyderabad) Pvt Ltd. The textual, graphic, audio and audiovisual material in this site is protected by copyright law. You may not copy, distribute, or use this material except as necessary for your personal, non-commercial use. Any trademarks are the properties of their respective owners. More on Hyderabad, India. Jobs in Hyderabad.