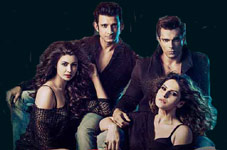 Zehra Abbas / fullhyd.com
EDITOR RATING
3.0
Performances
Script
Music/Soundtrack
Visuals
4.0
3.0
5.0
6.0
Suggestions
Can watch again
No
Good for kids
No
Good for dates
No
Wait to rent it
No
Don't let that big, bold "A" rating on the posters of Hate Story 3 fool you; this is decidedly juvenile fare.

Aditya Diwan (Sharman Joshi) is enjoying the luxe life as one of Mumbai's leading industrialists till he meets Saurav Singhania (Karan Singh Grover), a mysterious newcomer in the business world. Saurav gifts Aditya an Audi, and makes a business proposition - he would put his considerable financial clout behind Aditya in return for one night with his wife, Siya (Zarine Khan).

Aditya refuses, and both men swear to destroy each other. They use Siya and Kaya (Daisy Shah) in their game of cat and mouse, and what follows is a story of vengeance and plotting of Shakespearean proportions - that is, if a bunch of hormonal teenagers decided to adapt the Bard's work for a high school play that only Mumma and Pappa would willingly attend.

We all know the distinction between flat and round characters, and in Hate Story 3, the unidimensional characters are flatter than a steamrolled piece of plastic. The time that could have been spent developing characters is dedicated to titillation, so rather than showcase dramatic nuances, the characters do dirty dances. Additionally, they talk and act like the cliché-ridden fantasies of someone in solitary confinement.

Simply put, they just aren't realistic. Sample this - Saurav tells Kaya that his vengeance is fuelled by someone's suicide, and boom, the next thing you know, she's in bed with him. Credit to the makers for educating the general public about the aphrodisiacal properties of death.

On top of that, the dialogue writing is maddeningly trite. Our Cliché Nazi caught these gems and then retreated to its corner to sob:

If the dialogues aren't cliché-ridden, then they are painfully obvious. Characters take ten minutes to verbally articulate thoughts that take ten seconds in our brains. Your reviewer took a power nap during one such moment. Midway, the writer, Vikram Bhatt seems to have discovered the F-word, and it must have been a life-altering experience because the rest of the film uses the four-letter word repeatedly in an attempt to create edginess. Yet, the film flounders and fails to fascinate (the F-alliteration is dedicated to Bhatt).

If the F-word adds that contemporary touch, there's also an old favourite for the more traditional viewers. Saurav is called a rascal, a cheap rascal and a bloody rascal thus decimating whatever little menace poor Karan Singh Grover had managed to create. For this one, though, CBFC needs to take a bow.

As for the performances, it's apparent that director Vishal Pandya instructed the cast to save their energy for the "bold" scenes, and found clever substitutes for actual acting. So, yelling passes for anger, smirks for evil and glycerine tears for sorrow. All that unbuttoning, bosom-heaving, hip-swivelling and heavy breathing can be so exhausting, after all. Joshi and Grover still manage to give the impression that better writing and direction would do justice to their abilities, but the same can't be said for the ladies. Zarine Khan is like that gulmohar tree outside your window - pretty but wooden - whereas Daisy Shah's few scenes are a master class in How Not To Act.

The "thrilling" twists and turns in the plot can be seen a mile off, like a kiddie racing track, and it becomes tedious after a point. Also, every teensy plot turn, or step forward for that matter, is accompanied by hyperbolic guitar riffs and percussion. The background score becomes exhausting 10 minutes into the movie, and that's bad news when the duration is 2 hours 12 minutes. The incongruity between the makers' obvious lack of cinematic ambition and the ambitious length of the film is truly perplexing. Except for "Tujhe Apna Banane Ka", none of the songs stays with you, and you'll be irritated by their intrusive arrangement in a plot that is weak to begin with anyway.

Watch Hate Story 3 only if you are willing to accept copious amounts of skin show as compensation for this train-wreck. 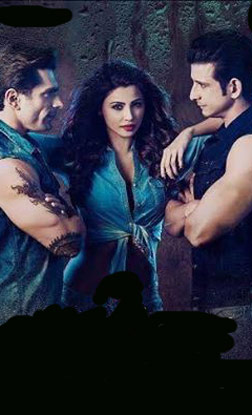 ADVERTISEMENT
This page was tagged for
Hate Story 3 hindi movie
Hate Story 3 reviews
release date
Sharman Joshi, Karan Singh Grover
theatres list
Follow @fullhyderabad
Follow fullhyd.com on
About Hyderabad
The Hyderabad Community
Improve fullhyd.com
More
Our Other Local Guides
Our other sites
© Copyright 1999-2009 LRR Technologies (Hyderabad), Pvt Ltd. All rights reserved. fullhyd, fullhyderabad, Welcome To The Neighbourhood are trademarks of LRR Technologies (Hyderabad) Pvt Ltd. The textual, graphic, audio and audiovisual material in this site is protected by copyright law. You may not copy, distribute, or use this material except as necessary for your personal, non-commercial use. Any trademarks are the properties of their respective owners. More on Hyderabad, India. Jobs in Hyderabad.