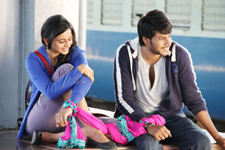 Kritika Deval / fullhyd.com
EDITOR RATING
7.5
Performances
Script
Music/Soundtrack
Visuals
7.0
5.5
7.5
7.0
Suggestions
Can watch again
Yes
Good for kids
Yes
Good for dates
Yes
Wait to rent it
No
When you go to a coffee shop expecting a plain coffee and get one with a smiley in it, it is always a pleasant surprise. That's exactly what Venkatadri Express is like - it is a pleasant surprise, sure to leave you with a smile.

Its story goes like this. Sundeep (Sundeep Kishan) is the proverbial black sheep, whose count of "thappulu" is now 99. He makes one more, and he's out of the house. This, readers, is the simple premise of a comedy of errors that'll keep you laughing till the last stop.

It all begins with Sundeep's brother's impending wedding in Tirupati. The whole family is set for their journey on Venkatadri Express. Sundeep, however, misses the train, which is a double oops because he also happens to have his brother's mangalsutra.

The rest of the film follows Sundeep as he scrambles to get to Tirupati before his family gets there; picking up a drunkard, fights, a police car, and, of course a dame (Rakul Preet Singh), en route.

Clever as the dialogue is, the screenplay is what makes the film the delight that it is. The film is tightly paced almost throughout, flagging a bit to the latter part of the second half, only to pick up pace just in time for the ending.

There is, thankfully, only a hint of romance, with the chemistry between Rakul and Sundeep handled fantastically, the makers having made it a point to stay away from anything predictable, other than the happily ever after. There's a bit involving the hero's mother towards the end, which could probably have been avoided, but the film manages to get right back on track.

Sundeep Kishan is a fine actor with comic timing to match that of the comedic masters (Tagubothu Ramesh, M S Narayana, Jayaprakash Reddy et al) who share space with him. Rakul Preet Singh is a delight to behold, with body language and expressions very reminiscent of Tamanna in Happy Days.

However, the highlight of the film would have to be Thagubothu Ramesh, who plays a big and surprisingly nuanced, albeit drunken, role in the film.

The cinematography and background track are as inventive and delightful as everything else about the film, and Ramana Gogula churns up a snappy soundtrack that is as hummable as it is short.

We could wax eloquently about this film's departure from the run-of-the-mill. We could talk about how this might mean a change in the industry and so on and so forth. The sad fact is, though, that there will always be more formula money makers than films made for the sake of making films.

Do your bit. Gather up your family and go watch it. Then, go with your friends. Then, maybe alone. You will not be bored.
Share. Save. Connect.
Tweet
VENKATADRI EXPRESS SNAPSHOT 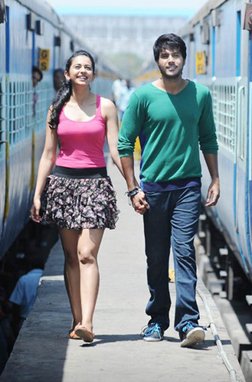 See Venkatadri Express full details
VENKATADRI EXPRESS USER REVIEWS
1 - 1 OF 1 COMMENTS
POSITIVE  |  NEGATIVE |  NEWEST  |  OLDEST  |  MOST HELPFUL  |  LEAST HELPFUL
Ramanamurthy Kolli on 4th Dec 2013, 2:17pm | Permalink
Fullhyderabad seems to have come to its originality. It is fully reflected in this review. Their recent reviews, screaming and aiding to create hype for some undeserving movies, can be forgiven once this type of impartial reviews are generated.

ADVERTISEMENT
This page was tagged for
venkatadri express telugu full movie
Venkatadri Express Telugu Movie Review
Venkatadri Express telugu movie
Venkatadri Express reviews
release date
Follow @fullhyderabad
Follow fullhyd.com on
About Hyderabad
The Hyderabad Community
Improve fullhyd.com
More
Our Other Local Guides
Our other sites
© Copyright 1999-2009 LRR Technologies (Hyderabad), Pvt Ltd. All rights reserved. fullhyd, fullhyderabad, Welcome To The Neighbourhood are trademarks of LRR Technologies (Hyderabad) Pvt Ltd. The textual, graphic, audio and audiovisual material in this site is protected by copyright law. You may not copy, distribute, or use this material except as necessary for your personal, non-commercial use. Any trademarks are the properties of their respective owners. More on Hyderabad, India. Jobs in Hyderabad.