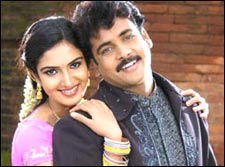 EDITOR RATING
3.0
Performances
Script
Music/Soundtrack
Visuals
6.0
3.0
4.0
4.0
Suggestions
Can watch again
No
Good for kids
Yes
Good for dates
No
Wait to rent it
Yes
Normally the only thing you'll get if you have a family of 100 by the time you're 100, is a lifetime achievement award. Rajayya (K B Tilak) is luckier - his several sons and grandsons and the extended family all stay with him because they love him. Now in reality the only way of being happy in a joint family of 100 members is having lived in a joint family of 200 before that. But since this is a movie, they all party on weekends, hug each others' children, joke around a lot, and many times even remember each others' names.

Rajayya however has one unsatisfied wish - his granddaughter Sarada has eloped 30 years back, and he wants to see her again. 30 years is a long time - even an ICICI Prudential telecaller stops calling you by then - but Sarada is fortunately still alive, and Rajayya's great-grandson Raja (Sivaji) promises him he'll bring her and her family for his 100th birthday in a few days.

Raja however is thrown out by Sarada's irate husband Sai (Raghu), who is still smarting at the insults heaped on him by Sarada's family 30 years back, making him only the second person in the world that we at fullhyd.com know to remember an insult that happened 30 years back (the first being our landlord). Sarada however persuades her husband, and they come to her ancestral home with their daughter Nidhi (Honey Rose), who is an anchor for a TV channel with about as much IQ as its TRPs, but who still manages to get Raja to flip for her, showing how women and TV channels are similar - men care two hoots for the TRPs of either if they show enough interesting stuff.

Rajayya is of course thrilled, as is the entire family - how many families can proudly boast of an eloped daughter returning home? However, the problem is Sai, who simply cannot bring himself to forgive the lot, and starts trying to sow the seeds of discord. To help seeds sprout really fast, you need a lot of manure, and the movie fortunately has a good deal of that.

Alayam is more like a TV serial than a movie, and wastes a robust support cast that includes almost the entire bunch of character artistes in Tollywood - which is probably the reason that they're all wasted. You'd expect plenty of comedy with a cast like that, but if for every time you laughed out loud in this movie you had a rupee, well, you'd be getting majorly underpaid.

Sivaji has little to do, and can do little about it. Honey Rose's debut could well be her swansong â€" she's not heroine material, and this movie doesn't have a heroine anyway. All performances are average, except that of K B Tilak, which keeps that average pretty low. And if you want to discuss the music of this one, you'll have to call yourself, and hope you won't disconnect the call when you discover the subject of the conversation.

Alayam is worth a watch if there is a DVD release and if you know a store that stocks everything. Until then, stick to ETV or Gemini.
Share. Save. Connect.
Tweet
ALAYAM SNAPSHOT

ADVERTISEMENT
This page was tagged for
alayam latest telugu movie
layam movie
Alayam telugu movie
Alayam reviews
release date
Follow @fullhyderabad
Follow fullhyd.com on
About Hyderabad
The Hyderabad Community
Improve fullhyd.com
More
Our Other Local Guides
Our other sites
© Copyright 1999-2009 LRR Technologies (Hyderabad), Pvt Ltd. All rights reserved. fullhyd, fullhyderabad, Welcome To The Neighbourhood are trademarks of LRR Technologies (Hyderabad) Pvt Ltd. The textual, graphic, audio and audiovisual material in this site is protected by copyright law. You may not copy, distribute, or use this material except as necessary for your personal, non-commercial use. Any trademarks are the properties of their respective owners. More on Hyderabad, India. Jobs in Hyderabad.