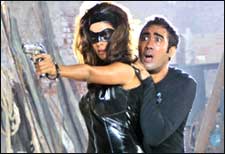 Samrat Sharma / fullhyd.com
EDITOR RATING
5.0
Performances
Script
Music/Soundtrack
Visuals
8.5
7.5
3.0
5.0
Suggestions
Can watch again
No
Good for kids
No
Good for dates
Yes
Wait to rent it
Yes
Ugly Aur Pagli has such great promise, and it wastes so much of the goodwill it has going for it, that I'm almost tempted to call it a terrible film. Which would do the considerable efforts of the lead pair a great disservice; because it's not a bad film - it's just confused. Based on the Korean runaway hit 'My Sassy Girl', Ugly Aur Pagli has a great film hidden in there somewhere. Problem is it's hard to see it even when you are lookin'.

My Sassy Girl is getting a lot of mileage by the way - it's already a huge hit all over Asia, and there's a Hollywood adaptation in the offing as well. It all stemmed from a blog written that got adapted into a book, and things got all wild for that story from there. My point of bringing that up is that the source material is a bittersweet, slice of life story of a boy who thinks he's a loser and meets a woman who's headstrong, and as often as it happens in life they fall in love over the course of events.

There's nothing about life that can make for a great story film-wise, but Kwak Jae-young's film takes the events around the unlikely couple and turns it into a romance that is funny only in ways that life is can be, and tragic in ways life usually is. Sachin Khot's version, though, can't make up its mind about what it wants to be. Every bit as quaint and easy-going as the source, it keeps trying to throw in the funny kooky comedy routine, every bit from its Bollywood roots, and that is its ultimate downfall.

The film is ostensibly as much about love and the joy of being together as it is about hurt and emotional damage that we have to live with, with huge dollops of Bollywood style comedy thrown in. This is a combination that Sachin Khot can't make to work, and the film being watched keeps on being a bottleneck in the way of the story being told.

Where Khot fails at steering the film, the talented leads lift the moments up considerably. The story is about an engineering student still in school after 5 years, Kabir (Ranvir Shorey), and a headstrong and slightly off-kilter Kuhu (Mallika Sherawat), who walks into Kabir's life and creates pandemonium. Kuhu is a scriptwriter with bizarre ideas and a fantasy where she's always in control.

Here, though, both the actors are in complete control. No one else could have pulled off Kabir - the completely vulnerable idiosyncrasies and the gleeful abandon of being the one not wearing the pants in the relationship are translated beautifully by Shorey. He creates a character that we feel sorry for at every turn in the film, and that is hard to do.

Sherawat on the other hand is all bluster and pomp in her turn, perfectly marking her territory and excelling as the crazy but enigmatic girl. It's a great responsibility playing a female lead in a romantic film; you have to make the audience fall in love with you. Sherawat's character has the added responsibility of being completely shrill and flaky. She still manages to put in a great effort and create a character that is required. She falters and excels intermittently in the heavy drama, but is great when the character is in her own element.

Really, this is not so much a bad film as it is confused about what it wants to be. The film wants to be very faithful to the tragicomic source material, but on the other hand also wants some of that Pyaar Ke Side Effects magic to work on it. This makes for a badly directed, but excellently acted in film. Change your expectations of the movie, and you might have a good time.
Share. Save. Connect.
Tweet
UGLY AUR PAGLI SNAPSHOT


Pros: A weird yet strangely credible plot
Cons: A desire to make it (and package it as being) funny

ADVERTISEMENT
This page was tagged for
Ugly Aur Pagli hindi movie
Ugly Aur Pagli reviews
release date
Mallika Sherawat, Ranvir Shorey
theatres list
Follow @fullhyderabad
Follow fullhyd.com on
About Hyderabad
The Hyderabad Community
Improve fullhyd.com
More
Our Other Local Guides
Our other sites
© Copyright 1999-2009 LRR Technologies (Hyderabad), Pvt Ltd. All rights reserved. fullhyd, fullhyderabad, Welcome To The Neighbourhood are trademarks of LRR Technologies (Hyderabad) Pvt Ltd. The textual, graphic, audio and audiovisual material in this site is protected by copyright law. You may not copy, distribute, or use this material except as necessary for your personal, non-commercial use. Any trademarks are the properties of their respective owners. More on Hyderabad, India. Jobs in Hyderabad.