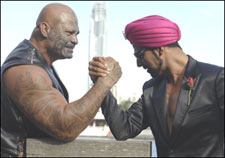 Samrat Sharma / fullhyd.com
EDITOR RATING
7.0
Performances
Script
Music/Soundtrack
Visuals
8.5
5.5
7.0
8.0
Suggestions
Can watch again
Yes
Good for kids
No
Good for dates
No
Wait to rent it
No
Akshay Kumar has arrived. Not that it is necessarily with this film; the unprecedented success he has enjoyed the past few years with his comedies has already made him the heir apparent to the superstar mantle. Singh Is Kinng positively heralds his coming of age as that icon, and celebrates the Akshay-ness of all things in this year's biggest comedy spectacle yet.

Not that the film is any good, mind. This is the usual mishmash of jokes, off-kilter characters and ludicrous situations that Bazmee excels at, and it isn't even that funny, really. That's the reason it needs Akshay. He is in complete control here - alternating between bumpkin and king (kinng?) of cool - and holds forth with an electrifying presence and an affable charm that has made him the darling of the masses.

Indeed, remove the dude, and you're left with a plot-hole-ridden screenplay supported with a gaggle of characters. In all fairness, the production values of Singh are much better than those of Bazmee's last outing (Welcome), thanks perhaps to Vipul Amrutlal Shah's hand at the production helm. Even so, Bazmee still can't decide between the Apatow-like improv angles he employs and the epic scale he hopes to mount.

In something of an homage to the '70s Manmohan Desai / Prakash Mehra 'entertainers', Bazmee decides to make an all-out cult of personality entertainer, with a healthy dose of comedy, action, romance and drama. He succeeds in most parts, and thus you may complain about a thousand gaffes when the show's over, but until the screen flickers, you are compelled to watch.

The biggest catalyst to make this work is, of course, the personality itself. Perhaps that is why the film is so aptly created around the star, because the film ishim. Nicely complementing the movie's roots, Akshay dons the mantle of an allround entertainer and star, the likes of whom we haven't seen in his generation. Pooh-pooh all you will the lackluster moments of the film - Akshay makes his presence felt in every scene he cohabits.

The plot as mentioned is terrible: Lucky Singh (Sood) is an underworld gangster in Australia, and hails from a village in Punjab which is shaped by what he becomes. Happy Singh (Kumar) is the village idiot, well meaning but a walking disaster. When they can't stand him anymore, the villagers strap him off with a friend (Puri) and ship him off to bring Lucky back.

To add to the confusion, the impossible mission starts off with them getting waylaid in Egypt, where he meets Sonia (Kaif) and falls heads over heels. After finally getting back to where he was meant to be, Happy realizes the neighbor shuns him and the ladylove has a fiance. A healthy smattering of predictable plot twists later, you walk out of the theatre grinning.

In some sense, this is the perfect plot for such a film. This is a cult-of-personality movie, and such a story gives ample room for him to show his stuff off. For his part, Akshay is having fun. He diligently puts on a believable accent and then takes the rest out of the ballpark. Immense screen presence and a great supporting cast all root for him.

Puri has never been an actor that distinguishes between his pay-cheque roles and his 'proper' roles, and he gives this one what it requires. Surprisingly, Yashpal Sharma, the oft dependable character actor, completely nails the tone of the film, where Shorey and Jaffrey struggle to find their funny bone. The real revelation here though, is Kaif.

She still has that after-taste of a firang accent, but has gotten better at what she does tremendously. She exudes warmth and sexiness in the same frame, and is the complete incarnation of a '70s siren - completely in tone with the film.

Don't let that fool you though - this is no immortal movie. This very possibly is not a film that would go on to become a comedy classic or even remembered much beyond its inevitable DVD release. For as long as it lasts, though, this is a fun ride, and you are bound to have a good time. The litmus test for you to go watch this would be this question: Do you like Akshay Kumar? Because if you don't, there's nothing in this flick that will entice you.

Singh Is Kinng is not a must watch, but a masala film done well. In a time when all Hindi movies in recent memory have been terrible, this one might offer some salve to you, but if you do decide to give this bhangra-riffic movie a miss, do at least revisit a good '70s entertainer. This one's not the real deal, but it comes close.
Share. Save. Connect.
Tweet
SINGH IS KINNG SNAPSHOT

RATING
5
Maverick on 9th Aug 2008, 12:17pm | Permalink
Absolutely awful Script. Found it very hard to sit through the length of the movie. Akshay is the saving grace. All but the Akshay enthusiasts, strictly keep away!


Pros: Akshay
Cons: Everything else

ADVERTISEMENT
This page was tagged for
Singh Is Kinng hindi movie
Singh Is Kinng reviews
release date
Akshay Kumar, Katrina Kaif
theatres list
Follow @fullhyderabad
Follow fullhyd.com on
About Hyderabad
The Hyderabad Community
Improve fullhyd.com
More
Our Other Local Guides
Our other sites
© Copyright 1999-2009 LRR Technologies (Hyderabad), Pvt Ltd. All rights reserved. fullhyd, fullhyderabad, Welcome To The Neighbourhood are trademarks of LRR Technologies (Hyderabad) Pvt Ltd. The textual, graphic, audio and audiovisual material in this site is protected by copyright law. You may not copy, distribute, or use this material except as necessary for your personal, non-commercial use. Any trademarks are the properties of their respective owners. More on Hyderabad, India. Jobs in Hyderabad.