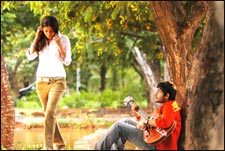 EDITOR RATING
7.0
Performances
Script
Music/Soundtrack
Visuals
5.0
8.5
7.0
8.0
Suggestions
Can watch again
Yes
Good for kids
Yes
Good for dates
Yes
Wait to rent it
No
Just when you thought there was no one who could make Sneha Ullal look like a good actor, comes the proof that God creates someone for everything. And so, ladies and gentlemen, we have Yasho Sagar.

One of the unexpectedly good films in Telugu in recent times, Ullasanga Utsahanga is a paradox - it has the worst performances by a lead pair in a really long time. As it is, Sneha Ullal shows so little energy, you're surprised where she gets even that from. And Yasho Sagar actually makes her look like a contendor for the National Award, in multiple categories - so unbelievably terrible is his, um, acting. We are sure he is some big guy's son - please Google and find out (we could do it ourselves, but Google doesn't open in our office when we want to find out who someone's father is).

Ullasanga Utsahanga is the story of Arvind (Yasho Sagar), a youngster who is fun-loving and happy-go-lucky (we found that out by reading other reviews, since it's hard to make anything out from his acting). One day he is trying to walk on water when he discovers something incredible - no, not that some things are impossible even if your father is a big guy, but Dhanalakshmi (Sneha Ullal) trying the same in her sleep. He soon realizes that Dhanalakshmi always looks like she's asleep, but still falls in love with her.

Dhanalakshmi however is not interested, and to avoid him, gives him the impression that she has the Ghajini condition - that she cannot remember what she did yesterday. We at fullhyd.com know several people giving the impression that they have that problem, but they are all good actors. Dhanalakshmi genuinely looks like she's forgotten what happened yesterday, and mostly since she slept through all of yesterday.

One day Dhanalakshmi, fed up by now, finally tells him that there's no problem with her, and that she was awake - er, that she remembers - every day. Arvind is understandably upset - what if he'd discovered this after marriage? He stops talking to her, but she apologizes and says she wants to be friends but not lovers, since she is already in love with a childhood sweetheart Balaji who she was forcibly separated from at the age of 9.

Well, the movie is more about some great screenplay and comedy rather than any romance, and you can safely watch it without being worried that it'll rake up any old wounds in your psyche. The jokes are good enough to withstand some horrible delivery by Yasho Sagar, and the supporting cast is totally competent to more than neutralize his presence.

Yasho Sagar is good news and bad news. The good news is that you'll see much more of him since this film is a hit. If that's the good news, imagine the bad news. So let's skip it. Sneha Ullal is so lifeless, her dubbing artist would need a dubbing artist to bring her dialogues to life. The songs are above average, and that means the movie's success will make them hits. The movie looks visually quite good, adding to the package.

Ullasanga Utsahanga is a rollicking movie outing. Take along your kids, your neighbours, your grandparents and anyone else who it is rumoured deserves a good time.
Share. Save. Connect.
Tweet
ULLASANGA UTSAHANGA SNAPSHOT

See Ullasanga Utsahanga full details
ULLASANGA UTSAHANGA USER REVIEWS
1 - 2 OF 2 COMMENTS
POSITIVE  |  NEGATIVE |  NEWEST  |  OLDEST  |  MOST HELPFUL  |  LEAST HELPFUL
USER RATING
8.0
1 USER
Performances
Script
Music/Soundtrack
Visuals
7.0
8.0
5.5
5.5
Can watch again - Unsure
Good for kids - Yes
Good for dates - Yes
Wait to rent it - No
its_vinay on 31st Jul 2008, 11:36pm | Permalink
Don't expect more about the movie and also dont compare with TOLIPREMA.If you entered theatre with less expectations then surely you will feel this as a good movie.
yasaswi55 on 26th Jul 2008, 1:36am | Permalink
siMPLY THE MOVIE IS SUPERB,BUT FEW EXCEPTIONS ARE THERE,THAT IS
1.)HERO(WE CANNOT ACCEPT HIM AS HERO UNTIL END OF THE FILM)
2.)SONGS,THE MUSIC COMPOSED BY G.V.PRKASH ARE NOT GOOD.

ADVERTISEMENT
This page was tagged for
Ullasanga Utsahanga telugu movie
Ullasanga Utsahanga reviews
release date
Yasho Sagar, Sneha Ullal
theatres list
Follow @fullhyderabad
Follow fullhyd.com on
About Hyderabad
The Hyderabad Community
Improve fullhyd.com
More
Our Other Local Guides
Our other sites
© Copyright 1999-2009 LRR Technologies (Hyderabad), Pvt Ltd. All rights reserved. fullhyd, fullhyderabad, Welcome To The Neighbourhood are trademarks of LRR Technologies (Hyderabad) Pvt Ltd. The textual, graphic, audio and audiovisual material in this site is protected by copyright law. You may not copy, distribute, or use this material except as necessary for your personal, non-commercial use. Any trademarks are the properties of their respective owners. More on Hyderabad, India. Jobs in Hyderabad.