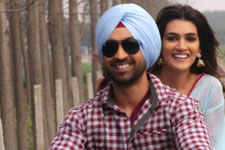 Neema Pramod / fullhyd.com
EDITOR RATING
6.5
Performances
Script
Music/Soundtrack
Visuals
6.5
5.5
5.5
6.5
Suggestions
Can watch again
Yes
Good for kids
Yes
Good for dates
No
Wait to rent it
No
We humans love to laugh. As they say, "Laughter is the best medicine", which is why we usually prefer comedies over tragedies. It is easy to forget our miseries while we laugh at the antics of others. But what if the joke is on us? Will we still be able to laugh at ourselves with the same abandon with which we laugh at others?

Your response to this question will determine your reaction to Arjun Patiala, which is an out-an-out spoof movie. From the first frame till the last, it pokes fun at almost every cinematic trope in your quintessential Bollywood action film, without taking itself seriously even for a millisecond.

The movie opens with an overenthusiastic writer-director (Abhishek Banerjee) narrating his script to a producer (Pankaj Tripathi) who has won the coveted Golden Kela Award more than once. The Hero of his film is Arjun Patiala (Diljit Dosanjh), your typical Punjabi munda who becomes a cop through the sports quota. He is posted in Ferozepur - a small town in Punjab - and is entrusted with the task of making it a "crime-free city". Our hero gamely rises to this challenge, partly to honour the wishes of his mentor - "Hero Ka Hero" DSP Gill (Ronit Roy) - and partly to impress his "Hero Ki Heartbeat" - crime journalist Ritu Randhawa (Kriti Sanon).

We are living in a time where people take offence at anything and everything, having lost the ability to laugh at themselves. This is exactly why the self-deprecatory humour in Arjun Patiala feels like a breath of fresh air. It has every element you expect from your average cop film - gravity-defying stunts, punch dialogues, slow-motion walks, an item song, romantic duets, family sentiment, hero's best friend-cum-punching-bag-cum-butt-of-jokes (Onida Singh, played by Varun Sharma) and the works. But this movie takes all these clichés, amps them up and throws them at you, making them seem even sillier and outdated than they already are. It makes you question everything that you have accepted as part of this genre, and asks, "Don't you see how ridiculous these are?"

However, that does not mean that Arjun Patiala makes the audience feel like fools for entertaining such stupidity for so long. On the contrary, it looks at these aforementioned clichés with a sense of fondness, as though meaning to say, "Yes, we know this is silly, but we love it nonetheless." This immediately makes the film endearing, rather than condescending.

This is not to say that this is a perfect, or even a very good, movie. Not all jokes land, and the film can get a little tiresome at times. It is quite easy to overdo it when it comes to comedy, especially spoof-comedy, and the movie crosses that stage in many instances. To add to that, there are too many songs which, though fun and peppy, slow the film down in the second half.

But even at its lowest point, the movie never becomes unwatchable, and that is because of the performances. Diljit Dosanjh is his usual charming self, and has good comic timing. Other actors like Varun Sharma, Kriti Sanon, Ronit Roy and Seema Pahwa lend him ample support. The ever-dependable Pankaj Tripathi deserves a special mention for his rib-tickling turn as a producer who has never read a script in his career. Mohammed Zeeshan Ayyub as Sakool - one of the four Villains - manages to impress.

Arjun Patiala is very much like that glass of lassi our eponymous hero enjoys on a warm day - simple, sweet and refreshing without trying to be more than what it is. If you are in the mood to just forget everything and laugh, and don't mind taking digs at yourself and your habits, then this might just be the movie for you.
Share. Save. Connect.
Tweet
ARJUN PATIALA SNAPSHOT 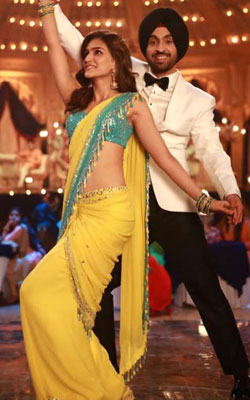 ADVERTISEMENT
This page was tagged for
arjun patiala full movie in hindi
arjun patiala FULL MOVIE 123 MOVIES
Arjun Patiala hindi movie
Arjun Patiala reviews
release date
Follow @fullhyderabad
Follow fullhyd.com on
About Hyderabad
The Hyderabad Community
Improve fullhyd.com
More
Our Other Local Guides
Our other sites
© Copyright 1999-2009 LRR Technologies (Hyderabad), Pvt Ltd. All rights reserved. fullhyd, fullhyderabad, Welcome To The Neighbourhood are trademarks of LRR Technologies (Hyderabad) Pvt Ltd. The textual, graphic, audio and audiovisual material in this site is protected by copyright law. You may not copy, distribute, or use this material except as necessary for your personal, non-commercial use. Any trademarks are the properties of their respective owners. More on Hyderabad, India. Jobs in Hyderabad.