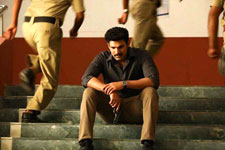 Neema Pramod / fullhyd.com
EDITOR RATING
7.0
Performances
Script
Music/Soundtrack
Visuals
6.5
7.0
8.0
7.0
Suggestions
Can watch again
Yes
Good for kids
No
Good for dates
No
Wait for OTT
No
When in doubt, go with a remake. This seems to be the philosophy of many actors now after they hit a rough patch in their career, examples being Ram Charan's Dhruva (a remake of the Tamil film Thani Oruvan) and Shahid Kapoor's Kabir Singh among many others. Bellamkonda Srinivas appears to have thought along the same lines when choosing to act in the Telugu remake of the Tamil hit Ratsasan, after a poor run at the box-office with his last few releases. And his derisking strategy may just have worked.

Arun (Bellamkonda Srinivas) is an aspiring filmmaker struggling to find takers for his script. His genre of interest is psychological crime-thriller, as is evident from his bedroom walls plastered with newspaper cuttings of crime stories about psychopaths. When nothing works in his favour, he decides to bow down to the wishes of his family and becomes a sub-inspector, with the help of his uncle (Rajeev Kanakala).

Around the same time, a teenage girl goes missing in the city, with no traces except for a gift package containing the head of a doll, with its eyes gouged out, hair ripped out and mouth damaged, that was delivered to her house. The girl's body is discovered two days later, mutilated and wrapped in a polythene bag, the damage done to her face resembling that done to the doll. At first the cops dismiss it as a one-off incident, but when another teenage girl goes missing under similar circumstances, Arun begins to suspect that the two incidents are connected.

Director Ramesh Varma had revealed that he had made no changes to the script of the Tamil original (even most of the cast members have been retained), and you can see why. For the most part, Rakshusudu is a taut, gripping thriller that will give you the chills. The original was lauded by many, and won critical acclaim as well as commercial success. Why fix something that ain't broken?

The first half of this movie is an example of fine screenwriting. Arun's filmmaking dreams and his vain attempts to achieve this dream form only the initial ten minutes of the film, yet his struggle gets conveyed effectively. You might wonder at first if all this detailing about Arun's background was necessary, but it is the research he had done for his script which ensures that he is always one step ahead of his superiors in decoding the case. Unlike other films where the hero knows everything because he is, well, The Hero, Rakshusudu gives a solid reason for it.

The film must also be appreciated for how it makes you feel the horror of the crime without actually showing the gore and gruesomeness of it. Ghubran's background score is terrific, making your stomach churn with unease. His BGM for the villain can well give you sleepless nights for a while.

The way in which Arun slowly uncovers the clues that lead him to the killer is also portrayed well. There are a couple of twists and turns in the narrative - one in particular made me gasp out loud in shock. It is also interesting to see the film try to do something different with the identity and motives of the serial killer (the story is inspired from a true case), and while the reveal isn't all that satisfying as compared to the build-up to it, it deserves an A for the effort.

Unfortunately, the remake retains the flaws of the original as well. The character of the heroine (Anupama Parameswaran) is just as underwritten as in the Tamil version, with an underwhelming love track between the two thrown in just for the sake of it. She adds nothing to the plot, except for helping Arun find a clue to the killer's identity. Another prominent female character - Arun's superior Lakshmi (Suzzabe George) - is terribly one-note, coming across as an unreasonable woman who values her ego more than the safety of the people she is supposed to protect.

The movie also goes on for a bit too long, and can lose your attention in a couple of places in the second half. The sub-plot involving the Maths professor (Vinod Sagar) makes shivers run down your spine, but stretches on after a point. The pre-climax portions too are a bit of a drag. The lack of "heroic" moments might be a minus for many - there are few action sequences and no punch dialogues, and Arun doesn't always succeed in what he sets out to do, but that just makes him feel more like a human than a God incarnate.

Coming to the performances, most of them work. Though Bellamkonda Srinivas as Arun is passable at best and expressionless at worst, he is better than he was in his previous movies. Anupama Parameswaran doesn't leave much of an impact, while Suzzane George does her best with the grating character. Ammu Abhirami is good as Arun's niece, and Rajeev Kanakala is wonderful. The rest of the cast is competent, especially Vinod Sagar as the creepy professor.

Apart from Ghibran's music, the cinematography by Venkat C Dilip deserves a mention for successfully conjuring up an atmosphere of fear and dread. Ramesh Varma has also done a good job at replicating the Tamil original almost scene-by-scene.

It remains to be seen whether Rakshusudu will give Srinivas the hit he desperately needs, but this is easily the best film he has been a part of in his short career. An intriguing thriller with a mostly tight screenplay, Rakshudu is worth a watch.
Share. Save. Connect.
Tweet
RAKSHASUDU (2019) SNAPSHOT 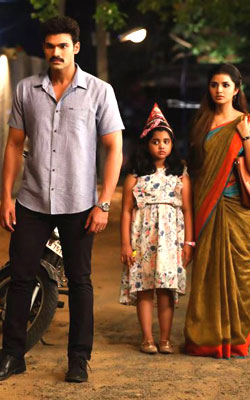 ADVERTISEMENT
This page was tagged for
rakshasudu moviec 2019 sowfya story girl
rakshasudu movierulz
Rakshasudu in movierulz
Rakshasudu 2019
rakshasudu telugu full movie 2019
Follow @fullhyderabad
Follow fullhyd.com on
About Hyderabad
The Hyderabad Community
Improve fullhyd.com
More
Our Other Local Guides
Our other sites
© Copyright 1999-2009 LRR Technologies (Hyderabad), Pvt Ltd. All rights reserved. fullhyd, fullhyderabad, Welcome To The Neighbourhood are trademarks of LRR Technologies (Hyderabad) Pvt Ltd. The textual, graphic, audio and audiovisual material in this site is protected by copyright law. You may not copy, distribute, or use this material except as necessary for your personal, non-commercial use. Any trademarks are the properties of their respective owners. More on Hyderabad, India. Jobs in Hyderabad.