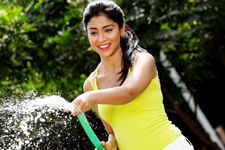 Kritika Deval / fullhyd.com
EDITOR RATING
4.0
Performances
Script
Music/Soundtrack
Visuals
5.0
4.0
4.0
4.0
Suggestions
Can watch again
No
Good for kids
No
Good for dates
No
Wait for OTT
No
Pavithra (Sriya Saran) is the antithesis of the underdog streetwalker. She charges a lakh a night, donates it all to charity, puts the bad guys in prison - and still has time to come up with kickass punch lines (something about how even a prostitute can become the CM if provoked...).

Well, what's the problem then? Not much, except that her MLA customer sends over his son for her to deflower, but the awkward boy decides to marry her, instead, causing the MLA dad to try to kill her. Also, the guy she put in jail for blackmailing prostitutes is trying to get out and kill her, too.

The rest of the story is about how the bad guys, and Pavithra's husband, and pretty much everyone else melt out of the way as and when required.

Janardhan Maharishi spoke in interview after interview about a film about a prostitute that you can watch with your family. He certainly achieved his objective. He also failed to stop viewers from leaving the theatre once they realised that there really wasn't gonna be steam rising off of the screen.

Pavithra's tale of her rise from the streets into politics is almost Disney-like in its simplicity. You'll find all the usual suspects - the bigots, the perverts, the dhongi babas, the corrupt politicians, the corrupt police-walla, the corrupt... A few moments here and there take you by surprise, but they fail to elicit much of a response from the already-bored audience.

And just like the politicians in the movie, the story seems to be cashing in on just about everything the public hates at the moment. Crime against women - check. Fake babas - check. Politicians and their benamis - double check. There's nothing original in there, or even remotely interesting.

The performances are just about okay. Sriya looks lovely as usual, but, really, Anushka plays a far better prostitute. Roja, as an MLA's deaf-mute wife, gives a commendable performance, but you're left clueless as to why her role exists at all.

Tanikella Bharani and co. do as is expected of them. Kaushik Babu vanishes from the screen just when he's getting better. The only performance of note is that of Shivaji, as a sleazy photographer who blackmails girls into prostitution.

The music is mediocre at best, so it is just as well that there isn't much of it. The cinematography has a very TV serial feel to it.

Calling a prostitute Pavithra (pure) is not the only one of this movie's ironies. There are several. But the only one that matters is that this writer watched it in a cinema hall packed to the rafters with men who were there to watch this movie purported to be about women's empowerment for only one reason - to watch the gorgeous Shriya Saran play a hooker. Just as well, because a film this inane could only run by virtue of the bells and the whistles, the belle being Pavithra. As for the whistles, let's leave them to the audience.
Share. Save. Connect.
Tweet
PAVITHRA SNAPSHOT 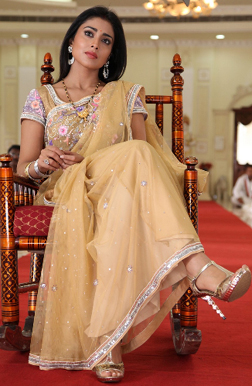 ADVERTISEMENT
This page was tagged for
Pavithra telugu movie
Pavithra reviews
release date
Shriya Saran, Roja Selvamani
theatres list
Follow @fullhyderabad
Follow fullhyd.com on
About Hyderabad
The Hyderabad Community
Improve fullhyd.com
More
Our Other Local Guides
Our other sites
© Copyright 1999-2009 LRR Technologies (Hyderabad), Pvt Ltd. All rights reserved. fullhyd, fullhyderabad, Welcome To The Neighbourhood are trademarks of LRR Technologies (Hyderabad) Pvt Ltd. The textual, graphic, audio and audiovisual material in this site is protected by copyright law. You may not copy, distribute, or use this material except as necessary for your personal, non-commercial use. Any trademarks are the properties of their respective owners. More on Hyderabad, India. Jobs in Hyderabad.