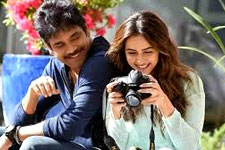 T J Reddy / fullhyd.com
EDITOR RATING
4.0
Performances
Script
Music/Soundtrack
Visuals
7.0
3.0
2.0
3.0
Suggestions
Can watch again
No
Good for kids
No
Good for dates
Yes
Wait to rent it
Yes
The OG Manmadhudu is 17 years old. The film is almost old enough to vote but not quite old enough to drink. By that logic, you are smart enough to make a choice that may influence the lives of 1.2 billion people but not quite smart enough to make a choice regarding your own health and well-being.

Now, you may ask, "Fullhyd, what purpose does this pithy observation serve in your review of Manmadhudu 2?"

The answer to that question is, the original Manmadhudu is chock full of terse comments about the world around us, and our observation is a veiled dig at our film censorship laws. When we were younger, we laughed at our archaic laws while chugging down a whole bottle of beer. But as we grew older, we realised the inane implications of these laws. This is layering, and when applied to cinema, it helps us view a certain piece of art through different prisms as we grow older.

Manmadhudu works quite the same way - when we first laid eyes on it, we laughed at Abhiram, S Lavangam and their hilarious antics. But as time has gone by, we learnt about the subtext hidden beneath those hysterical lines. Trivikram and Vijay Bhaskar took a skewer to traditional masculinity, toxic relationships and gender roles, stacked their critiques up neatly, and served us a delicious kebab without ever coming off as preachy.

With Manmadhudu 2 (a sequel in name only and a remake of the French movie I Do) director Rahul Ravindran attempts to do the same. His main character, Samba Siva Rao aka Sam (Nagarjuna Akkineni), makes the perfumes women wear by day and charms them with his knowledge of said perfumes by night. He has a doting family led by his mother and flanked by his three sisters. His family's sole intention is to see him find a companion to share his life with.

Sam's intentions, however, are far too removed from theirs. He prefers living his carefully curated bachelor lifestyle. To keep it that way, he hires aspiring poet / present-day waitress Avantika (Rakul Preet Singh) to act as a toxic girlfriend who would ward off his family's noble cause. But age-old rom-com logic dictates that no one's plans go quite according to what they envisioned, which subsequently leads to on-screen comedy.

Many a comedian has described comedy as tragedy plus time. Manmadhudu 2 is an exercise in actualising that sentiment. The film begins with a tried, tested and tired scene where our hero makes light of the comedic supporting actor. Then the movie moves on to tell us about his occupation, his family and his womanising ways, and finally tops this all off by throwing in a line that reassures us that this person has a "good heart".

Establishing this character and his motivations (as vague as they are) takes about 10 minutes of screen time. And lest we forget, the film hasn't taken a clear stance on its style of comedy or tone just yet.

Now let's compare that with this with the first sequence from this movie's namesake original. Manmadhudu opens with the line "Ithanu magadu" (he is a man). Subverting this line's pompous nature is the main character unintentionally exposing himself and scrambling to cover up. In about 5 seconds, the filmmakers make us privy to the tone and comedic style they are going for. This is a dissection of this MAN's veneer of invulnerability and its inherent silliness. At about the one-minute mark, the audience is aware of Abhiram's relationship with the world around him. He is not a likeable character. However, we are asked to reserve our judgements and accompany this broken man on his journey of redemption thanks to the normalising effect brought forth by the people around him.

The clarity shown in the second example is nowhere to be found in the first. Add to that the fact that almost every character is played for laughs in Manmadhudu 2 with no foil in sight, and sure enough, we are dropped squarely in the middle of a film that writes itself into a corner every ten minutes. The primary motivations seem cobbled together at best, the narrative flow is constantly hampered, and this is tragic.

But as time progresses, the actors allow the audience to acclimate themselves to their antics and the inconsistent writing. Rakul Preet Singh plays a better version of her character in De De Pyaar De. Seasoned screen veterans Jhansi, Devadarshini, Vennela Kishore, Rao Ramesh and Lakshmi (who centres the film with emotional depth) are well-versed in the art of holding a viewer's attention even with limited characterization, and every single one of them makes hay with the limited amount of sunshine they are afforded.

Speaking of which, someone needs to explain to me why my eyes were hooked to Nagarjuna when sultry European ladies were all around him? How does a 60-year-old man have more charm and likability than most of our modern crop of leading men? How does this man make us empathise with the most reprehensible of characters while acting so over-the-top? What is it about him that makes us buy into his relationship with the much younger Rakul Preet Singh hook, line and sinker? Are we blinded by his looks or his talents or both?

While we ponder over these questions, let us spare a thought for this movie's inconsistent visual presentation. The film is shot primarily in Portugal, but makes it abundantly clear that not all actors were always present in the same location at all times. The poorly rendered composite shots and a clear lack of traditional establishing shots rob this movie of a sense of space. The characters are seemingly everywhere and nowhere at the same time.

This is doubly frustrating because the movie shows glimpses of visual flair. Specifically, a conversation between Sam and Avanthika is shot with a swelling camera that breaks the 180-degree rule with such élan that one might mistake Nolan for guest directing this section of the film.

And that is Manmadhudu 2 in a nutshell - it has fleeting glimpses of brilliance lost in a sea of predictability. It acknowledges female sexuality, makes light of its lead character, and applies different comedic styles when trying to find its way out of chasms of its own making, and we appreciate it for that and laughed along with it from time to time.

But if comedy is tragedy plus time, Manmadhudu 2 is the equivalent of peeling an onion. Once the crusty outer layer is gone, all we have left is layer upon of layer of an onion that elicits a singular reaction no matter how long the peeling continues. The original roasted and stacked its onion slices between its meaty kebab pieces which made it instantly delectable. This film peels its onion but doesn't do much else with it. Sometimes an onion is just an onion.
Share. Save. Connect.
Tweet
MANMADHUDU 2 SNAPSHOT 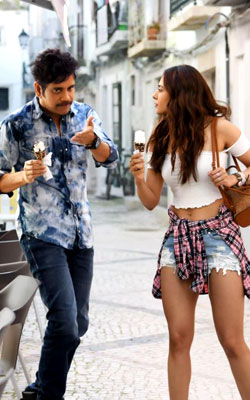 See Manmadhudu 2 full details
MANMADHUDU 2 USER REVIEWS
1 - 1 OF 1 COMMENTS
POSITIVE  |  NEGATIVE |  NEWEST  |  OLDEST  |  MOST HELPFUL  |  LEAST HELPFUL
rahulsachinsourav123 on 11th Aug 2019, 10:28am | Permalink
This is what is called royal screw up of original brand. Without Lavangam, Trivikram's writing and nice music, Manmadhudu was nothing. Nagarjuna thinks he was the main reason that one was such a blockbuster. He looked such a Despo in this one, with no more charm whatever, looking constipated while uttering romantic dialogues and giving clueless expressions in comic scenes. He should start taking roles of his age going forward, if he wants himself to be received positively.
varun on 12th Aug 2019, 2:58am | Permalink
to add to this:

ADVERTISEMENT
This page was tagged for
talugulo manmadudu2full movie
manmadhudu 2 revie fullhyderabad
Manmadhudu 2 telugu movie
Manmadhudu 2 reviews
release date
Follow @fullhyderabad
Follow fullhyd.com on
About Hyderabad
The Hyderabad Community
Improve fullhyd.com
More
Our Other Local Guides
Our other sites
© Copyright 1999-2009 LRR Technologies (Hyderabad), Pvt Ltd. All rights reserved. fullhyd, fullhyderabad, Welcome To The Neighbourhood are trademarks of LRR Technologies (Hyderabad) Pvt Ltd. The textual, graphic, audio and audiovisual material in this site is protected by copyright law. You may not copy, distribute, or use this material except as necessary for your personal, non-commercial use. Any trademarks are the properties of their respective owners. More on Hyderabad, India. Jobs in Hyderabad.