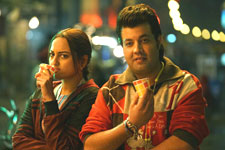 Punarvasu Pendse / fullhyd.com
EDITOR RATING
5.0
Performances
Script
Music/Soundtrack
Visuals
6.0
5.0
5.0
7.0
Suggestions
Can watch again
No
Good for kids
Yes
Good for dates
Yes
Wait for OTT
Yes
Bollywood has been experimenting with films that deliver a message on topics that are often taboo in Indian society. Khandaani Shafakhana is one such attempt - to spread awareness about sexual health, in a manner that is engaging and light-hearted but not overly preachy. Debutant director Shilpi Dasgupta has also made some interesting choices that shape the narrative of the movie. For example, the conscious decision to do away with a male protagonist meant that the focus of the movie would be squarely on Sonakshi Sinha, which is not something seen often in Bollywood.

Baby Bedi (Sonakshi Sinha) has been bequeathed her uncle's sex clinic, or his Khandaani Shafakhana, under the condition that she has to oversee its smooth operation for six months past his death in order to not inconvenience his regular patients. Aided by her slacker brother Bhooshit (Varun Sharma), Baby agrees to the proposal of lawyer Tangra (Annu Kapoor) and plunges headfirst into reviving her inheritance.

Despite significant discouragement from society at large, and her mother in particular, Baby takes steps to widen the clinic's reach, and campaigns for awareness regarding sexual health - encouraging people to talk about sex without stigmatising it. Branded as a corrupting influence, Baby is issued summons, and facing hostility from all sides, before help arrives from the most unexpected quarters.

There would have been so much to talk about Khandaani Shafakhana had it really explored the topics it speaks about - the pain, in a conservative society, of men and women who face sexual health problems, and the shackles Indian society places upon women who dare to speak out on topics that are taboo in open society.

Alas, the movie only briefly touches over any of those points, and is instead content with making fun of men with sexual health issues (although not maliciously). The script tries a bit too hard to take away from the gloomy reality of the topic it wants to tackle, and makes Sinha seem far too often like a doe-eyed girl than the resolute woman with a plan that her character warrants. The aforementioned humour is also forced at times, especially an unwarranted gay joke that clearly takes away from the intended message.

Sonakshi Sinha handles a meaty but averagely written role with conviction - though her Punjabi girl act is a little unconvincing. She is at her best when she is in the titular Shafakhana, and interacting with her Lemon hero (Priyanshu Jora).

Jora has too small a role, with his character literally not being mentioned by name, to analyse it properly. Varun Sharma seems like he is intent of being typecast as the "fukra" youngster lamenting his lack of a marriage partner.

Annu Kapoor is involved yet again in a movie where a sex clinic is at the centre of the story, but this time he plays a lawyer who channels Captain Haddock (hearing him say "nincompoop" in a Punjabi twang is a rather unique experience) in a very entertaining role.

Badshah is the surprise package here, playing a rapper who happens to suffer from erectile dysfunction. He is very much at ease in front of the camera, and could possibly play much bigger roles in the future.

The music is average, with nothing that grates on your ears during the movie, but nothing that stands out afterwards either. Ironically, it is the Diana Penty-featuring remix of "Shehar Ki Ladki" that doesn't even feature in the main movie, that is appearing on charts.

In a time where films like Vicky Donor and Ek Ladki Ko Dekha To Aisa Laga handled sensitive topics in an entertaining way, Khandaani Shafakhana falls short of its intended target. That being said, it is definitely a "sex film for the whole family" as advertised. It should just have been a bit better for us to wholeheartedly recommend it.
Share. Save. Connect.
Tweet
KHANDAANI SHAFAKHANA SNAPSHOT 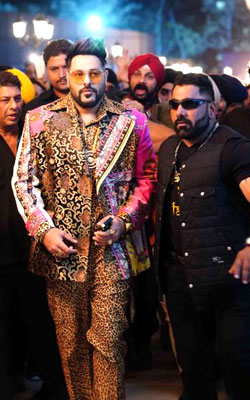 ADVERTISEMENT
This page was tagged for
is khandaani shafakhana for kids?
khandaani-shafakhana full movie in hindi watch now
khandaani shafakhana 9xm movies
Khandaani Shafakhana hindi movie
Khandaani Shafakhana reviews
Follow @fullhyderabad
Follow fullhyd.com on
About Hyderabad
The Hyderabad Community
Improve fullhyd.com
More
Our Other Local Guides
Our other sites
© Copyright 1999-2009 LRR Technologies (Hyderabad), Pvt Ltd. All rights reserved. fullhyd, fullhyderabad, Welcome To The Neighbourhood are trademarks of LRR Technologies (Hyderabad) Pvt Ltd. The textual, graphic, audio and audiovisual material in this site is protected by copyright law. You may not copy, distribute, or use this material except as necessary for your personal, non-commercial use. Any trademarks are the properties of their respective owners. More on Hyderabad, India. Jobs in Hyderabad.