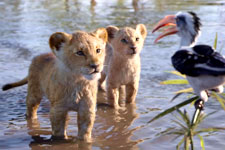 Punarvasu Pendse / fullhyd.com
EDITOR RATING
8.0
Performances
Script
Music/Soundtrack
Visuals
8.0
7.0
7.0
10.0
Suggestions
Can watch again
Yes
Good for kids
Yes
Good for dates
Yes
Wait for OTT
No
Life throws us a curve-ball sometimes, when the familiar path we tread is suddenly revamped or replaced by something newer, often made possible by technology. Oftentimes we tend to resist this change and hold on to our memories, because nostalgia is one helluva drug. So on trudged 26-year-old me with anticipation, with the six-year-old me following with apprehension.

For a second time in under a month (after Toy Story 4), Disney has ripped apart our inherent cynicism when it comes to Hollywood and its various marketing departments. Director Jon Favreau is back with another live-action remake after the highly successful The Jungle Book, and we hope he forgives us for doubting his vision again.

The Lion King is a classic, a story that not many people need an introduction to. To those who have missed out, though, it is the story of lion cub Simba (Donald Glover) - the heir to the Pride Lands. The idyllic, playful life of the young one who "can't wait to be king" is thrown into chaos after losing a loved one and being wrongfully banished from his kind.

Simba is helped by his childhood friend, the lioness Nala (Beyoncé Knowles-Carter), along with the unlikely duo of meerkat Timon (Billy Eichner) and warthog Pumba (Seth Rogen), to overcome his demons and return to his rightful kingdom to thwart the evil that has fallen upon it. Pitted against his uncle Scar (Chiwetel Ejiofor) and his hyenas, Simba must enlist the help of all his friends and the advisors of his father Mufasa (James Earl Jones) - hornbill Zazu (John Oliver) and the wise mandrill Rafiki (John Kani).

The Lion King is a deceptively complex script at heart, loosely inspired by William Shakespeare's Hamlet, that is bundled into an entertaining package for the younger audiences which Disney movies primarily attract. The sense of wonder that hit those old enough to remember the 1994 version (while too young to watch it at release, I remember The Lion King as one of my first English language films, and it is indeed a special film) is perhaps a little missing this time around - possibly because the darker theme was better disguised by cutesy animation than the photo-realism of live-action. The 2019 Lion King, despite this, manages to appeal to both the twenty-/thirty-something millennial fans as well as the new generation of kids who find themselves immersed in the African savannah.

Speaking of immersion, The Lion King is a visual masterpiece. The amount of care and detail that has gone into crafting this movie can only be described as fanatical - we could almost feel some of the things that we saw on the screen, such as the flapping of a beetle's wings or the wind rustling the hair in Simba's rather impressive mane. It almost seems like the makers wanted us to focus more on this visual aesthetic of the movie - the opening sequence features a regular menagerie of animals one can be forgiven for thinking are real, such is the artistry.

A very talented cast of actors (and singers - don't forget that The Lion King is also a musical) also helps. Some, like John Oliver, embody their role, while others, like Donald Glover, take a more subtle approach. Beyoncé Knowles-Carter is the firebrand Nala, and Queen Bey easily flows into powerful duets with Childish Gambino (Glover's hip-hop stage name) that shake up the theatre. Chiwetel Ejiofor sounds sinister as the cunning, mangy Scar, and James Earl Jones is commanding and majestic as Mufasa. Seth Rogen and Billy Eichner do the "Timon and Pumba" bits with conviction, although the writing could have made more use of their fantastic comic timing.

This is the first time where we felt that a soundtrack by Hans Zimmer was just good, as opposed to being magnificent, arguably because his score for the 1994 film was quite on another level. Sir Elton John (and the original film's lyricist Tim Rice) also returns, reworking some of his songs and writing new material especially for this version, ably assisted by Beyoncé.

We cannot fault those who feel that the magic is missing, but there is more than one way to enjoy a story. Maybe, just maybe, it's time to take off the rose-tinted glasses, and enjoy the spectacle.
Share. Save. Connect.
Tweet
THE LION KING SNAPSHOT 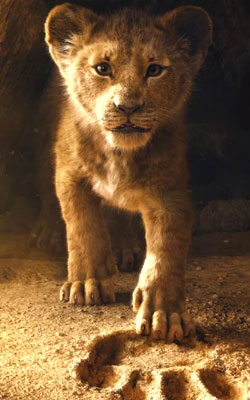 See The Lion King full details
THE LION KING USER REVIEWS
1 - 1 OF 1 COMMENTS
POSITIVE  |  NEGATIVE |  NEWEST  |  OLDEST  |  MOST HELPFUL  |  LEAST HELPFUL
USER RATING
5.0
1 USER
Performances
Script
Music/Soundtrack
Visuals
NA
NA
NA
NA
Can watch again - NA
Good for kids - NA
Good for dates - NA
Wait for OTT - NA
vara on 7th Aug 2019, 12:20pm | Permalink
I watched this with my two kids (7 and 5) both of them did not like the move. They felt scared at times because of how the hyenas are shows, too dark and too serious. Simba is not look lovable and innocent any more, he just looks like any other lion cub as the "reality" look killed those two aspects.
RATING
5
Punarvasu Pendse on 21st Aug 2019, 11:11pm | Permalink
I didn't notice this before, or I would have responded much earlier.

This was a really interesting point you put across. Yes, the live-action movie did make Simba look less friendly than the original animated version.
I'll keep that in mind when I write another review for a movie directed at children.

ADVERTISEMENT
This page was tagged for
kingenglishmove
The Lion King movie theaters in Hyderabad
The Lion King english movie
The Lion King reviews
release date
Follow @fullhyderabad
Follow fullhyd.com on
About Hyderabad
The Hyderabad Community
Improve fullhyd.com
More
Our Other Local Guides
Our other sites
© Copyright 1999-2009 LRR Technologies (Hyderabad), Pvt Ltd. All rights reserved. fullhyd, fullhyderabad, Welcome To The Neighbourhood are trademarks of LRR Technologies (Hyderabad) Pvt Ltd. The textual, graphic, audio and audiovisual material in this site is protected by copyright law. You may not copy, distribute, or use this material except as necessary for your personal, non-commercial use. Any trademarks are the properties of their respective owners. More on Hyderabad, India. Jobs in Hyderabad.