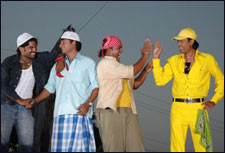 Ravi Mundoli / fullhyd.com
EDITOR RATING
3.0
Performances
Script
Music/Soundtrack
Visuals
NA
NA
NA
NA
Suggestions
Can watch again
NA
Good for kids
NA
Good for dates
NA
Wait to rent it
NA
We really didn’t have to write this review – all we had to do was to copy-paste what we wrote about Hyderabad Nawabs and change the names of the characters. It would’ve been wonderful if we could’ve said that Kal Ka Nawaab is to The Angrez as Return Of The Jedi is to Star Wars, but alas, it is not to be.

The Angrez worked, at least for many Hyderabadis, because it vividly brought to screen the audience’s image of their own city. After being fed Bambaiyya for years and years, it was a novel experience to hear our yaaron effortlessly throw out kaikoos and nakkos.

But after a point, no matter how much you love the city you live in, there’s only so much of idle banter that you can take. And this is precisely Kal Ka Nawaab’s problem. The storyline is as credible as one of Salim Pheku’s priceless phattas, and the film basically is a long sequence of tenuously connected scenes where 4 friends from the Old City sit around and chat.

Best friends Hafiz, Jilani, Qayoom and Kabza are a fruit seller, an auto driver, a tea vendor and a purveyor of plastic goods (and part time shaayar) respectively. Barely competent at running their own businesses, they spend most of the day hanging out with each other and dream of ways in which they can become rich.

Having established this, the movie goes on to show us a few of the schemes they come up with, including trying to get the proverbial jobs in Dubai, and the proverbial pataofying of rich girls while hanging out outside a women’s college. While all this is going on, they end up getting indebted to a henpecked pehelwaan, and Hafiz falls for Shaheen, whose riches could potentially help them get out of the trouble they’re in.

As far as story goes, that’s about it really, and while pushing this sketchy plot forward, our heroes end up having several conversations in Hyderabadi which are supposed to be funny, but sadly ends up in roughly the same terrain as Hyderabad Nawabs. If you’ve seen Hyderabad Nawabs, you’ll probably end up with a life-threatening case of, “Haven’t I seen this before?” while watching Kal Ka Nawaab.

Like we said, at this point the temptation to reproduce the Hyderabad Nawabs review is almost irresistible. It is almost as though the moviemakers read that and made a movie that faithfully does everything that we said was wrong with Hyderabad Nawabs. The wafer-thin plot, the gratuitous vulgarity, the attempt at humor via gaalis, the lack of continuous entertainment, the slow progression, the cleavages and the loose morals are all present in industrial quantities. Indeed, the few times that you laugh, it is more because of the lingo than the jokes themselves.

The 4 main characters are played with a degree of aplomb, but nevertheless it is all stuff you’ve seen before, and so doesn’t hold your attention. There are some honestly laugh-out-loud funny bits (some of Kabza’s shaayiri, for example) but these come at approximately the same intervals as India’s World Cup victories. The plot is apparently not the only thing that’s wafer thin about Kal Ka Nawaab – the budget is also appears wafer thin, and possibly because of this the whole movie has a very amateurish feel to it.

Finally, we can’t say this too many times – the only reason to watch this movie is if you didn’t get enough of the Angrez / Hyderabad Nawabs characters. And if you do go to see it, choose the matinee show. At least the fact that you spent a couple of peak temperature hours in the relative coolness of the theater will be consolation.
Share. Save. Connect.
Tweet
KAL KA NAWAAB SNAPSHOT

ADVERTISEMENT
This page was tagged for
Kal Ka Nawaab hindi movie
Kal Ka Nawaab reviews
release date
Toyajakshi, Zakir
theatres list
Follow @fullhyderabad
Follow fullhyd.com on
About Hyderabad
The Hyderabad Community
Improve fullhyd.com
More
Our Other Local Guides
Our other sites
© Copyright 1999-2009 LRR Technologies (Hyderabad), Pvt Ltd. All rights reserved. fullhyd, fullhyderabad, Welcome To The Neighbourhood are trademarks of LRR Technologies (Hyderabad) Pvt Ltd. The textual, graphic, audio and audiovisual material in this site is protected by copyright law. You may not copy, distribute, or use this material except as necessary for your personal, non-commercial use. Any trademarks are the properties of their respective owners. More on Hyderabad, India. Jobs in Hyderabad.