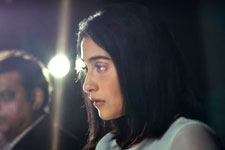 T J Reddy / fullhyd.com
EDITOR RATING
6.0
Performances
Script
Music/Soundtrack
Visuals
6.0
5.0
8.0
7.0
Suggestions
Can watch again
No
Good for kids
No
Good for dates
Yes
Wait for OTT
No
How do you tell a lie? Do you weave an intricate web rife with characters, stories and incidents, or do you keep it simple and limit it to one line to not leave many loose ends? Does your preference change depending on the circumstance or do you stick to your basic principles all the same?

All of us have answers to these questions because each one of us lies, in our own special way. And to anyone that says "I don't lie", I'd like to personally welcome you to our ever-expanding club because that line is your first lie.

Every human being likes being perceived a certain way because when you are a part of a society, perception is reality. Sameera Mahaa (Regina Cassandra) likes to be perceived as a hero. She is a survivor of sexual assault. But according to her, she did more than just survive. She took it upon herself to eliminate her assailant by lodging two bullets deep into his cold, black heart. Even though she is being investigated for murder, she stands firm on her stance that this is what her assailant deserved. This is a character every one of us can get behind based on her struggle, her will to put that past her and her drive to live her life with her head held high.

However, the courts don't need a story, they need proof. The previous paragraph tells us what Sameera knows, but not what she can prove. To help her get her ducks in a row, her lawyer requests the assistance of corrupt cop Vikram Vasudev (Adivi Sesh). For a small fee of Rs 20 lakhs per idea, Vikram helps Sameera get her story in line with what the courts would like to hear. As Vikram questions and cross-questions Sameera based on the information he has collected through the course of his cursory investigation, the strength of Sameera's house of cards is put to test.

Sameera's house of cards and the plot of Evaru (based on the Spanish film The Invisible Guest) are subject to our scrutiny simply because of the high number of variables required to make this whodunnit what it is.

When you think about the best lock-box mysteries, your mind will race back to Hitchcock's Rear Window and Dial M For Murder, or Dame Agatha Christie's And There Were None and Murder On The Orient Express. The most important aspect of these stories is their ability to contain their sprawl. There are only a handful of primary characters who are cooped up in one location. By setting their boundaries so clearly, these stories don't give nitpickers like us much room to poke holes at the fabrics of their plots. Evaru is a sprawling story whose scenes occur at multiple locations which bring in a higher degree of improbability to the events of the plot. There are just too many variables for the plot to happen as it does without a hefty dose of convenience and cover-ups.

However, to its credit, Evaru draws a boundary around itself by sticking to a sub-two-hour runtime. The events of the film unfold at such a break-neck pace that you might be compelled to keep up with the film rather than stop and think about how one scene connects to the next. The web of lies and intrigue extends so far and wide that the audience has no option but to hang onto Vikram and Sameera as they lie through their teeth at every hook, bend and corner.

To achieve this outcome, the people telling us these half-truths and whole lies need to deliver engaging performances. A person's delivery of the lie is as important as the lie itself. Adivi Sesh and Regina Cassandra are enlisted to act the part of serial manipulators Vikram and Sameera. To their credit, they lie to the audience fairly well. They are stern when they need to be and funny when they need to be, and play to the galleries when all else fails.

However, they don't seem to be very good when lying to their peers. Sesh's and Cassandra's flaws as actors come to the fore when they are required to show subtler emotions. With bombast finding its way out the door, they are forced to dig deep to deliver something genuine and heartfelt. Sadly, this is where they come up short, and in turn, the film's emotional resonance dissipates into the ether like our main characters' morality. Add to this the one-note performance of Naveen Chandra, and the movie's watchability teeters precariously on the precipice as it stares down into the abyss.

Making this staring contest appealing is Sricharan Pakala's score. His BGM is deliberately designed to manipulate an audience into feeling a certain emotion. The music blaring out the surround sound system is so powerful that it nullifies the bad aftertaste brought forth by weak acting and inconsistent plotting. While we are first in line to complain about Telugu cinema's insistence on using overblown music to enhance underwritten characters, we choose to give Evaru's score a pass as it provides much-needed patchwork to a film that is trying to tell a proper story.

And lest we forget, the cinematography and set design are eerily reminiscent of Goodachari. Evaru masks its deficiencies by using a subtle visual reminder to a film the audience enjoyed. Well played, Venkat Ramji and team.

And with that, we present to you, all the whole truths, half-truths and blatant lies Evaru and its characters have on offer. Your enjoyment of this movie may be based on what sorts of lies are effective on you and what sorts of lies you tell yourself when convincing yourself about why you like a certain piece of art. Because art is impartial. It merely exists. How we choose to perceive it is what makes it either good or bad. And as we said before, perception is reality.
Share. Save. Connect.
Tweet
EVARU SNAPSHOT 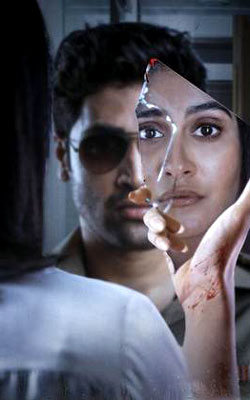 ADVERTISEMENT
This page was tagged for
Evaru telugu movie
Evaru reviews
release date
Adivi Sesh, Naveen Chandra
theatres list
Follow @fullhyderabad
Follow fullhyd.com on
About Hyderabad
The Hyderabad Community
Improve fullhyd.com
More
Our Other Local Guides
Our other sites
© Copyright 1999-2009 LRR Technologies (Hyderabad), Pvt Ltd. All rights reserved. fullhyd, fullhyderabad, Welcome To The Neighbourhood are trademarks of LRR Technologies (Hyderabad) Pvt Ltd. The textual, graphic, audio and audiovisual material in this site is protected by copyright law. You may not copy, distribute, or use this material except as necessary for your personal, non-commercial use. Any trademarks are the properties of their respective owners. More on Hyderabad, India. Jobs in Hyderabad.