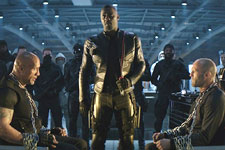 T J Reddy / fullhyd.com
EDITOR RATING
3.0
Performances
Script
Music/Soundtrack
Visuals
6.0
2.0
3.0
4.0
Suggestions
Can watch again
No
Good for kids
No
Good for dates
No
Wait to rent it
Yes
A great man once said, "If you judge a fish by its ability to climb a tree, it will live its whole life believing that it is stupid." In simple metaphorical terms, this new instalment in the Fast And Furious franchise is the fish, and good filmmaking is the tree. A film from this franchise will never climb said tree because that is not its primary objective. On the contrary, its primary objective is to entertain an audience with mindless action and the artifice of emotion, and by using the word "family" about 344,543 times.

Speaking of primary objectives, there exists a virus that can wipe out a sizable population off the face of the earth. Hattie Shaw (Vanessa Kirby) makes it her primary objective to infect herself with the virus to keep it away from Brixton Lore (Idris Elba). Brixton works for a shady agency called Eteon whose primary objective is to obtain the virus and hold the world to ransom with it. The objectives of Luke Hobbs (Dwayne Johnson) and Deckard Shaw (Jason Statham) in this film are to keep Hattie and the virus away from the clutches of Brixton and Eteon.

And our primary objective is to understand why this fish keeps trying to climb that darn tree even though it knows it doesn't need to.

Hobbs And Shaw is a weird mashup of the script of a Fast And Furious movie, the sensibilities of a David Leitch vehicle and the jokes about male genitalia from a Seth Rogen joint. It is a walking, talking, punching, kicking, screaming display of sheer lunacy on the silver screen that refuses to aspire to "a child playing with toy cars" level of storytelling.

Riddle me this dear reader, Hattie Shaw injects the virus into herself to keep the bad guy from getting his grimy hands on it. She escapes his grasp in each and every one of their encounters. So, we ask, what was the point of injecting herself with it? Why not carry the vial? Why create a ticking clock when there was no need to? And need we remind you, this isn't the last leap in logic.

Riddle number 2: A scene from the trailer. Hobbs And Shaw beat up a room full of bad guys and use their beaten-up mugs to pop open a door held closed by a retinal scanner. Shaw keeps failing in his attempts. The man does not open the eye of the bad guy when pointing him at said scanner. This scene is played for comedy. It is funny but not in the way the film intends it to be. I, for one, tossed my hands up in the air and laughed at the sheer idiocy displayed by the acting and directing departments. And lest we forget, this isn't the last time such idiocy is displayed on screen at full force.

And finally, riddle number 3: Why does this fish keep trying to climb that darn tree by having its villain spout generic lines about how humans are destroying the planet and the only way to save humanity from itself is to exterminate it all at once? Who is Brixton as a person? What other character traits does he have other than being played by Idris Elba? Why should we care about his cause?

The film gives us reasons to care about Hobbs And Shaw by having them interact with their families in the most stereotypical of ways, but the filmmakers don't extend the same olive branch to Stringer Bell. The film presents us with a villain whose calls himself "the bad guy" when he clearly believes that his actions are that of a do-gooder. With muddled writing like this, the film can thank its A-list action stars for keeping its over 2-hour runtime ticking along fairly reasonably.

For all its phallic humour and nonsensical action sequences (which we will get to), the charm of The Rock and The Transporter guide the audience to the Isle Of Samoa, a location that differentiates Hobbs And Shaw from its predecessors. The homely and laid-back nature of the island, the familiar warmth of a Samoan grandmother and some creative set pieces make for a half-decent third act that aims at sending the viewers into raptures.

However, it is only a half-decent sequence.

The other half follows in line with all the other action sequences sprinkled across the length of the film. Gone are those wide-shot-filled hand-to-hand combat scenes from Leitch's Atomic Blonde, gone is the self-deprecatory humour-laced dialogue from Leitch's Deadpool 2, and nowhere to be found is an action star as committed to performing the stunts as Keanu Reeves did in Leitch's John Wick. Hobbs And Shaw has none of these elements but has a crew of actors who are contractually obligated to never lose a fight in any of their films.

With handicaps like this, an inconsistent colour palette, some truly horrendous CGI for a film whose budget is $200 million, pop songs taking the place of a well-composed score, and a final fight scene that looks like it was shot on a soundstage instead of a Samoan jungle, Hobbs And Shaw lacks the slick production value and a consistent visual tone that the previous entries in the franchise always seemed to maintain.

With so many individual aspects of this film and all that came before directing the fish towards the nearest stream of water, the fish distracts itself with every new tree it sees along its path. It wants to climb the espionage tree, the drama tree, the comedy tree, the cameo tree and so many more, when swimming through a stream of bullets and NOS would have sufficed.

I laughed to myself when my schoolteachers told me that I had the attention span of a goldfish. I have now seen a visual representation of it. I finally relate to their frustration.
Share. Save. Connect.
Tweet
FAST & FURIOUS :... SNAPSHOT
FAST & FURIOUS : HOBBS & SHAW (HINDI) SNAPSHOT 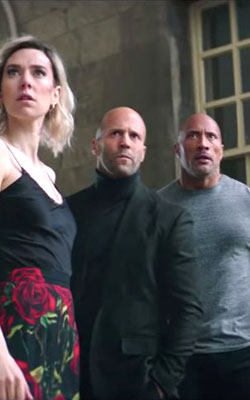 ADVERTISEMENT
This page was tagged for
Hoobs and shaw hindi
fast and furious hobbs and shaw full movies in hindi
fast and furious 5movi hidi
fast and furious Hindi movie
fast and furious ka Hindi 6
Follow @fullhyderabad
Follow fullhyd.com on
About Hyderabad
The Hyderabad Community
Improve fullhyd.com
More
Our Other Local Guides
Our other sites
© Copyright 1999-2009 LRR Technologies (Hyderabad), Pvt Ltd. All rights reserved. fullhyd, fullhyderabad, Welcome To The Neighbourhood are trademarks of LRR Technologies (Hyderabad) Pvt Ltd. The textual, graphic, audio and audiovisual material in this site is protected by copyright law. You may not copy, distribute, or use this material except as necessary for your personal, non-commercial use. Any trademarks are the properties of their respective owners. More on Hyderabad, India. Jobs in Hyderabad.