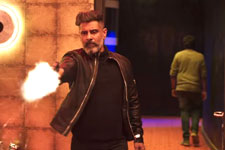 T J Reddy / fullhyd.com
EDITOR RATING
3.0
Performances
Script
Music/Soundtrack
Visuals
4.0
3.0
5.0
5.0
Suggestions
Can watch again
No
Good for kids
No
Good for dates
No
Wait for OTT
Yes
As the third act of Mr KK / Kadaram Kondan comes to a close, Aathira (Akshara Haasan) gives birth to a baby girl. Vasu (Abi Hassan) is overjoyed at the birth of his child and spends a quiet moment with his wife. Breaking the silence, she asks him (and we are paraphrasing here), "What happened today that resulted in me getting kidnapped, beaten up, nearly shot, threatened by both cops and gangsters, and almost thrown out of a window?" To which he replies, "I tried calling your mother."

This exchange was supposed to add a moment of levity to a film that relentlessly puts its lead characters in the crosshairs of some very dangerous people. While it fails at its primary endeavour, what it succeeds at doing is reminding an audience that through a hail of bullets and a web of conspiracy, this throwaway line and Vikram's Mr KK throwing himself off the Petronas Towers will remain the movie's most memorable moments.

Speaking of which, the movie opens with a salt-and-peppered Vikram smashing through a window in the Petronas Towers and falling to his certain doom. But he is an assassin par excellence, and so manages to avert his demise for the time being.

Soon after, he is chased through a tunnel by a couple of goons with guns. With his doom seeming imminent yet again, Mr KK lives to fight another day by stepping into the path of an oncoming motorcycle. He injures himself in the process, but attracts a group of bystanders. As the onlookers create some separation and cart him off to a hospital, we are left wondering who this mysterious man is, who his pursuers are, and what his connections are to the seemingly innocent couple of Vasu and Aathira.

120 minutes later, we are no privier to Mr KK and his ways than we were in minute 1. However, Vikram does so much with the precious little that the script affords him. On the other side of the coin are Abi Hassan and Akshara Haasan who do so little with so much. From our vantage point, Mr KK, the film (based on the French film Point Blank), is a case study in the difference between good and bad acting, and how that can adversely affect even the most intricate of stories.

Mr KK's plot is filled to the brim with morally grey characters, corruption, deception, extortion, exploitation and many more words of the ilk which would make for a rhythmic rap number. Director Rajesh Selva brings these elements to life with a presentation style that harkens back to Asian cinema of old. The colours are neither saturated nor desaturated, the camera doesn't roam around in an attempt to hyper-realise the setting, and the characters drip sweat and blood in equal measure. Every falling bullet casing and every footstep is carefully Foley-ed into the film. The world is designed to be a snapshot of our own. However, what we have in our world that Mr KK's doesn't are people reacting to their plights in realistic and affecting ways.

Vasu is, and will probably remain, one of the most insufferable and annoying primary characters ever put to film. His whining, his whinging, his words, his actions, his emotions (the lack of them, that is), his problems, his happiness, his sadness, his despair and anything else about him are conveyed to the audience so unconvincingly that you wish for a bullet between his eyes. Had he met his maker, the film would have gained some real stakes and momentum at the expense of one annoying character that endlessly spouted out cliched "I'm a good guy in a bad situation" lines. When the best character interaction of the film is one between Mr KK and a random child on a bus and not the two main characters, the final product has some major problems.

Speaking of Mr KK, Vikram's immense charisma and screen presence save the film from becoming an absolutely unwatchable experience. The man conveys more with his stares and glances than most other actors in this movie convey with their words and actions. The sheer disparity in calibre is evident with every shot the supporting cast shares with the seasoned screen veteran.

A select few of you might be wondering why we are diving so deep into this film's performances and not much else. As a response, we would ask you to offer us a detailed explanation of the plot of The Usual Suspects. Go ahead, take your time. Hard, isn't it?

Even though the plot of that film meandered to a dizzy degree, the characters and actors kept us hooked to their journeys by the power of their performances. The music, the cinematography, the sound design, the shot structure and the other crafts of filmmaking took a backseat to the stellar acting at hand. We tried to solve the puzzle simply because the characters made the puzzle so appealing.

With Mr KK, the central piece of its puzzle is quite alluring but everything else around it comes off as bland. The blandness does not readily offer itself to sharp comedy or smart dissection. It lies there, looking uninteresting and making us feel uninterested. When a quick glance at the world around us offers us many more stimulating alternatives, spending a second longer thinking about this movie feels like a disservice to all those other options.
Share. Save. Connect.
Tweet
KADARAM KONDAN (TAMIL) SNAPSHOT 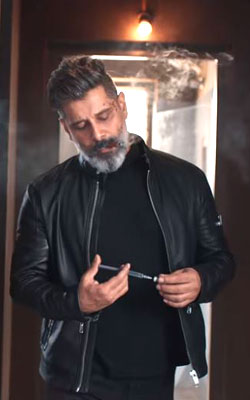 ADVERTISEMENT
This page was tagged for
Kadaram Kondan (Tamil) tamil movie
Kadaram Kondan (Tamil) reviews
release date
Vikram, Akshara Haasan
theatres list
Follow @fullhyderabad
Follow fullhyd.com on
About Hyderabad
The Hyderabad Community
Improve fullhyd.com
More
Our Other Local Guides
Our other sites
© Copyright 1999-2009 LRR Technologies (Hyderabad), Pvt Ltd. All rights reserved. fullhyd, fullhyderabad, Welcome To The Neighbourhood are trademarks of LRR Technologies (Hyderabad) Pvt Ltd. The textual, graphic, audio and audiovisual material in this site is protected by copyright law. You may not copy, distribute, or use this material except as necessary for your personal, non-commercial use. Any trademarks are the properties of their respective owners. More on Hyderabad, India. Jobs in Hyderabad.