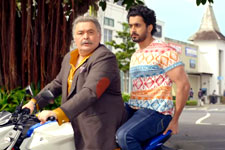 Punarvasu Pendse / fullhyd.com
EDITOR RATING
1.5
Performances
Script
Music/Soundtrack
Visuals
3.0
1.0
1.0
1.0
Suggestions
Can watch again
No
Good for kids
No
Good for dates
No
Wait for OTT
No
The '90s were a great time for in-your-face, inappropriate comedy films. These films epitomised tasteless humour. As time progressed, comedy became a little more refined, giving rise to the relatable slice-of-life comedies that took over at the turn of the millennium. Recently, we are getting quirkier humour, like in Mard Ko Dard Nahi Hota.

That is not to say that Bollywood is completely experimenting - we have films like Total Dhamaal that bring it to a screeching halt. But even these pale in comparison with Jhootha Kahin Ka, which actually falls on the side of regression.

Yograj Singh (Rishi Kapoor) is a your quintessential Punjabi patriarch, forever flexing his ancestral property, and wanting his son Varun (Omkar Kapoor) to help out on their land. Varun, however, wants no part of this scheme, and flies off to Mauritius to join his friend Karan (Sunny Singh) in search of a job. Love finds him before work, though, and Varun is now married to Riya (Nimisha Mehta) in a whirlwind sequence of affairs. The only problem here is that Varun becomes the "ghar jamai" of the Mehta family by lying about not having a family, since Riya's father (Manoj Joshi) is wheelchair-bound and she does not wish to abandon her parents.

Complications arise when the old man gets on a flight to Mauritius with his brother-in-law (Rajesh Sharma) in tow, and ends up living next door to the Mehtas, who have no idea that he is Varun's father. Toss in Karan's older brother Tommy (Jimmy Sheirgill), whose blessing is necessary for Karan's marriage to his long-time girlfriend Sonam (Rucha Vaidya), and you have three different tragedies waiting to happen when one tiny lie gets caught.

Except, nothing really happens. Despite their obliviousness to how offensive they were, the '90s comedies worked because there was a sense of impending doom that propelled the actions of the lead characters. Also, these films depicted a straightlaced lead character using a lie as a last-ditch attempt to save their ass, as opposed to Jhootha Kahin Ka where the Varun actively feels like he is being malicious by leading Riya on. So with no real consequences to his dubious actions, the "hero" of the story ends up looking mean-spirited (and not in an intentional, black-comedy way).

Casual misogyny runs rampant - Manoj Joshi's character is constantly accusing his wife Ruchi (Lilette Dubey) of being promiscuous, even going so far as to suggest that she was interested in cavorting with her son-in-law. It is 2019, and men putting women down is apparently still an act of comedy for Jhootha Kahin Ka. Besides, both the young female actors are given nothing to work with, and might as well be just arm-candy for song-and-dance routines. A couple of unnecessary item songs complete this callousness.

The movie could still not be a total mess if the story or dialogue was up to scratch. Alas, the filmmakers are content to mash together every Bollywood comedy trope and hope it all sticks. Predictable twists, lukewarm moments of tension and a severe case of continuity issues leave little to no redeeming qualities for this mediocre film. The cinematography is also a let-down, with nothing that screams "Mauritius" in the camera-work - all we get are shots of two houses that could very well be seen in South Bombay. The editing is atrociously choppy - the jump cuts alone are headache-inducing.

Seven people helped compose the soundtrack for this movie, which is completely mind-boggling considering that there is not a single memorable song in the movie. The music is loud and obnoxious, and the songs randomly appear out of nowhere and disturb the shoddily-edited storyline further, and only serve to inflict pain on the collective eardrums of the audience.

Rishi Kapoor (bless him) makes a valiant effort to save the film - as does Jimmy Sheirgill, to a smaller extent. The few laughs Jhootha Kahin Ka can get out of you can all be attributed to these two. The rest of the supporting cast try - especially Lilette Dubey - but the script leaves them with no chance of redemption. Omkar Kapoor over-acts and over-expresses his way through this 133-minute affliction. Sunny Singh is more natural, which thankfully gives you one young actor who doesn't grate on your nerves. The two actresses, Nimisha Mehta and Rucha Vaidya (the latter, especially) are invisible for the most part, giving the romantic part of the "rom-com" some kind of existential crisis.

We genuinely doubt even hardcore fans of Rishi Kapoor will be able to sit through such drudgery, and wonder why Rishi Kapoor agreed to be associated with this farce in the first place. Was it to get a chance to perform his iconic Jaane Do Na song from his 1985 hit Saagar? We'll never know.

Only if you're super into masochism would this one perhaps be a recommendation.
Share. Save. Connect.
Tweet
JHOOTHA KAHIN KA SNAPSHOT 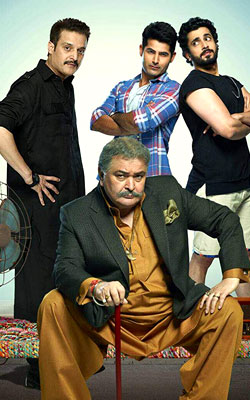 ADVERTISEMENT
This page was tagged for
jhootha kahin ka full movie
Jhootha Kahin Ka hindi movie
Jhootha Kahin Ka reviews
release date
Rishi Kapoor, Jimmy Sheirgill
Follow @fullhyderabad
Follow fullhyd.com on
About Hyderabad
The Hyderabad Community
Improve fullhyd.com
More
Our Other Local Guides
Our other sites
© Copyright 1999-2009 LRR Technologies (Hyderabad), Pvt Ltd. All rights reserved. fullhyd, fullhyderabad, Welcome To The Neighbourhood are trademarks of LRR Technologies (Hyderabad) Pvt Ltd. The textual, graphic, audio and audiovisual material in this site is protected by copyright law. You may not copy, distribute, or use this material except as necessary for your personal, non-commercial use. Any trademarks are the properties of their respective owners. More on Hyderabad, India. Jobs in Hyderabad.