One By Two Review 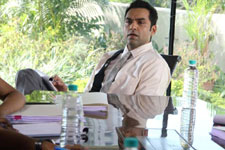 Swayamsrestha Kar / fullhyd.com
EDITOR RATING
3.5
Performances
Script
Music/Soundtrack
Visuals
3.0
4.0
3.0
5.0
Suggestions
Can watch again
No
Good for kids
No
Good for dates
No
Wait to rent it
Yes
One By Two is a terribly boring movie, and if you value your time, your money and your patience, you will stay away from it. There, that's our review.

Alright, alright, so we know that we must substantiate any opinion with pertinent evidence and reasoning. Otherwise, all of Aristotle's discourses on Rhetoric would be utterly pointless. In effect, this review is dedicated to Aristotle (and to us not being branded as smug Philistines).

Incidentally, Aristotle also had quite a lot to say about the art of drama and how spectacle forms an essential part of an effective performance. Let's face it - if we wanted to see exact depictions of everyday life, we'd all just be spying on our neighbours. There's a reason behind our need to indulge our sensibilities within the darkened interiors of cinema halls and theatres. We all need cinema to be simultaneously larger-than-life and incorporate elements of life into it. We want escape for a couple of hours, but with reminders and markers that let us know that we are not that far away from reality.

One By Two, on the other hand, is incredibly pedestrian. It is torturously slow, shoddily written, and even worse, it shows us that Abhay Deol, the nation's youth's favourite Devdas, is capable of being utterly uninteresting. Devika Bhagat, who had penned the surprisingly riveting script for Manorama Six Feet Under, tries to tell us a boy-girl story which does not have them singing around trees or skipping along snowy Alps, but even then, the elements of the tale feel somewhat stale. Yeah, we are rhyming now. That is how uninspiring this film is.

Amit Sharma (Abhay Deol) is a software engineer who gets dumped by his girlfriend. Samara (Preeti Desai) is a dancer who wants to be the "most famous dancer in the world" (honestly girl, get real, Govinda's still alive). Their stories run parallel, as characters from Amit's life make brief appearances in Samara's world and vice-versa. The two don't meet each other for the most part of the film, except for a chance encounter, and yet, one's actions affects the other.

Meanwhile, Amit wants to quit his fancy software job (with its fancy coffee breaks, and its posh glass facade), and Samara has to deal with an alcoholic mother (Lilette Dubey looking as lovely as ever). Amit wants to win his girlfriend back. Samara enters a reality dance contest. And yet, somehow, both their lives seem to be mirrors of each other - disappointment, loss, loneliness and melancholy are looped into the tapestries of their existence.

On paper, the film sounds great. But, that's also what they thought about the nuclear bomb. Some moments in the film were downright infuriating. Amit goes around with two friends who crack the corniest jokes and mouth the stupidest lines. Samara's dance moves mostly comprise of her throwing her (gorgeous, we've to admit) hair back and all around the place. Without any reason, Amit goes around MCing for his uncle's kavi sammelans, and those scenes are a whole different kind of excruciating.

Also, the protagonists don't really draw a lot of sympathy. They're both rich kids who seem to be pouting their way through life. There is no perceptible angst or any real depth to their apparent anguish. In the second half, we do get to know about the murkier parts of Samara's life, but by then, the film has descended into the unforgivable quagmire of soul-crushing ennui.

Technically though, the film is sound. The cinematography is sleek, and the frames have a glossy feel to them. Maybe, there was just a little too much gloss. And apart from Khushfemiyan, the soundtrack also doesn't churn out anything promising or enduring.

Abhay Deol looks bored and is called boring throughout the movie. He shows a little bit of spunk when he shocks a roomful of respectable people by bursting into Robert Plant-esque levels of yodelling in his chaddi-banyan, but that's about the only saving grace of his performance, and indeed of the entire film.

Preeti Desai is too busy looking pretty to actually act. The only other actress who can perceive this newbie as a plausible threat is Katrina Kaif, but the "plastic firang" angle has been exploited enough for comic relief, and so we will leave you to make your own jokes.

Special mention must be made of Lilette Dubey, who puts in a very sensible and sensitive performance as Samara's alcoholic mother Kalpana. She is elegant, even in sorrow, and poised, even in moments of mirthful abandon. The relationship between Samara and Kalpana has also been sketched out with some thought, but Desai's deadpan expression dampens the emotional intensity in all of these scenes.

All in all, One By Two is disappointing. Massively so.
Share. Save. Connect.
Tweet
ONE BY TWO SNAPSHOT 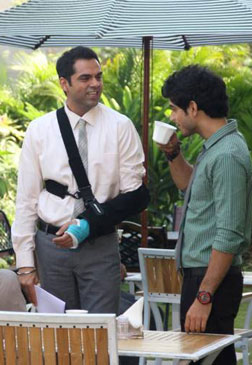 ADVERTISEMENT
This page was tagged for
One By Two hindi movie
One By Two reviews
release date
Abhay Deol, Preeti Desai
theatres list
Follow @fullhyderabad
Follow fullhyd.com on
About Hyderabad
The Hyderabad Community
Improve fullhyd.com
More
Our Other Local Guides
Our other sites
© Copyright 1999-2009 LRR Technologies (Hyderabad), Pvt Ltd. All rights reserved. fullhyd, fullhyderabad, Welcome To The Neighbourhood are trademarks of LRR Technologies (Hyderabad) Pvt Ltd. The textual, graphic, audio and audiovisual material in this site is protected by copyright law. You may not copy, distribute, or use this material except as necessary for your personal, non-commercial use. Any trademarks are the properties of their respective owners. More on Hyderabad, India. Jobs in Hyderabad.