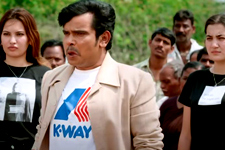 Aditya Devulapally / fullhyd.com
EDITOR RATING
1.0
Performances
Script
Music/Soundtrack
Visuals
3.0
1.0
2.0
3.0
Suggestions
Can watch again
No
Good for kids
No
Good for dates
No
Wait for OTT
No
Put the coffee in the oven and set for 5 min - nay, 10!

Download a pleasant classic (like a Groundhog Day or any Sekhar Kammula film) to act as a palette cleanser.

Yes! Now I am ready to write this review.

When I was assigned Sampoornesh Babu aka Sampoo's new outing, I knew what it was - a test. Will a young, snobbish writer be ready to relish spoof cinema? However, little do people know about those hostel corridors when my gems of roommates would remix the dialogue "Dabbu tho konadaniki vaadu shampoo kaadu Sampoo" for every punch-worthy occasion.

Dhaggad Samba (Sampoornesh Babu), a do-gooder with swagger, enters a bungalow as a tenant. How Samba and his sidekick PK (Mahaboob Basha) flirt with the landlord's daughters, face the ghost-ridden house and unravel a dark secret is the plot.

Let me make an understated but important rule of cinema: Films that fail in narrative conventions but succeed in impact are anything but failures. Irrespective of his audiences' sophistication, Sampoornesh Babu has rarely been unsuccessful with his films. Cringe cinema has a way of slipping into youngsters' conversations, their banter, their inside jokes, and ends up becoming a reason for otherwise lazy youngsters to go out, meet their friends and share a hearty laugh.

Indeed, if you think about it, Sampoo and Steven Shankar's collaborative efforts, Hrudaya Kaleyam and Kobbari Mata, have cult following akin to the massive reputation of Tommy Wiseau's The Room. Taking an already unbelievable scenario, stretching it to its illogical extremes, making it an assault on your senses, generating shock value and, therefore, laughter is supposed to be the nature of such films. Making films so bad they're good is an art, PERIOD.

However, this time Sampoo returns with no spoofs, no parodies, no cringe humour - just cringe, and not the memorable kind either. No joke is so bad that it's share-worthy. No gag becomes successful at failing miserably. No scene becomes classic spoof material. It's plain B-cinema with joyless storytelling. Add better production values, and this could have been a Balayya movie. Which is not a good sign for an intentional spoof film.

Indeed, just as you think the bottom of the barrel has been reached, the film shows you that things can be made even worse. The lengthy pre-climax bit with back-to-back flashbacks teaches you the art of shutting your eyes and taking it all in whenever life gets unbearable. On the flip side, though, the movie doesn't feel like an epic failure. Epic failures are those mainstream films which for no reason cost more than 400 bucks, promise entertainment, and unintentionally become spoof material. This one sticks to not killing you and not making you stronger.

There's not much to talk about performances. Sampoornesh Babu is in his usual element of non-sync dance moves, dubbing mishaps and abrupt dialogue cues. The Jabardasth comedy actors including Chalaki Chanti and Appa Rao do a decent job at delivering a few laughs.

Now for the crucial question of whether you should watch this one. With the right mindset and the right company, Dhaggad Samba can be a watchable affair - especially with friends who crack endless lame jokes and amplify the joy of a mindless film. Having said that, I will get back to my blazing hot coffee and classic rewatch to fight the pain in my senses. 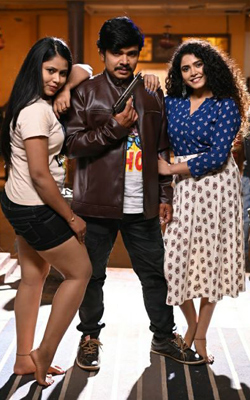 ADVERTISEMENT
This page was tagged for
Dhagad Saamba telugu movie
Dhagad Saamba reviews
release date
Sampoornesh Babu, Sonakshi Varma
theatres list
Follow @fullhyderabad
Follow fullhyd.com on
About Hyderabad
The Hyderabad Community
Improve fullhyd.com
More
Our Other Local Guides
Our other sites
© Copyright 1999-2009 LRR Technologies (Hyderabad), Pvt Ltd. All rights reserved. fullhyd, fullhyderabad, Welcome To The Neighbourhood are trademarks of LRR Technologies (Hyderabad) Pvt Ltd. The textual, graphic, audio and audiovisual material in this site is protected by copyright law. You may not copy, distribute, or use this material except as necessary for your personal, non-commercial use. Any trademarks are the properties of their respective owners. More on Hyderabad, India. Jobs in Hyderabad.