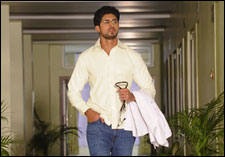 Deepa Garimella / fullhyd.com
EDITOR RATING
3.0
Performances
Script
Music/Soundtrack
Visuals
5.0
3.0
6.5
4.0
Suggestions
Can watch again
No
Good for kids
No
Good for dates
No
Wait to rent it
Yes
The makers of Rushi meant really well - oh, that is written all over this film. Only, they just didn't know how to go about it. For Rushi is a film too small for its ambition, a movie too callow for what is actually an inconvenient, bulky subject.

This is a slice-of-life film (or at least a shot at one), and it does get some things right - like its central premise, the life of medicos on campus, and some medical terminology here and there. What it surprisingly doesn't get right is the emotional quotient.

Rushi is a film that wants to talk about this medico-legal question that surfaces in the life of the MBBS student Rushi (Aravind Krishna). Rushi is a self-assured, cocky, frank person with an unwavering commitment to doing the right thing irrespective of rules. Revealing any more of the plot would be unfair to the film, even though you can smell the ending 3 miles away, but what eventually unfolds is a debate on a rather big question.

Unfortunately, the writing lacks the depth that a topic this complex and this delicate demands. First of all, there is a long romance between Rushi and his girlfriend Pooja (Supriya Sailaja) that the makers felt compelled to take us through, as though it were central to our understanding of the final ethical debate. The campus bits are a fairly true-to-life, though, and serve to build up the background pretty well.

When it finally reaches the actual moral issue in question, the film is utterly inept. Superficial writing, undercooked dialogues and wooden performances make this the kind of oversimplified absurdity that you would expect from a film like, well, this. The melodrama is timed rather badly, and delivered to little effect. Even the courtroom arguments and scenes are laughable. There's no sense of urgency to what is essentially a medical thriller. Also, we won't tell you which ones, but how the censor board passed some of the scenes is something we'd like to know.

This is not helped by an array of so many actors who are so flawed it is not a joke. While there are a few character actors, like Ranganath, who lend a bit of credibility to the extensive cast, most of the acting line-up is amateurish.

Aravind Krishna has the voice and the build, but is in danger of falling into the trap of sticking to poker-faced dialogue delivery that looks intense but is not. While this role needs just that out of him, he is also the only faintly compelling thing about the film.

The actors, in general, do not seem to have been under any sort of pressure to "perform" - everyone walks and talks utterly devoid of energy. The leading lady looks a little more expressive in the second half of the film than in the first, in which she's visibly suppressing a lot of grins, thrilled at starring in a Prasads production, no doubt.

Which brings us to how unbelievable it is that Rushi has such poor production values, given that it has such a powerful banner backing it. Many scenes were clearly shot in Prasads' own premises, the visuals are less appealing than a teleserial, and the actors don't seem energetic. Indeed, some more money - doled out to every department - would have done Rushi a world of good. However, the music, we must note, has been well-composed.

Rushi is a noble attempt, but it is a tragedy that there's little in there beyond the intention.
Share. Save. Connect.
Tweet
RUSHI SNAPSHOT

ADVERTISEMENT
This page was tagged for
Rushi telugu movie
Rushi reviews
release date
Aravind Krishna, Supriya Sailaja
theatres list
Follow @fullhyderabad
Follow fullhyd.com on
About Hyderabad
The Hyderabad Community
Improve fullhyd.com
More
Our Other Local Guides
Our other sites
© Copyright 1999-2009 LRR Technologies (Hyderabad), Pvt Ltd. All rights reserved. fullhyd, fullhyderabad, Welcome To The Neighbourhood are trademarks of LRR Technologies (Hyderabad) Pvt Ltd. The textual, graphic, audio and audiovisual material in this site is protected by copyright law. You may not copy, distribute, or use this material except as necessary for your personal, non-commercial use. Any trademarks are the properties of their respective owners. More on Hyderabad, India. Jobs in Hyderabad.