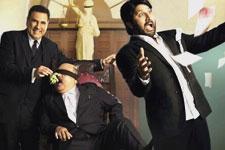 Nupur Barua / fullhyd.com
EDITOR RATING
6.0
Performances
Script
Music/Soundtrack
Visuals
7.0
6.0
4.0
7.0
Suggestions
Can watch again
Yes
Good for kids
No
Good for dates
Yes
Wait to rent it
No
What this country lacks, as far as movies are concerned, is a good body of courtroom dramas. Hindi movies (and, subsequently, television and regional movies) have made such a farce of how a trial is conducted that any film buff knows the following - (i) all lawyers and judges speak in pure Hindustani, (ii) a witness box is a waist-high cage, and (iii) all witnesses and undertrials swear on a holy book.

And then along comes the refreshing Jolly LLB, to shatter myths about how a session in a lower court is carried out. If you are expecting emotional scenes, abuses and heavy drama, or even comedy, inside the courtroom, this is not the movie for you.

Jagdish Tyagi, a.k.a. Jolly (Arshad Warsi), is a small-time lawyer in Meerut. He is not very successful, but when a prosecuting lawyer wins a case against Jolly, he makes up his mind to snap out of the monotony of routine and seek his fortune in New Delhi. (The man he defends in the above-mentioned case is a doctor who indulges his unqualified 14-year-old son and allows him to operate on a pregnant woman - this is based on a real case - to gain an entry into the Guinness Book of World Records).

Jolly finds himself in the same rut outside the court in Delhi as well. He misses his girlfriend Sandhya (Amrita Rao), a schoolteacher, but manages to make friends, and is supported by his lawyer brother-in-law (Manoj Pahwa). One of his most enduring relationships in the Capital is with Kaul (Ramesh Deo), who runs a tea stall near the court.

In the meantime, a hit-and-run case, in which the rich Rahul Dewan is accused of killing six pavement dwellers, is facing a lot of heat (this is also based on a recent, actual case). However, the Dewan lawyer, Rajpal (Boman Irani), manages to thwart all attempts by the media and others to convict Rahul.

Jolly manages to squeeze into this case with a PIL of his own, but soon realizes that there's more to this than meets the eye.

The story is simple, and the screenplay is tight enough to hold your attention. It lags somewhere in the middle, and the sudden songs do not help, but you will keep awake only because you believe in the underdog.

A lot of the dialogues are in English, so the movie may lose audiences who are not familiar with the language - that, then, does not solve the movie's purpose of becoming a beacon of hope for the common man who faces similar problems of police brutality and authoritarian behaviour. Besides that, the film is not a satire or a comedy (in case the promos had you fooled). It is a straightforward comment on today's judicial system.

On the other hand, it is the comedy in the dialogues (and not situations) that make this movie personal and relatable. The makers have incorporated plenty of emotion in the situations, though, and when Judge Tripathi (Saurabh Shukla) goes from being a grovelling idiot to a raving carrier of justice, you feel vindicated.

Jolly LLB is less about Jolly and more about the injustice that is so casually meted and doled out to all those who cannot afford to pay their lawyers in crores. It is also about the privileged class, who see nothing wrong in buying their way out of trouble.

The only problem with the film is the flow. The narration begins well, and all characters and situations are set up comfortably. However, when the story moves to the more complicated plot points, transitions become abrupt, and all the events are rushed through to get to the conclusion.

The production design is authentic and believable. Most of the movie is set around the courtroom, but even the place where Jolly resides in Delhi is typical without being over-realistic. The cinematography is effective, especially with the landscapes (whether it is the green fields of Uttar Pradesh, or the crowded roads in Delhi). Costume design is decent.

The movie belongs to the three actors who spar with one other in the court room - Arshad Warsi, Boman Irani, and Saurabh Shukla; or the pitiable small fry, the powerful big shot and the unintentional comedian. The three of them take the David Vs Goliath story to another level.

Some of the courtroom sequences are so bizarre that they can only be based on facts. Look out for the scene where the judge frantically tries to locate the gavel, without which he cannot bring order to the chaos rampant in the courtroom. Boman Irani is outstanding, as usual.

The supporting cast is commendable as well, and that includes a cameo by Sanjay Mishra. Manoj Pahwa is sincere, and Ramesh Deo is effective as the lonely old man with a recent tragic history. Amrita Rao tries too hard to be a small-town girl, and although she is the one who keeps Jolly grounded in ethics, she is not very convincing as Sandhya.

Jolly LLB is a must-watch for the thinking audience. It is a commercial movie, with plenty of masala, yet it is made along the lines of an independent flick. Fans of Arshad Warsi and Boman Irani will not be disappointed, but one should also watch the film because it raises some pertinent questions to the way we, as citizens of this country, conduct ourselves, and how much we accept or reject as norms of normal society.
Share. Save. Connect.
Tweet
JOLLY LLB SNAPSHOT 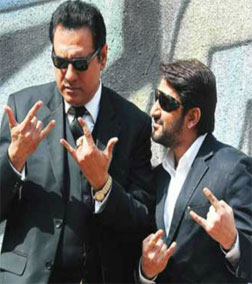 ADVERTISEMENT
This page was tagged for
Jolly LLB hindi movie
Jolly LLB reviews
release date
Arshad Warsi, Boman Irani
theatres list
Follow @fullhyderabad
Follow fullhyd.com on
About Hyderabad
The Hyderabad Community
Improve fullhyd.com
More
Our Other Local Guides
Our other sites
© Copyright 1999-2009 LRR Technologies (Hyderabad), Pvt Ltd. All rights reserved. fullhyd, fullhyderabad, Welcome To The Neighbourhood are trademarks of LRR Technologies (Hyderabad) Pvt Ltd. The textual, graphic, audio and audiovisual material in this site is protected by copyright law. You may not copy, distribute, or use this material except as necessary for your personal, non-commercial use. Any trademarks are the properties of their respective owners. More on Hyderabad, India. Jobs in Hyderabad.