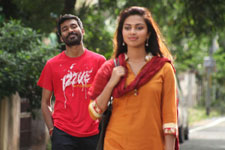 Ravi Kandala / fullhyd.com
EDITOR RATING
5.5
Performances
Script
Music/Soundtrack
Visuals
7.0
4.0
5.0
7.0
Suggestions
Can watch again
No
Good for kids
No
Good for dates
No
Wait to rent it
No
While some people appreciate cinema that portrays stark realities, others find it repugnant to have to go to a theatre and sit through the unpalatable truths that they witness every day anyway. Raghuvaran B.Tech is fortunately not totally there. While the hero is a loser hated at home and in general, reality is not portrayed in all its extreme ugliness. The loser here is shown to have a family that loves him but desists from showing it. And it freely descends into masala movie mode in the second half. Read, Telugu movie mode.

The film revolves around Raghuvaran (Dhanush), a civil engineer by education. Raghu is unwilling to join just any job that comes his way, and insists he will do only a job related to civil engineering, his domain of expertise. His stance is quite tough to defend given his brother is a software engineer by profession and is doing fairly well for himself.

Raghuvaran falls in love with his neighbor Shalini (Amala Paul). One fine day, while he is busy wooing Shalini, tragedy strikes at his house. The incident alienates him from his family. How Raghuvaran claws his way back into his family and redeems himself professionally forms the rest of the film.

Raghuvaran B.Tech does well as long as it remains in the realism zone. Dhanush's struggles with his father and mother, and his bike, are portrayed nicely. The fight where he beats up people when he finds out that his father is not home is very well shot. The first half, in general, keeps the audience in splits. It is when Dhanush moves out of the bad boy zone and starts wearing ties and glasses that the movie tends to lose track.

There are many challenges and obstacles shown in the second half, but the solutions for those are more strokes of luck than products of the hero's intelligence. Also, the spineless villain, who seems to have no answers once the hero comes back with a repartee, makes things uninteresting. The whole social media angle also gets tiresome.

Performances-wise, the film rests on Dhanush's shoulders. Right from the swagger he dons when he does something right to the pain he portrays during the family tragedy, he just nails the act. His screen presence is immense, and whoever has dubbed for him has done a fantastic job. Amala Paul, Saranya, the spineless Fair & Lovely-faced villain, and all others are incidental, and they only help portray Dhanush in an even better light. Vivek enters in the second half and brings in quite a few laughs.

The technical values are all fine. The music by Anirudh Ravichander suits the movie. The background score is loud at places and rousing at some others.

Dubbed films have a flavor of their own - one that some people enjoy while others don't. Raghuvaran B.Tech is a decent change from the Telugu masala potboilers we've been subjected to forever. If you don't mind slight excesses, go for it.
Share. Save. Connect.
Tweet
RAGHUVARAN B.TECH SNAPSHOT 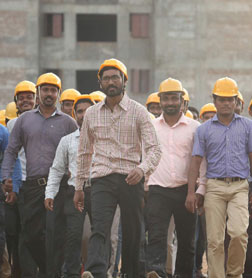 ADVERTISEMENT
This page was tagged for
Raghuvaran BTech telugu movie 400mb
raghuvaran b tech telugu movie download in movierulz
raghuvaran btech telugu jio rockers
raghuvaran b tech telugu full movie download jio rockers
raghuvaran BTech movie in telugu download movierulz
Follow @fullhyderabad
Follow fullhyd.com on
About Hyderabad
The Hyderabad Community
Improve fullhyd.com
More
Our Other Local Guides
Our other sites
© Copyright 1999-2009 LRR Technologies (Hyderabad), Pvt Ltd. All rights reserved. fullhyd, fullhyderabad, Welcome To The Neighbourhood are trademarks of LRR Technologies (Hyderabad) Pvt Ltd. The textual, graphic, audio and audiovisual material in this site is protected by copyright law. You may not copy, distribute, or use this material except as necessary for your personal, non-commercial use. Any trademarks are the properties of their respective owners. More on Hyderabad, India. Jobs in Hyderabad.