Okatonumberkurradu: hi! it's me Tarakaratna, grandson of ntr, s/o ramakrishna, nephew of balakrishna, cousin of...

Okatonumberkurradu: i am the latest 'nandamuri yuva kishoram' to ntr... sorry, to 'enter' Tollywood

Okatonumberkurradu: did i tell you NTR is my grand dad and...

Okatonumberkurradu: yeah, like my Grand Dad, i 2 am great man

Okatonumberkurradu: thanx! that was the name of my debut movie that was released three months ago. remem-ber those tremendous scenes with ntr garu's statue in the background? 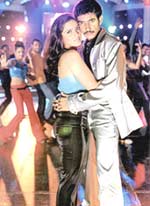 Okatonumberkurradu: i've proved 2 the world that looks, talent and luck don't matter. where there is a will there is a way. i got a few lakhs from my tatagaru's will and asked dad to invest in Yuvaratna

Helplessreviewer: will you get it back?

Okatonumberkurradu: depends on whether the audience will or won't accept me. i've tried using ntr garu's name and balakrishna uncle's voice in Yuvaratna. let's see

Helplessreviewer: hmm, if only the viewers too thought like you. i am watching your latest movie. i think it sucks Okatonumberkurradu: gee thanx, i know it will be a sucksess. i think i should plan my next movie now 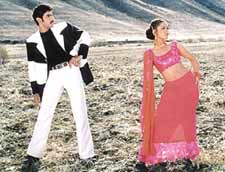 Sannajaji Poova... The song played at the end of movie wakes me up from my chat room dream. Strange that like in my dream, I hear only about Tarakaratna's lineage in the movie too. Words like 'maa vamsam', 'maa tatagaru' etc being bandied about left-right is a bit too much to handle. From the audio release to the posters, the film relied heavily on the Nandamuri hype, but nothing works. All hype and no dope make Yuvaratna a dull boy.

The film rambles throughout without making a point anywhere. It focuses on establishing Tarakaratna as one helluva cool dude. But he neither has the looks nor the talent to make up for his looks. He tries hard to capitalize on his first name. Hey dude, remember what the Bard of Avon said? What's in a name?

Ratna (Tarakaratna) is your regular Tollywood hero - smooth talking, bike-riding collegian who is every girl's dream knight. He is also a pathological braggart, and in one such session, he brags about his sexual escapades with Sandhya (Jivida), his classmate, to the rest of his friends. The entire first half is devoted to his antics.

These lies hinder Sandhya's arranged wedding, and the rest of the movie is about Ratna paying for his folly. He even offers to marry her to do justice, but the girl rejects him and gives him a mouthful. The second half is about Ratna trying to atone his sins. Of course, later Sandhya realizes that Ratna is a nice guy who secretly helped her in various instances and agrees to marry him. 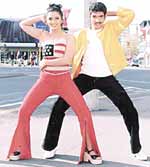 Jivida too is one of those assembly-line heroines for Tollywood. Good looks and good songs but nothing else. Keeravani's mark is evident in the eminently catchy Sannajaji song and a couple of others. Incidentally, RP too has sung and directed one song.

ADVERTISEMENT
This page was tagged for
yuvaratna review
yuvaratna movie download
yuvaratna telagu film review
yuvaratna MOVIE RATING
YUVARATNA MOVIE REVIEW
Follow @fullhyderabad
Follow fullhyd.com on
About Hyderabad
The Hyderabad Community
Improve fullhyd.com
More
Our Other Local Guides
Our other sites
© Copyright 1999-2009 LRR Technologies (Hyderabad), Pvt Ltd. All rights reserved. fullhyd, fullhyderabad, Welcome To The Neighbourhood are trademarks of LRR Technologies (Hyderabad) Pvt Ltd. The textual, graphic, audio and audiovisual material in this site is protected by copyright law. You may not copy, distribute, or use this material except as necessary for your personal, non-commercial use. Any trademarks are the properties of their respective owners. More on Hyderabad, India. Jobs in Hyderabad.