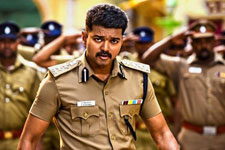 Ravi Kandala / fullhyd.com
EDITOR RATING
5.0
Performances
Script
Music/Soundtrack
Visuals
5.0
4.0
4.0
7.0
Suggestions
Can watch again
No
Good for kids
No
Good for dates
No
Wait to rent it
No
Amy Jackson clearly had no mirrors on the sets of Police. Why else would she subject herself to that wig? Our "Angry Young Man" Rajasekhar would have looked amazing in it, but Jackson? Also, she really shouldn't be lip-syncing to Telugu, Tamil or Malayalam. All she does is pout-unpout-pout-unpout-pout-unpout and then cross hands and pout - and we are supposed to believe that she's just lip-synced to the dialogue.

Samantha next. This writer came back home and watched some parts of Ye Maya Chesave to remember what Samantha actually looked like. Version 2.0 of Samantha - aka bee-stung lips, high cheekbones, experimental hairdo and fake smile - sucks.

The heroines out of the equation, let's come to Vijay. Ilayathalapathi Vijay, as the man is popularly known in the neighbouring State, commands a huge fan following there, and has trademark mannerisms that his fans obviously enjoy. But expecting them to be understood here is a bit like expecting the Bollywood audiences to cheer when Pawan Kalyan rubs his neck that way.

So is Police an unmitigated disaster? Nope. The film is yet another rehash of the Basha template - a guy living in a small and languid town, and staying away from violence and appearing extremely meek, suddenly gets into superhero mode, and explains it all with a flashback where he was a dashing cop (for a change, the hero is on the right side of law this time), and had a powerful villain destroy all that he held dear. And now the villain re-enters his life and there's a slam-bang climax. Yes, Police has all the Basha masala. And some of it works really well.

The interval denouement, for example. The audience is treated to a dose of repulsive brutality, and is rooting for the wrongdoers to be punished. Vijay has a constable express what he would do to the criminal if he could catch him - and then reveals what he has himself done. The constable represents the audience, and when the audience see their wishes fulfilled on screen, they go berserk. That one masala moment redeems the entire first hand single-handedly. And the second half has a few such fulfilling moments, too.

What constantly pulls Police down, however, is its larger-than-life portrayal of its hero. Vijay as a police officer is not just that, he is a messiah. Every case he picks up - children being forced to beg on the street, a woman raped brutally, corruption in the police department - is played to gallery with sentimental scenes galore, and ultimately ends in him emerging the savior of the downtrodden. If this man has political ambitions, he isn't hiding them. Even when he makes a comeback from his exile, he does not just return - he is portrayed as a man risen from the dead and as another avatar. This industrial-strength grandiloquence not only results in the film being stretched to 168 minutes, it kills the joy you derive from the moments that work well.

We couldn't understand the songs - either the voices, or the lyrics, or the music - but the overall effect was certainly raucous. The action however is decent, the film is shot stylishly, and the locales are beautiful.

One thing that escapes us is how this movie escaped with a U rating. It has scenes where a villain turns on the tap in a tub with a baby in it, a doctor describes how a woman was raped in detail, and at least three instances where Vijay kills people and hangs them upside down.

Police reveals its cards too soon and appears like a normal-length movie, but then stretches on interminably. Some of the thrills are good, but whether you would watch an entire movie for that is up to you. The only silver lining for us was discovering that Devi 70mm still has one of the best audio systems in town.
Share. Save. Connect.
Tweet
POLICE SNAPSHOT 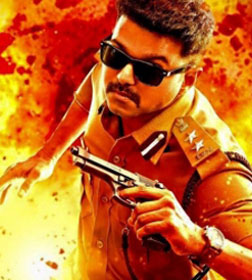 See Police full details
TOP COMMENT
The Common Movie Goer on 16th Apr 2016, 7:30pm | Permalink
I used to watch a ton of movies as a kid at Devi 70mm before the multiplexes came along. I have never seen a hit movie at Devi, ever. For some reason, Devi always seems to be screening movies that are destined to fail at the box office. The only movie I remember that actually escaped the fate was Happy Days.

It was as if Sudarshan was drawing all the positive energy away from Devi and releasing hit after hit. So much so that some heroes like Mahesh refused to release their movies if Sudarshan wasn't available. Only Nag managed to score hits at Devi. Some of the gems that I saw in Devi include Neti Gandhi and Abhay, movies that definitely scarred me for life.

Why are fullhyd reviewers going to Devi anyway? People don't let you hear half the dialogues anyway on the first day. I am sure the Ilaythalapathy has at least some crazed fans over here.
7
1
POLICE USER REVIEWS
1 - 5 OF 5 COMMENTS
POSITIVE  |  NEGATIVE |  NEWEST  |  OLDEST  |  MOST HELPFUL  |  LEAST HELPFUL
Kanye on 17th Apr 2016, 3:17am | Permalink
I liked this review. Or at least I tried to. That unnecessary (and quite rude) remark on Samantha and no mention of Baby Nainika (Meena's daughter) kind of spoiled it for me.
Kim on 17th Apr 2016, 11:28pm | Permalink
It really had to be said, in my opinion. She looked her best in Ye Maya Chesave and Brindavanam, and it's really unfortunate that she was convinced that plastic surgery or overdone makeup or whatever it is is the correct look for her.
Kanye West on 17th Apr 2016, 3:20am | Permalink
My point is that reviews should talk about the acting of an artist. Not his/her own looks.
Very funny how there is no mention of Samantha's acting... I found it quite nicely handled.
Swaroop Thotada on 21st Apr 2016, 9:09pm | Permalink
I think its okay to talk about appearances, especially when reviewing Indian films. Because so much focus is put into looking good, and their "good looks" are kind of rubbed in our faces through flattering way of dressing, even when the situation is inappropriate and also sometimes we are subjected to dialogues that stress the good looks of stars. I think by considering looks as not important, we are buying into a hypocrisy. We still have a long way to go in making films where looks do not matter. When the actors' good looks are complimented, why is it not okay to state otherwise when that is the case? Just my point of view, not an argument :)
The Common Movie Goer on 16th Apr 2016, 7:30pm | Permalink
I used to watch a ton of movies as a kid at Devi 70mm before the multiplexes came along. I have never seen a hit movie at Devi, ever. For some reason, Devi always seems to be screening movies that are destined to fail at the box office. The only movie I remember that actually escaped the fate was Happy Days.

It was as if Sudarshan was drawing all the positive energy away from Devi and releasing hit after hit. So much so that some heroes like Mahesh refused to release their movies if Sudarshan wasn't available. Only Nag managed to score hits at Devi. Some of the gems that I saw in Devi include Neti Gandhi and Abhay, movies that definitely scarred me for life.

ADVERTISEMENT
This page was tagged for
Police telugu movie
Police reviews
release date
Vijay, Samantha
theatres list
Follow @fullhyderabad
Follow fullhyd.com on
About Hyderabad
The Hyderabad Community
Improve fullhyd.com
More
Our Other Local Guides
Our other sites
© Copyright 1999-2009 LRR Technologies (Hyderabad), Pvt Ltd. All rights reserved. fullhyd, fullhyderabad, Welcome To The Neighbourhood are trademarks of LRR Technologies (Hyderabad) Pvt Ltd. The textual, graphic, audio and audiovisual material in this site is protected by copyright law. You may not copy, distribute, or use this material except as necessary for your personal, non-commercial use. Any trademarks are the properties of their respective owners. More on Hyderabad, India. Jobs in Hyderabad.