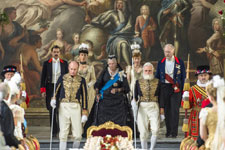 T J Reddy / fullhyd.com
EDITOR RATING
5.0
Performances
Script
Music/Soundtrack
Visuals
7.0
4.0
4.0
5.0
Suggestions
Can watch again
No
Good for kids
Yes
Good for dates
No
Wait to rent it
Yes
A week or two ago, I made an off-handed joke in one of my reviews about how Bollywood was obsessed with Dawood Ibrahim and how their Hollywood counterparts were enamoured with the life and times of Pablo Escobar and his cohorts. Little did I realise that for years and years, jolly old England has been quietly making films about its many monarchs and politicians. While the most intriguing political drama to come out of England is the first episode of season 1 of Black Mirror, Dames Judi Dench and Helen Mirren, and also the occasional Meryl Streep have portrayed British aristocracy to an alarmingly high degree.

Director Stephen Frears' latest project Victoria And Abdul joins this illustrious company of mostly stage-plays masquerading as movies by chronicling the final years of Queen Victoria's life and her friendship with an Indian man who is summoned to hand over a Mughal coin and who in turn becomes a royal servant who then gets promoted to spiritual advisor, Abdul.

While this movie can easily be viewed as an extension of Downton Abbey with its depiction of aristocracies and the men and women who keep the aristocrats ticking, I for one found the film's narrative to match that of a romantic comedy. We have a happy-go-lucky guy who comes in as the ray of sunshine in the life of a woman who is feared by all while being lonely at the top. He shows her that life still has a great amount of beauty in it and that she has a lot of positivity hidden in her to close out the second act. For the third act we have a misunderstanding that leads to separation, and this eventually leads to their bond becoming more pronounced.

What differentiates Victoria And Abdul from your run-of-the-mill rom-com is the wealth of unapologetically British actors (and a fish-out-of-water Ali Fazal) in its cast. Almost every single actor is one you've seen in the franchise that enriched your childhood with morals, Harry Potter, and the franchise that showed those morals the finger in your youth and adulthood, Game Of Thrones. The acting department is not the one that is woefully short of quality here.

What are at fault are the film's screenplay and the characterization of Abdul. Writers are often advised to write about what they know as it helps them etch characters better while drawing from personal experience and knowledge. Tyneside writer Lee Hall knows British customs and melds them with dry wit, but his script is inept at making a man coming from a country his countrymen once ruled interesting or engaging. Abdul is unwaveringly loyal and dutiful. Lost under his sparkling smile and pleasant presence is every layer of plot and character written for him. Mentions of his gonorrhoea, undisclosed wives and unidentified lineages are swept under the rug as Abdul rarely shows any other emotion except happiness as if it were his default setting.

While Ali Fazal's and his co-stars' charms are on full display, their considerable talents are wasted on characters that are archetypes more than three-dimensional human beings. Judi Dench reprises her role as Queen Victoria in this spiritual sequel to Mrs Brown. She carries the film on her regal shoulders as she portrays a woman who has been subject to years of pain and heartache. Aspects that filled her life with joy are all long gone as she withers away on her lonely throne. Her need to make a connection with a solitary soul who is in no way angling for a position in the monarchy is made tangible to the audience through The Dame's majestic performance.

This movie needs Dame Judi Dench like Queen Victoria needs Abdul's company, as its score and cinematography are as bland and one note as its supporting cast. Thomas Newman is at his best when working on Pixar, and the lack of that jumping table lamp in the opening studio credits is quite the precursor to the dip in quality in the sound department. The cinematography on the film does the usual shtick of capturing the vast landscapes and grand ballrooms of Great Britain, but rarely does it ever endeavour to stand out from the crowd of similar movies the English produce.

Like the multitude of man-and maid-servants who serve The Queen with immaculate precision, the film is in service of its lead actress. It is she who carries the story, and every other filmmaking aspect serves her considerable talents without ever upstaging her.

A prominent joke of the film is one where The Queen orders a mango to be sailed in from India after hearing Abdul sing its praises. While The Queen and her subordinates are adequately impressed by looking at a mango, I for one sat in my seat stone-faced and unimpressed.

Like 1989's Driving Miss Daisy, this film is a saccharine representation of an interaction between two people who occupy varying ends of society. At risk of sounding racist, the movie is one that most people unaccustomed to the Indian way of life will enjoy as to them it is a window into a world (British-ruled India) they seldom make an effort at truly understanding. But to most people inhabiting this country, stories good and bad about the British Raj are ones we have seen and heard before, and with little to no character or grit written for the Indian representative of the cast, the film might prove to be a tough pill to swallow.
Share. Save. Connect.
Tweet
VICTORIA AND ABDUL SNAPSHOT 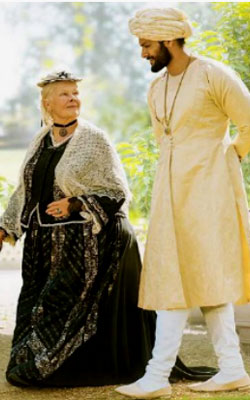 ADVERTISEMENT
This page was tagged for
Victoria And Abdul english movie
Victoria And Abdul reviews
release date
Judi Dench, Ali Fazal
theatres list
Follow @fullhyderabad
Follow fullhyd.com on
About Hyderabad
The Hyderabad Community
Improve fullhyd.com
More
Our Other Local Guides
Our other sites
© Copyright 1999-2009 LRR Technologies (Hyderabad), Pvt Ltd. All rights reserved. fullhyd, fullhyderabad, Welcome To The Neighbourhood are trademarks of LRR Technologies (Hyderabad) Pvt Ltd. The textual, graphic, audio and audiovisual material in this site is protected by copyright law. You may not copy, distribute, or use this material except as necessary for your personal, non-commercial use. Any trademarks are the properties of their respective owners. More on Hyderabad, India. Jobs in Hyderabad.