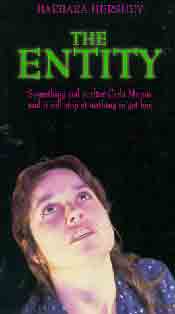 Ajay Bhashyam / fullhyd.com
EDITOR RATING
7.0
Performances
Script
Music/Soundtrack
Visuals
NA
NA
NA
NA
Suggestions
Can watch again
NA
Good for kids
NA
Good for dates
NA
Wait to rent it
NA
Carla Moran is a mother of three. Life is fine till one night she gets raped in her bedroom (?) by a guy she can't see. After the act, he just 'vanishes'. She refuses to go to a doctor even after her friend advises her. Then, the next day, the car she's driving starts driving itself and nearly kills her. Now, she decides to go see Dr. Steidman.

He takes some tests and sends her home. She goes to have a bath and gets raped again. This time she is bruised very badly, and she tells the doctor that she felt there were 3 unseen 'entities' this time. He probes her psyche, asking her questions about her childhood etc. She tells him that her father used to hold her in a 'bad' way, she ran away, got pregnant at 16... the works. Anyway, that night she's raped yet again, and this time in front of her kids. She's questioned by a panel of experts, who think she's suffering from mass delusion.

That night, the 'entity' makes love to her while she's asleep and she actually enjoys it! The doctor tells her that this entity is a figment of her imagination, created to represent people or things, and to probably release some pent up frustrations. She gets angry with the doctor for suggesting that, and she decides to cooperate with the 'entity'!

That day, she meets 2 parapsychology students from the university, who are very interested in her story. They come to her house, and photograph some amazing phenomena like electrical discharges etc. Then they come up with a lot of psychology and paranormal theories, and conclude that it is probably a poltergeist - a 'naughty' ghost. They create a setup for her to live in, so that they can isolate the 'entity'. The climax is very good, and I won't spoil it for you!

There is one point you might not understand - during the starting credits you are told that the story is based on the book by Frank DeFelitta, and at the end of the movie you are told that this is a fictionalized version of a real story that took place in October, 1976 in California. Either way, the movie is quite good.

For the voyeurs, Barbara Hershey's character gets raped at very regular intervals, and there is more than enough flesh shown. Although this isn't an edge-of-the-seat thriller, it does sustain your interest till the end. The special effects are not too bad either. A very good movie if you've got the time to spare.
Share. Save. Connect.
Tweet
THE ENTITY SNAPSHOT

ADVERTISEMENT
This page was tagged for
entity english movie
The Entity english movie
The Entity reviews
release date
Barbara Hershey, Ron Silver
Follow @fullhyderabad
Follow fullhyd.com on
About Hyderabad
The Hyderabad Community
Improve fullhyd.com
More
Our Other Local Guides
Our other sites
© Copyright 1999-2009 LRR Technologies (Hyderabad), Pvt Ltd. All rights reserved. fullhyd, fullhyderabad, Welcome To The Neighbourhood are trademarks of LRR Technologies (Hyderabad) Pvt Ltd. The textual, graphic, audio and audiovisual material in this site is protected by copyright law. You may not copy, distribute, or use this material except as necessary for your personal, non-commercial use. Any trademarks are the properties of their respective owners. More on Hyderabad, India. Jobs in Hyderabad.