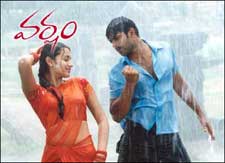 Mithun Verma / fullhyd.com
EDITOR RATING
7.0
Performances
Script
Music/Soundtrack
Visuals
NA
NA
NA
NA
Suggestions
Can watch again
NA
Good for kids
NA
Good for dates
NA
Wait to rent it
NA
When one thinks of cinema, one thinks of glamourous heroines, perhaps even of handsome heroes (har!) or maybe even rain songs, but no one, absolutely no one, thinks of screenplay. A screenplay (pronounced as SCREEN-PLAY) sounds like a computer game which is played on one of those Playstations, but isn't.

A screenplay is a traditional movie ingredient, just like glycerine and navel, but used sparingly over the years. Varsham employs this rare ingredient to an alarming level, and comes out alive and kicking.

Shaila (Trisha, still recovering from a natural disaster called Nee Manasu Naaku Telusu) does her bit of running around the trees as a red-hot heroine. Her career is soaring to dizzy heights (in the movie, i. e.), making her leech-master dad (Prakash Raj, still recovering from a natural disaster called Sivamani) really proud. She's practically everywhere - in the papers, on the magazine covers, on TV, on your Christmas wish list.

So, when the baddie (Gopichand, still recovering from a natural disaster called Nijam) discovers her on the cover of a mag, he decides it's time to bring in the hero. He abducts her, and for the rescue, has to come the stone-drilling, high-swinging hunk, Venkat.

Venkat (Prabhas, still recovering from a natural disaster called Raghavendra) enters the screen amongst big bangs. He's approached by Prakash Raj to save his daughter from the baddie. He agrees - not for the heroine, but for the money that he's being offered. As Venkat, riding lazily on his Eliminator, halts at a shack for light, it rains, washing all the memories afresh.

It had rained the first time that Venkat saw Shaila (that brilliant song in the railway station). From that day forth, the rain gods seem bored and desperate to see some hot romance between the two. So these guys don't disappoint the gods, and act to please.

But then the heroine is also desired by the baddie. With the help of Prakash Raj, he creates a rift between the wet-birds. Cut back to present, when Venkat has to rescue her from the baddie. And they fall in love all over again during the entire rescue mission.

As a story, this one is as new as the Solar System. But it's the presentation that delivers a KO punch. Every scene is a visual spectacle. The art direction is razor sharp, balancing the movie on its fine edges. All the stunts are richly choreographed and awesomely filmed. The camera work remains slick throughout, and the scenes are perfectly accentuated by an outstanding background score.

Prabhas has matured greatly since his first film. Wish his acting skills also matured alongside. He needs massive improvement in his dialogue delivery. Trisha, as the helpless heroine, has shown why Tamil Nadu is busy building her a temple. She looks so fresh and fine, you feel like gifting her to the roses. But the movie is bullied by Prakash Raj. With the fake canine tooth, his character as the sleazy hairball father is an absolute gem. After a long time, he has actually shown why he's won a national award.

Basically, a movie's main intent is to provide ample entertainment to your eyes and your ears. Why bring in party-pooper organs like the brain in between? Let the eyes and ears have their fun. That's exactly what Varsham does.
Share. Save. Connect.
Tweet
VARSHAM SNAPSHOT

ADVERTISEMENT
This page was tagged for
varsham movie review
varsham image
Varsham
varsham review
varsham telugu full movie
Follow @fullhyderabad
Follow fullhyd.com on
About Hyderabad
The Hyderabad Community
Improve fullhyd.com
More
Our Other Local Guides
Our other sites
© Copyright 1999-2009 LRR Technologies (Hyderabad), Pvt Ltd. All rights reserved. fullhyd, fullhyderabad, Welcome To The Neighbourhood are trademarks of LRR Technologies (Hyderabad) Pvt Ltd. The textual, graphic, audio and audiovisual material in this site is protected by copyright law. You may not copy, distribute, or use this material except as necessary for your personal, non-commercial use. Any trademarks are the properties of their respective owners. More on Hyderabad, India. Jobs in Hyderabad.