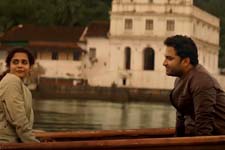 Sai Tulasi Neppali / fullhyd.com
EDITOR RATING
7.0
Performances
Script
Music/Soundtrack
Visuals
7.5
6.5
7.5
7.5
Suggestions
Can watch again
No
Good for kids
No
Good for dates
Yes
Wait for OTT
Yes
In any long-term relationship, there comes a moment of uncertainty and regret between partners. Maybe it happens during an explosive fight when hurtful words are uttered, or maybe it happens there is an unexpected attraction for a stranger. There are so many "what ifs" and "if onlys" that haunt a marriage. "What if I had chosen my school crush instead? What if I had stayed single? What if I had pursued my risky dream?"

In Ori Devuda, the protagonist Arjun gets a chance to turn his "what ifs" into reality. To tread down an untravelled road and see if the grass is really greener on the other side.

Written and directed by Ashwath Marimuthu, Ori Devuda is a Telugu remake of Ashwanth's Tamil hit Oh My Kadavule. A movie about second chances and fulfilled fantasies.

Arjun (Viswak Sen) is an immature, jobless, happy-go-lucky guy who is content with chilling with his childhood besties Anu (Mithila Palkar) and Mani (Venkatesh Kakumanu) at their favorite local pub. On one such drunken night out, a pensive Anu matter-of-factly asks Arjun to marry her. Being a mature and practical girl, Anu feels that rather than marrying strangers, they'd be better off together. Arjun laughs off the idea at first but realizes he has no good reason to say no, and so he agrees and they marry.

Cut to a year later, Arjun and Anu are at a family court, seeking a divorce. The crux of their conflict: Arjun's boredom with his new life. Everything's come so easy for him. His generous father-in-law Paulraj (Murali Sharma) gifts the couple a lavish flat and offers him a job in his company. Arjun's days are now just a long grind with the same woman who is his best friend, wife and colleague. Working a job where he tests commodes, he feels like his life is quite literally in the toilet.

Then when Arjun bumps into his school crush Meera (Asha Bhat), an exciting, free-spirited girl, he feels alive once again. That pesky "what if" bug sinks its teeth into Arjun's psyche, and he carelessly asks Anu for a divorce so he can pursue Meera.

But "God" has other plans. Hours before the divorce hearing, Arjun meets a mysterious figure who hands him a golden ticket to restart his love life. So off Arjun goes - back into his past - on a journey of rediscovery.

Even with elements of fantasy, like "God" characters (played by a gleefully mischievous Venkatesh and the ever-pitch-perfect Rahul Ramakrishna), Ori Devuda is a realistic look at marital issues. There are no obvious villains to fight. In fact, this very lack of obstacles is the reason for Arjun's ennui. He feels no thrill in marrying his chaddi-buddy - a petite curly-haired girl whom he still teasingly calls by her pet name "potti noodles" even in bed. Like most real-life marriages, Arjun and Anu's conflict is entirely internal and psychological: their absence of sexual chemistry, Anu's jealousy and possessiveness, Arjun's wandering eye, and ultimately their complete breakdown of communication.

The movie's glimpse into modern-day romances - in this age of endless choice and freedom - feels honest and mature. Still, that doesn't stop Ashwath from telling his story at a very self-indulgent pace. There are several filmi scenes that derive from other romcoms - teary farewells and passionate kisses; bike trips and rainy goodbyes. There is even that quintessential rom-com staple: a wedding-altar drama. And not to forget, a best friend character (Mani played by the fast-talking Venkatesh Kakumanu), who jokes and gives advice to our Romeo, but is of no real consequence to the hero's journey.

Despite these tropes, Ori Devuda remains an engaging experience. Save for a jarring cameo by Puri Jagannadh, the story is tightly written and satisfyingly concluded. It doesn't go off on tangents with Venkatesh's God character, for he is merely a plot device used to give Arjun a second chance at his life.

Vishwak Sen breathes life into Arjun's complex emotions as his character blossoms into a mature man. He is fully present in every scene, unlike Mithila Palkar who plays Anu with noticeable discomfort. Except in one impactful scene that happens inside an elevator, with Anu and Arjun seething at each other, Mithila Palkar looks aloof and distant, as if she were having an out-of-body experience. Especially compared to Asha Bhatt, who plays Arjun's crush Meera, with such a sizzling, yet dignified, presence.

Although Ori Devuda is unabashedly corny at times, it has a strong point of view and asks several pertinent questions about the nature of human relationships. And if you place yourself in Arjun's shoes, and go over your past failings, there is no telling what "aha!" moments of your own you might leave the theatre with.
Share. Save. Connect.
Tweet
ORI DEVUDA SNAPSHOT 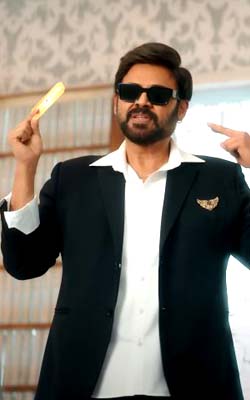 ADVERTISEMENT
This page was tagged for
Ori Devuda telugu movie
Ori Devuda reviews
release date
Vishwak Sen, Mithila Palkar
theatres list
Follow @fullhyderabad
Follow fullhyd.com on
About Hyderabad
The Hyderabad Community
Improve fullhyd.com
More
Our Other Local Guides
Our other sites
© Copyright 1999-2009 LRR Technologies (Hyderabad), Pvt Ltd. All rights reserved. fullhyd, fullhyderabad, Welcome To The Neighbourhood are trademarks of LRR Technologies (Hyderabad) Pvt Ltd. The textual, graphic, audio and audiovisual material in this site is protected by copyright law. You may not copy, distribute, or use this material except as necessary for your personal, non-commercial use. Any trademarks are the properties of their respective owners. More on Hyderabad, India. Jobs in Hyderabad.