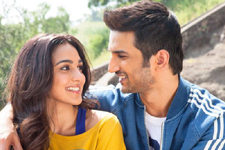 Swaroop Thotada / fullhyd.com
EDITOR RATING
7.0
Performances
Script
Music/Soundtrack
Visuals
8.0
6.0
6.0
7.5
Suggestions
Can watch again
No
Good for kids
Yes
Good for dates
Yes
Wait for OTT
No
M S Dhoni: The Untold Story, fierce in its belief that Dhoni is the near-flawless hero it depicts him as, delivers his inspirational rise from rags to riches with aplomb. When a film's title has "untold story" in it, we expect to get a peek into things that happened behind the front. But all we get is a near hagiographical take, preferring reverence to inquest or scrutiny as the film's method of exploration of its subject's life.

The film opens with aerial shots of the Wankhede Stadium reverberating with the ecstatic fans' chanting of "Dhoni, Dhoni" and cuts to the dressing room where Dhoni (Sushant Singh Rajput) plays a master strategist and decides to go next to bat, deviating from the original plan. The camera follows him to the stadium where he makes a heroic slowmo entry to fetch the team back from the claws of the imminent failure.

A brilliant opening scene indeed. But having already seen that nail-bitingly pulsating match, we buy into the film's teasing that it will get to the back-stories, as it flashes back to its hero's birth. But it doesn't.

Instead the film progresses more as a highlights showreel of Dhoni's life that we are already familiar with. But this is not a boring affair at all, at least till he makes it to the national team. We get to see Dhoni's childhood in Ranchi where he catches the eyes of his school coach (Rajesh Sharma), who needs a wicket-keeper. Initially not a big fan of cricket, the lad later warms up to the game, and eventually it becomes his greatest passion.

The film religiously documents all the people in Dhoni's life who played a role in his ascent. His faithful friends, his coach, his initially reluctant father (Anupam Kher), his sister (Bhumika Chawla) and the Ranchi locals who throng to the grounds whenever he plays and maniacally cheer his every shot.

Apparently there are no villains in Dhoni's life, save for the occasional ill-luck that seemingly is powerless before his optimism. Or they got brushed aside by the screenplay to make room for the homage it pays to the ardent supporters, evidently abundant. But the film's shyness towards conflict robs it of some credibility, and the narration appears staged and even doctored. A reference is made to his alleged rivalry with Sehwag, but that's only to check the box. The scenes featuring Yuvraj Singh (Herry Tangri) throw no light on anything interesting.

The dull shadow cast by the political correctness of the story haunts the narration throughout. There are no character study, big revelations or alternate perspectives offered on the controversies. Nothing much is left except the cherry-picked events from its subject's life, after the film dodges all the bullets. The depiction of a character's flaws goes a long way in making the character human and relatable. But the film's relentless deification of its central character employs only the setbacks in Dhoni's journey to make us sympathise with him, and conveniently skirts his shortcomings.

Sushant Singh Rajput excels as an actor, here. Be it the walk or the subtle grin, or the accurately Xeroxed signature shots, he is every bit believable as Dhoni. His steadfast imitation exudes sincerity and doesn't come off as showboating. Disha Patani as Priyanka Jha and Kiara Advani as Sakshi deliver fine-tuned performances, but the love tracks add nothing to the story except boredom. And sadly, they fill up much of the second half. Bhumika Chawla is well cast.

The loud and occasionally hammed up music is suggestive of the film's awe and reverence for its central character. And the overlong duration is a major kill - the film could easily be 30 minutes short. The film is technically competent, though.

Despite everything we've said, ardent Dhoni fans will however have a ball. The film gives them plenty of elevations of their hero, more than plenty references to many other cricket legends, and original cricket footage at accurate moments, and more than everything, relives the best highlights from Dhoni's cricket career. Watch it if you are a fan.
Share. Save. Connect.
Tweet
M.S. DHONI: THE UNTOLD... SNAPSHOT
M.S. DHONI: THE UNTOLD STORY SNAPSHOT 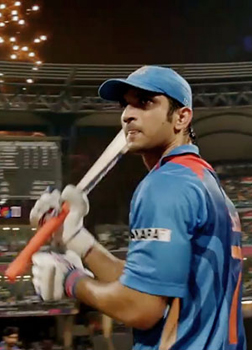 ADVERTISEMENT
This page was tagged for
M.S. Dhoni: The Untold Story telugu movie
M.S. Dhoni: The Untold Story reviews
release date
Sushanth Singh Rajput, Anupam Kher
theatres list
Follow @fullhyderabad
Follow fullhyd.com on
About Hyderabad
The Hyderabad Community
Improve fullhyd.com
More
Our Other Local Guides
Our other sites
© Copyright 1999-2009 LRR Technologies (Hyderabad), Pvt Ltd. All rights reserved. fullhyd, fullhyderabad, Welcome To The Neighbourhood are trademarks of LRR Technologies (Hyderabad) Pvt Ltd. The textual, graphic, audio and audiovisual material in this site is protected by copyright law. You may not copy, distribute, or use this material except as necessary for your personal, non-commercial use. Any trademarks are the properties of their respective owners. More on Hyderabad, India. Jobs in Hyderabad.