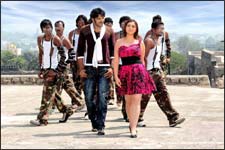 Karthik Pasupulate / fullhyd.com
EDITOR RATING
2.0
Performances
Script
Music/Soundtrack
Visuals
2.0
2.0
1.0
1.0
Suggestions
Can watch again
No
Good for kids
No
Good for dates
No
Wait to rent it
No
The most remarkable thing about Badmash is that the hero looks a little like Prabhas. A "little Prabhas", to be precise. Naga Siddarth stands nowhere near the 6 ft mark. Anyways, we do not get to choose our genes, do we?

There isn't much to rave about this one - nothing at all. It's just one of those films where everything that can go wrong, well, goes more than wrong.

Naga Siddarth is this bad, bad, boy. He isn't promiscuous; he just needs to have his way, being the only, and incorrigible, son of a rich, indulgent father (Suman), and a mother who doesn't speak Telugu. He's been expelled from all but one college in the city.

This particular engineering college is run by a fanatical moralist principal with a pretty daughter. The badmash joins the college to prove a thing or two about ideal college life and real love to the screwball principal.

If you are wondering what the motivation could be to set off on such a mission, well, apparently, it is just for kicks. He gets to woo the principal's daughter while ridding her off a psychotic stalker/lover and winning a hockey tournament for the college. In short that's what the film is all about. No, it's much worse.

It is no exaggeration to say that the best part of the film is the interval. With a plot like that, you are really banking on the writing and the music to take you home. The writing, however, is just downright silly.

The over-the-top histrionics of the guttural Venu Madhav notwithstanding, the only thing that could have brought out a grin or two is the comedy track, which comes undone by the sheer inability of the writers to work up some much needed humour.

The collective presence of actors like M S Narayana, Dharmavarapu Subramanyam and Babu Mohan adds no comic value, stuck with hopeless lines as they all are.

Ditto with Naga Siddarth. He's as raw as they come. Except for a slight resemblance to Prabhas, this newcomer has nothing much that's particularly striking about him, at least in terms of what is on display. To compound his woes, he gets no help from any other department. Meanwhile, Ekta Khosla looks as pretty as she can, for there is really nothing much she has to do.

Are we being too harsh on the first time director Vandemataram Sreenivas? Maybe he saw something in the idea that he did not manage to translate on screen, but you'd have surely expected him to dish out a decent music score. However, the music turns out to a mish-mash of uninspiring sounds. The visuals follow suit, and the lesser said about the narrative, the better.

In all, Badmash is just a non-starter. It's one of those movies that test the limits of your kindness.
Share. Save. Connect.
Tweet
BADMASH SNAPSHOT

ADVERTISEMENT
This page was tagged for
Badmash telugu movie
Badmash reviews
release date
Naga Siddarth, Ekta Khosla
theatres list
Follow @fullhyderabad
Follow fullhyd.com on
About Hyderabad
The Hyderabad Community
Improve fullhyd.com
More
Our Other Local Guides
Our other sites
© Copyright 1999-2009 LRR Technologies (Hyderabad), Pvt Ltd. All rights reserved. fullhyd, fullhyderabad, Welcome To The Neighbourhood are trademarks of LRR Technologies (Hyderabad) Pvt Ltd. The textual, graphic, audio and audiovisual material in this site is protected by copyright law. You may not copy, distribute, or use this material except as necessary for your personal, non-commercial use. Any trademarks are the properties of their respective owners. More on Hyderabad, India. Jobs in Hyderabad.