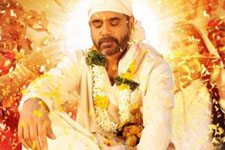 Deepa Garimella / fullhyd.com
EDITOR RATING
8.0
Performances
Script
Music/Soundtrack
Visuals
8.0
7.0
8.0
6.5
Suggestions
Can watch again
No
Good for kids
Yes
Good for dates
No
Wait to rent it
No
If this penniless fakir of inexplicable miracles were alive today, what impact would he have on our society? In an age of exaggerated cynicism and rationalization, in an age in which terms like "baba" and "swami" are increasingly taking on not-so-nice meanings, where would his story stand?

Would his torn white (and not saffron - that color people seem to be afraid of) robes placate people suspicious of a communal agenda? Would his lack of a secret cabinet with hidden treasures comfort skeptics concerned about the masses being duped of their money? Would his succinct pearls of ordinary wisdom mollify netas suspecting a political ploy?

These are uncomfortable questions, but it would not be unrealistic to assume that Sai Baba of Shirdi, who had his share of detractors then, is sure to face plenty of criticism in this day. However, even a single reading of the Sai Satcharita is enough to prompt the question - can today's faith move mountains like it did then? Or, at the very least, heal disease? Of course, if you know a Sai Baba devotee, you know you will get a vehement yes for an answer.

K Raghavendra Rao's latest devotional attempts to depict the life of the simple saint (played by Nagarjuna), and is a dramatization of significant events described in the Sai Satcharita. The film traces Sai Baba's life from the time he was a wandering teenager who set up camp under a tree in Shirdi, first attracting the attention of Mhalsapati (Sarath Babu) and Gangabai (Rohini Hattangadey).

After his journey to the Himalayas, during which he studied all religions he could, he came back to Shirdi. He started being referred to as Sai and Baba, and from then on, his simplicity and wisdom, and an occasional miracle, made devout bhaktas out of people not just from the village, but also from lands far away. Sai's popularity infuriated many, including local moneylender Bhatia (Sayaji Shinde), who tried his best to defame him, even going as far as to get him murdered.

Whether you find Shirdi Sai, the movie, good or not depends entirely on you and your affinity to the object of faith here, and not on its maker. It is like hearing your favourite lunchtime folk tale told by your grandmother for the 15,678th time - would you judge it? There hasn't been a Telugu Sai Baba movie in a long while now, and by virtue of that fact alone, this film is likely to draw in lots of devotees.

Shirdi Sai, then, is a gratifying portrayal for Sai Baba devotees. Emotions run high, miracles are hailed, and nerves are soothed. There is some cinematic melodrama on display, and it all serves to effectively reproduce the legend of the saint. Devotees are likely to be moved by certain well-made scenes - the Urs-Ramanavami story; the 3-day period when Sai's soul is believed to have briefly left his body; and his eventual death, when he passes away after taking on Tatya's suffering.

But there is something about it that doesn't entirely click. The film does not conjure up that intense bhakthi that devotional movies are generally known to. Maybe it is the fact that Sai's straightforward biography does not lend itself to grandiose depictions. Or maybe it is the fact that the movie has a rather old-fashioned treatment of its characters, not unlike a TV serial. Also, the studio sets prevent some scenes from rising to their potential.

That Nagarjuna Akkineni leads this film is a significant thing. The star, on his part, has put in a good performance. The role is much less intense than his roles in Annamayya and Sri Ramadasu, but he has that calm yet strong presence that is needed for it. His persistence in sticking to genres like these is heartening, and hopefully paves the way for his contemporaries to take on leading roles that are not in competition with those of their sons.

There is generally a good set of performances on display. Sarath Babu is dignified, Srikanth puts in a passionate act as Das Ganu, Komolinee Mukherjee is graceful as Radhakrishnamai, and Ruchita Deshmukh is pretty good as Lakshmi Bai. The youngster acting as Tatya is clearly gunning for a Nandi. Rohini Hattangadey should have been given more screen time, and Tanikella Bharani is an even rarer sight. It is mostly Sayaji Shinde and his comic sidekicks (Ali) who have a lot to do. Meanwhile, Dharmavarapu is hilarious.

Apart from Srihari as a Britisher (whose office is graced by a photo of the current Queen Elizabeth, no less), nobody in the film jars you.

Meanwhile, Keeravani is as awesome as he has been with these period films. Many a scene has been sparked to life because of a bhajan that springs up or a veena's twang that accentuates the emotion in there.

Watch it if you're a devotee, or even if you are in need of a little bit of spirituality on celluloid. It's not spectacular, but it does the job all the same.
Share. Save. Connect.
Tweet
SHIRDI SAI SNAPSHOT 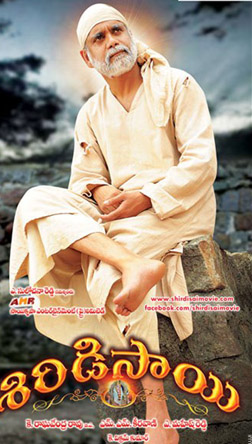 See Shirdi Sai full details
SHIRDI SAI USER REVIEWS
1 - 13 OF 13 COMMENTS
POSITIVE  |  NEGATIVE |  NEWEST  |  OLDEST  |  MOST HELPFUL  |  LEAST HELPFUL
USER RATING
5.5
4 USERS
Performances
Script
Music/Soundtrack
Visuals
NA
NA
NA
NA
Can watch again - NA
Good for kids - NA
Good for dates - NA
Wait to rent it - NA
Server Rack in hyderabad on 11th Oct 2012, 3:12pm | Permalink
NetRack offers a full lifecycle of services to Store, Secure, Streamline and Systemize passive and active network components like Server racks, Network Racks, Power Distribution Unit, Cable Organizer, Cable Runways, Lab Racks, Lab Tables, Wall Mount Racks, Fiber Distribution Unit, Network Enclosures, Server Enclosures etc., as well as Technology Equipments in order to help simplify and optimize your space utilization, and enable your business to adapt quickly and dynamically to variable environments.
neelivenugopal on 23rd Sep 2012, 3:25pm | Permalink
Nag as Shiridi Sai - Wonderful hearful experiences of Sai tavtvam,,,soothing music, heart touching climax.... Hats off to the Actor, Producer, Director and Music Director showing their dedication to pull of this Miracle at the boxoffice and hearts of Sai Devotee and general public in this 21st Century what more can you ask for !!!!
Kishore on 18th Sep 2012, 10:41am | Permalink
The movie is not in the same league as Annamayya and Sri Ramadasu. The very entry of Sai Baba into Shirdi (as a grown-up) is depicted in a way that worries you if the film will be a letdown. The people of the village are singing bhajans of Sai within the very first hour of his entry into the village - that is unlikely to have happened in real life. It takes people a while to accept someone as an avatar of God or as a prophet - a series of miracles and experiences. Also, Sai Baba, in the movie's first half, appears too keen and too quick to talk (and a little too loud). I do not of course know what Sai Baba of Shirdi was like in real life, but I would guess he would be soft, take his time to respond, and not look eager to spout fundas.

The movie picks up eventually, and the second half comes close to the experience we go to the movie for. And like others said, the Sayaji-Ali-Anant track resembles the Telugu-film humour of 20 years back. Just why Sayaji continues to hate Sai so much is not portrayed convincingly.

For a Sai experience, however, this is a good outing.
RATING
6
Arun Kumar on 10th Sep 2012, 6:41pm | Permalink
http://swaroop-king.blogspot.in/2012/09/the-words-god-life-and-death-may-be.html
Kishore on 10th Sep 2012, 7:27pm | Permalink
Good points. Some of your metaphors were good.
Latha on 9th Sep 2012, 9:36am | Permalink
Awesome movie.......... extraordinary performance by Nag.......... Sai baba feel in each and every scene......... Congrats Shiridi Sai team
anonymous critic on 8th Sep 2012, 8:59pm | Permalink
If there is one thing that will kill this movie in the box office, its the sayaji track. KRR shd realize comedy is not his cup of tea, it never worked in any of his earlier devotional flicks. Background and some songs were brilliantly picturized. Tatya, Srikant and Sharatbabu all did a great job, Nagarjuna was simply outstanding!!
RATING
7
RajNag on 10th Sep 2012, 7:17am | Permalink
Totally agreed. The comedy duo in Annamayya.. brahmi and gundu also was not worth keeping in the film. In a devotional movvie he need not have to go by the same formula and keep a comdey track. Yes that could kill the movie.
Ramana on 8th Sep 2012, 9:56am | Permalink
Ok Ok movie!Film is not so great yet nagarjuna brought some value in the movie.what is for nagarjuna not for sai baba...for saibaba there are lot movies better than this.but for nagarjuna this is better
RATING
7
Gkon on 8th Sep 2012, 12:15am | Permalink
???? ???? ?????????? ?????.This is the essence of Sai. Good effort by the team, though production values could have been more richer. Strong linkage is missing as the film tries to show bits and pieces of Sai life. Films based on spiritual genre should give more importance to the delivery of the message than commercial formula based production.
karthik on 7th Sep 2012, 11:56pm | Permalink
had tears in the climax...
comedy was bad. watch it...its worth
ravi on 7th Sep 2012, 1:31pm | Permalink
no comments..... if u already see baba movies... then why again watch same......
chandra on 7th Sep 2012, 1:17pm | Permalink
its a god movie , so no comments... if want see this movie sitdown infront of zee tv sharp 9am ever day
Asif on 6th Sep 2012, 8:42pm | Permalink
'exaggerated cynicism and rationalization', 'Saffron - that color ppl seem to be afraid of. ' succinct but strong phrases showing your ideology. Deepa ---.. Did u see the mountains that were moved by the faith in the past ??? Faith with its claimed exaltness - doesnt/shouldnt come with a use by date (i mean it shud be as effective as before). I wish if the movie focusses on 'spritual' than ritual essence else , Sai`s biography is nothing new......
anonymous critic on 6th Sep 2012, 4:52pm | Permalink
Thanks for the review.
LEAVE A COMMENT
fullhyd.com has 700,000+ monthly visits. Tell Hyderabad what you feel about Shirdi Sai!
MORE MOVIES
Latest Reviews
83
83 - Telugu
Shyam Singha Roy
The Matrix Resurrections - H...
The Matrix Resurrections
more
Pushpa: The Rise - Hindi
Pushpa: The Rise
Spider-Man: No Way Home
Spider-Man: No Way Home - Hi...
Spider-Man: No Way Home - Te...
Chandigarh Kare Aashiqui
Akhanda
Satyameva Jayate 2
Ghostbusters: Afterlife
Eternals (Telugu)
Contemporary Reviews
Raaz 3
Raaz 3 (3D)
To Rome With Love
Life Is Beautiful (Telugu)
People's War
more
Barfi
Arbitrage
The Campaign
Shark Night (3D)
Joker
Srimannarayana
Nirantharam Nee Oohale
Shirin Farhad Ki Toh Nikal P...
Finding Nemo (3D)
Random Reviews
Rhythm
Calcutta Mail
Vasu
Khushi
The Incredibles (Hindi)
more
Shikhar
Gangster - A Love Story
Sundarakanda
Short Kut - The Con Is On
Percy Jackson: Sea Of Monste...
Ra Ra Krishnayya
Minions (3D)
Om Namo Venkatesaya
Race 3
Darbar (Hindi)
SEARCH MOVIES
Dissatisfied with the results? Report a problem or error, or add a listing.
ADVERTISEMENT
SHOUTBOX!
{{todo.name}}
{{todo.date}}
[
ip{{todo.ip}}
]
{{ todo.summary }}... expand »
{{ todo.text }} « collapse
First  |  Prev  |   1   2  3  {{current_page-1}}  {{current_page}}  {{current_page+1}}  {{last_page-2}}  {{last_page-1}}  {{last_page}}   |  Next  |  Last
{{todos[0].name}}

ADVERTISEMENT
This page was tagged for
Shirdi Sai telugu movie
Shirdi Sai reviews
release date
Nagarjuna Akkineni, Srikanth
theatres list
Follow @fullhyderabad
Follow fullhyd.com on
About Hyderabad
The Hyderabad Community
Improve fullhyd.com
More
Our Other Local Guides
Our other sites
© Copyright 1999-2009 LRR Technologies (Hyderabad), Pvt Ltd. All rights reserved. fullhyd, fullhyderabad, Welcome To The Neighbourhood are trademarks of LRR Technologies (Hyderabad) Pvt Ltd. The textual, graphic, audio and audiovisual material in this site is protected by copyright law. You may not copy, distribute, or use this material except as necessary for your personal, non-commercial use. Any trademarks are the properties of their respective owners. More on Hyderabad, India. Jobs in Hyderabad.