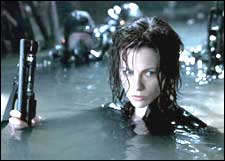 Himabindu Chitta / fullhyd.com
EDITOR RATING
3.0
Performances
Script
Music/Soundtrack
Visuals
NA
NA
NA
NA
Suggestions
Can watch again
NA
Good for kids
NA
Good for dates
NA
Wait for OTT
NA
Ever heard of the Lycans? Neither have we. Apparently they are a bloodthirsty race perennially at war with the Vampires who are, well, another bloodthirsty race. And neither species is related to humankind (though you'd wonder how come, since the basic description fits so well).

Don't mistake me, this is no metaphor. Bloodthirsty, in the context of this movie, actually translates into the Vampires drinking blood in fancy wine glasses at a feast. (No, it was not red wine. Yes, the girl sitting next to me almost did faint at this scene.)

This 2003 film deals with the origins of the 1,000-year-old war, where the good guy turns out to be bad, and a monstrous hybrid (half-Vampire, half-Lycan) helps destroy him.

But plot is hardly the strong point of this movie. Wait, there actually isn't one at all. But watch it and you'll discover how much meaningless butchery can be packed into a single movie. The highlight is, of course, the "awakening" - a scene where a dead man is brought to life. Blood is poured into his lifeless, drained body, and the path taken by the blood is shown graphically on screen. As his heart begins to beat again, and he opens his decrepit eyes, you are wondering how much more you should be paid to review such movies.

Kate Beckinsale plays the lead role, which is unusual for a female actor, especially in a movie of the blood-and-gore variety. But not surprising, considering she is engaged to the director, Len Wiseman. We wonder if Kate watches her own movies (though in the case of Underworld, we wouldn't blame her if she desisted). Word of advice, darling: we like you much better as eye candy in the mushy, Serendipity sort of movies. The whole flashing firearms with a steely expression in your eyes thing just isn't meant for you.

A lot of the cinematography of this film is "inspired" by The Matrix. The scenes shot in the rain especially look like they have been taken right out of the older sci-fi classic. The actors' outfits probably have been too, if you look closely. The whole look and feel of the movie is dark, gloomy and serious - black and grey are the only colors your eye encounters. And red, of course - how could I forget the bloody (and this is not profanity) party thrown by the Vampires?

The moviemakers thought they'd add a fantastic touch by invoking vampires and werewolves, instead of plain old humans. Well, it worked - and a little too well, perhaps. Now mothers can tell their kids horror tales about this film instead of about the actual mythical beings.
Share. Save. Connect.
Tweet
UNDER WORLD (ENGLISH) SNAPSHOT

ADVERTISEMENT
This page was tagged for
Under World (English) english movie
Under World (English) reviews
release date
Kate Beckinsale, Scott Speedman
theatres list
Follow @fullhyderabad
Follow fullhyd.com on
About Hyderabad
The Hyderabad Community
Improve fullhyd.com
More
Our Other Local Guides
Our other sites
© Copyright 1999-2009 LRR Technologies (Hyderabad), Pvt Ltd. All rights reserved. fullhyd, fullhyderabad, Welcome To The Neighbourhood are trademarks of LRR Technologies (Hyderabad) Pvt Ltd. The textual, graphic, audio and audiovisual material in this site is protected by copyright law. You may not copy, distribute, or use this material except as necessary for your personal, non-commercial use. Any trademarks are the properties of their respective owners. More on Hyderabad, India. Jobs in Hyderabad.