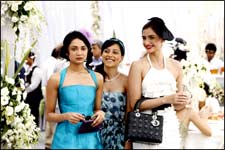 Deepa Garimella / fullhyd.com
EDITOR RATING
4.0
Performances
Script
Music/Soundtrack
Visuals
7.0
4.0
8.0
8.0
Suggestions
Can watch again
No
Good for kids
No
Good for dates
Yes
Wait for OTT
Yes
Don't get us wrong - Aisha is an enjoyable film in case you're geared up for what it offers. The problem is that a movie that is dressed like a wedding cake that belongs to 18th century England isn't exactly trying to attract a healthy mix of watchers in the first place, and Aisha doesn't expand its target audience even during its run time.

Aisha tries to be a slice-of-life flick, but it is the kind of story with the kind of characters and situations that you'll identify with only if you want to identify with them. Basically, it simply won't draw out the unwilling participant.

It's not totally about its elitist setting - Aisha (Sonam Kapoor) belongs to the swish set, and her "event management" career is eclipsed by her absolutely behenji attempts at matchmaking that she devotes herself to full-time - that doesn't quite gel. It's about the fact that this is a flick about issues. The thing is that general audiences don't want to watch a "issues" on screen unless the film has an exceptionally innovative style of story-telling, or, alternatively, star power.

But then, though Aisha's (the protagonist) shallowness and overall lack of meaningful purpose in life seems to be shoved down our throats, it is really the interplay among the rest of the characters that gives this film its direction.

Aisha's life revolves round imposing her ideas on others, and her latest exploit is her friend Shefali (Amrita Puri), a middle-class girl-next-door. In trying to get her hitched to who she thinks is the perfect man for her, and in trying to "help" her out, she fails to see that she herself is the one who's not all together.

Involved in her restless puppetry are the businessman's son Randhir Gambhir (Cyrus Sahukar), her best friend Pinky (Ira Dubey), and the well-built and unsubtle Dhruv (Arunoday Singh). Aisha has a well-wisher in the form of the successful, sensible Arjun Burman (Abhay Deol), who is amused by her self-centred nature and her childishness, but is protective of her.

The film's pluses consist of its delicious visuals, and its sense of fashion - unabashedly touted as its USP. It would all have run out of soul of not for the music, which is a different story altogether; Amit Trivedi's stunning compositions seem wasted in a production that is clearly doomed to have a short run at the box office.

Sonam Kapoor's Aisha is way too feather-brained and vain; and it's difficult to make out whether it's the character that is so shoddily written or whether it's the actress who is overdoing it. She's gorgeous, however, and probably fits certain nuances of the role better than others of the current crop.

The movie is filled with spontaneous performances, with everyone pitching in to retain the mood of the proceedings, but really, the one character who manages to hold everything in place is the unpretentious Arjun Burman. Again, we don't know if it's the role that is refreshing among a battalion of confused rich brats and easily-influenced 20-somethings, or if it is Deol who is simply brilliant.

Yes, this chick flick is a good-looking film and has its moments, as well as a potential to leave you thinking at the end of it all. Unfortunately, looks aren't everything, and neither is potential.
Share. Save. Connect.
Tweet
AISHA SNAPSHOT

See Aisha full details
AISHA USER REVIEWS
1 - 1 OF 1 COMMENTS
POSITIVE  |  NEGATIVE |  NEWEST  |  OLDEST  |  MOST HELPFUL  |  LEAST HELPFUL
bijondas2222 on 7th Aug 2010, 6:00pm | Permalink
The main string of the movie is GLAMOUR, Aisha - glamour= nothing........The movie is very good looking, good polish, apart from dat it has nothing......The main problem with the movie is its script, very ordinary narration of characters. Even the character of Aisha has lots of potential to convey, but due to poor direction from debutant director Rajshri Ojha it actually bites the dust......It is a fun film , Ira Dubey's comedy timing is worth mentioning (she inherited nautanki element from her mother's acting). Abhay Deol's talent is fully wasted due to bad direction, and limited screen presence....Amrita Puri, Lisa Hayden, Cyrus Shahukar are good in this film... This is Sonam Kapoor's film... She looks great with designer clothes, some good specs, jewelery, and bags ( i like dat).....As far as acting is concern there is many scope for improvement....but one can feel the innocence... Music though not chart basters but very soothing.......First half of the movie is introductory, contains no substance, 2nd half is bit boring due to very loose screenplay and so called ghisi-piti story (anyone can predict)............The film is one time watch one can enjoy if he dont possess any expectation........The film lacks soul actually, I cant define it as a comedy movie, or emotional one, or something refreshing........everything is dere dats the problm actually............

ADVERTISEMENT
This page was tagged for
Aisha hindi movie
Aisha reviews
release date
Abhay Deol, Sonam Kapoor
theatres list
Follow @fullhyderabad
Follow fullhyd.com on
About Hyderabad
The Hyderabad Community
Improve fullhyd.com
More
Our Other Local Guides
Our other sites
© Copyright 1999-2009 LRR Technologies (Hyderabad), Pvt Ltd. All rights reserved. fullhyd, fullhyderabad, Welcome To The Neighbourhood are trademarks of LRR Technologies (Hyderabad) Pvt Ltd. The textual, graphic, audio and audiovisual material in this site is protected by copyright law. You may not copy, distribute, or use this material except as necessary for your personal, non-commercial use. Any trademarks are the properties of their respective owners. More on Hyderabad, India. Jobs in Hyderabad.