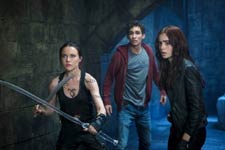 Swayamsrestha Kar / fullhyd.com
EDITOR RATING
5.0
Performances
Script
Music/Soundtrack
Visuals
6.0
5.0
5.0
5.0
Suggestions
Can watch again
No
Good for kids
No
Good for dates
No
Wait to rent it
Yes
If sparkly vampires and cheesy, corny romance is your thang, then Mortal Instruments will come as a rude shock. First off, we are adamant to call out some copious amounts of bull, about the movie, that have been doing the rounds of late. It is NOT like Twilight. If anything, the movie seems to be desperately trying to avoid being compared to a franchise where the biggest adventure in the female protagonist's life was to succeed in persuading her prissy vampire boyfriend to knock her up.

The vampires here are terrace-dwelling bloodsuckers, just like the devil - in all his gleeful evilness - had intended them to be. The werewolves are grimy and menacing, and they thankfully refrain from shedding their clothes at every available opportunity.

And the male lead doesn't sparkle. Not even once. Not even a tiny twinkle anywhere.

That said, Mortal Instruments: City of Bones, in itself doesn't have a novel premise. And we have grown up on a healthy diet of Harry Potters, Constatantines, Buffys, Van Helsings and Underworlds to see when and what the series borrows from the medieval/gothic-supernatural-meets-normal-life genre.

Clary Fray (Lily Collins) is a spunky red-haired wisp of a girl whose unnerving visions of strange symbols worry her mother Jocelyn (Lena Headey). One evening, Clary and her best friend Simon (Robert Sheehan) go into a club that's teeming with nubile teenagers of the gothic persuasion, and music of the hard-core heavy metal kind. While here, Clary comes across a group of hooded, tattooed teenagers whom only she can see.

Next off, Clary's mother disappears, and monsters start popping out from behind previously innocuous doors in her house. It is then that she is accosted by Jace (Jamie Campbell Bower), who tells her that her mother was a "Shadowhunter" - a half-angel who fights demons that are invisible to human (or rather "Mundane") eyes.

Jace and his gang of inked, kohl-eyed and leather-clad Shadowhunter friends take Clary to the Institute, where the chief Shadowhunter, Hodge Starkweather (Jared Harris), tells her that Clary's mother had stolen the cup of the Angel Raziel (one that turned humans into Shadowhunters) from Valentine Morgenstern (Jonathan Rhys Meyers), a Shadowhunter who was determined to cross over to the dark side, because someone's got to play the villain you know.

Clary is informed that her mother had gotten a warlock to suppress Clary's memories so that the two of them could have a normal life. And in doing so, Jocelyn had also left the location of the cup in some hoarded-up corner of Clary's mind. She now has to retrieve her memories, her mother and the Mortal Cup, before Valentine shows up to wreck havoc in everybody's general direction.

Cassandra Clare's Mortal Instruments novels have already been allotted their place as tiresome additions to the burgeoning rows of shelves dedicated to the "chick-lit-fantasy" genre, following in the footsteps of other clichéd writers like Richelle Mead and P C Cast. Naturally, then, the onscreen adaptation was bound to suffer from an utter lack of cohesive narrative, or a credibly impressive screenplay.

The cinematography is adequate, though hardly ground-breaking. There are generous helpings of gore and goth, as well as thumping music, especially during the action scenes. While the editing in the first hour is fairly steady, it slips up in a number of places during the second hour, as a result of which, a lot of loose threads manage to escape from the haphazardly tied-up yarn at the end.

Lilly Collins throws herself earnestly into her role, and Jamie Campbell Bower is decidedly edgy and intense as the brooding (sigh! when will women stop being drawn to these types?) Jace. However, it breaks our heart to report that the beautiful (this reviewer believes that no other word would suffice) Jonathan Rhys Meyers is seriously disappointing as Valentine.

The director, Harald Zwart, clearly doesn't know what he wants the movie to be - a sloshfest of gore, slimy monsters and unimaginatively choreographed action scenes, or a fantasy movie which focuses on getting across the story elements to the newbie viewer who knows nothing about the books, or a love story set against the backdrop of medieval cathedrals and some good ol' monster-slaying. 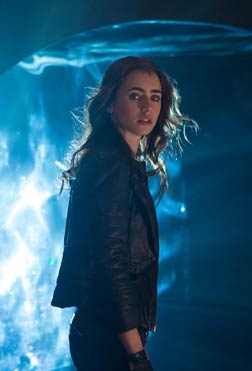 ADVERTISEMENT
This page was tagged for
The Mortal Instruments: City Of Bones english movie
The Mortal Instruments: City Of Bones reviews
release date
Lily Collins, Jamie Campbell Bower
theatres list
Follow @fullhyderabad
Follow fullhyd.com on
About Hyderabad
The Hyderabad Community
Improve fullhyd.com
More
Our Other Local Guides
Our other sites
© Copyright 1999-2009 LRR Technologies (Hyderabad), Pvt Ltd. All rights reserved. fullhyd, fullhyderabad, Welcome To The Neighbourhood are trademarks of LRR Technologies (Hyderabad) Pvt Ltd. The textual, graphic, audio and audiovisual material in this site is protected by copyright law. You may not copy, distribute, or use this material except as necessary for your personal, non-commercial use. Any trademarks are the properties of their respective owners. More on Hyderabad, India. Jobs in Hyderabad.