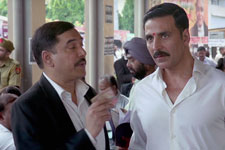 Ajay Kumar R / fullhyd.com
EDITOR RATING
7.5
Performances
Script
Music/Soundtrack
Visuals
8.0
7.0
8.0
6.0
Suggestions
Can watch again
Yes
Good for kids
Yes
Good for dates
No
Wait to rent it
No
Arshad Warsi (the "Circuit" to Munnabhai), in a recent interview, dismissed the speculation that he wasn't offered the role of Jolly in Jolly LLB 2 because Akshay Kumar was bigger than he, by saying that with a celebrity like the latter, the movie would look larger than before.

And the humble Warsi is right. Even though he, too, could have excelled in Jolly's role as he did in the original film, it was a wise decision to employ Akshay Kumar as his powerful emoting and star power make this edition one of the most tragic yet funny courtroom dramas Bollywood has seen in recent times.

And ensembling with director and writer Subhash Kapoor, Fox Star Studios, and veteran co-actors including Saurabh Shukla and Annu Kapoor, the 49-year-old Airlift star breaks from his action-hero avatar to give you an experience that will be etched in your memory for a very long time.

Jagdishwar Mishra (Akshay Kumar), or Jolly, a canny and corrupt lawyer, is swept by remorse after one of his clients, Hina Siddiqui (Sayani Gupta), a helpless widow of a man (Iqbal Qasim played by Manav Kaul) killed in a "police encounter", commits suicide after he swindles two lakhs from her with the promise of "justice". Witnessing the destruction he has caused out of greed, he takes up the onus of filing a PIL and fighting the case himself. But the defendant, the main accused in the encounter, appoints formidable lawyer Sachin Kantilal Mathur (Annu Kapoor) who has successfully defended several big names before.

Jolly, although witty and intelligent, lacks Mathur's conviction or experience. Plus, the young lawyer already has a blot on his reputation that may work against him. And then unfolds a game of chess between the prosecution and the defense that takes you on a journey from a dull, sultry and smelly courtroom in Lucknow to a Kashmir under siege. Guiding you are a hilarious, plump judge (Justice Sunderlal Tripathy helmed brilliantly by Saurabh Shukla) with meaty dialogues and lessons, a dangerous, intimidating encounter specialist who has nowhere to hide, an elusive militant (Suryaveer Singh by Inaamulhaq), a young barrister who is willing to go to any lengths for justice and to clear his own conscience, and a law system that is in a moral impediment - all in a comical and satirical discourse.

Although it's hard to vouch for the validity of its portrayal of the Indian legal system or bureaucracy, Jolly LLB 2 aptly narrates the system's issues from the perspective of litigants who have suffered. The problems that pervade our law system, as opined in the film, are majorly in the grassroots - the smaller sessions and district courts. There are underqualified LLBs fighting cases in their own time. All they are looking for is to get their own chambers. There are also good lawyers that are having a hard time due to the rat race. And there is little scope for a criminal (or an innocent man) to be represented fairly by "criminal lawyers". And the all-pervading corruption in the form of bribery and sycophancy often affects judgments. The judge in the movie also points out the low ratio of lawyers to cases. All these seem to coincide with the recent observation of the Bar Council that nearly half of India's lawyers are charlatans.

Subhash Kapoor takes you through an engaging plot which is flanked by crisp dialogue, dark and riotous comedy, well-developed characters, clever and well-researched court procedures, and a neatly underlined message.

Akshay Kumar can make you laugh with his comic timing, then think with his intensity, and then laugh again with another crack. Perhaps this unique trait earned him the role, replacing Warsi. Warsi is more suited for dark comedies as his persona doesn't need to balance between intensity and slapstick - he is an alloy of the two. And that is what makes his Jolly so Jolly. But Akshay Kumar shows you Jolly like you have never seen him before. And it is bigger and better, and serious, fun. And his emoting in the more serious scenes evokes a sense of tragedy, and makes you realize the solemnity and pathos of the situation despite the bouts of laughter.

But there is also Saurabh Shukla (the judge), who is the most memorable character in this black comedy. Shukla plays his role effortlessly. Every line of his has been crafted to perfection, to induce side-splitting laughter. In fact, he could replace Akshay Kumar as Jolly in Jolly LLB 3 (if that ever happens), because he is jollier than Jolly.

Huma Qureshi plays Pushpa, Jolly's wife, a strong woman who fights off gun-toting goons to defend her husband. Her acting, too, is noteworthy, despite the limited screentime. Annu Kapoor reprises the raspy personality of his Vicky Donor character, and is a complete delight to watch. Other actors including Nikhil Dwivedi and Sayani Gupta offer deft finishing touches.

Vishal Khurana, Manj Musik, Meet Bros and Chirantan Bhatt deliver both fun and sombre music as the situation demands. However, Kamal Jeet Negi's cinematography, although not bad, doesn't stand out or complement the overall filmmaking. Darker tones could have been employed, but perhaps they didn't want to go overboard.

Although Jolly LLB 2 doesn't feature the most inventive court trial in Indian cinema history, it is certainly high on tragedy, raw emotions, morals and starkness of justice, and will appeal to both the thinking and the commercial audiences.
Share. Save. Connect.
Tweet
JOLLY LLB 2 SNAPSHOT 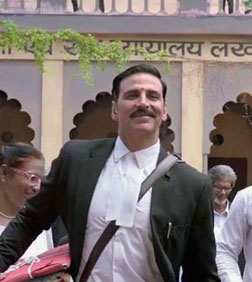 ADVERTISEMENT
This page was tagged for
Jolly LLB 2 hindi movie
Jolly LLB 2 reviews
release date
Akshay Kumar, Saurabh Shukla
theatres list
Follow @fullhyderabad
Follow fullhyd.com on
About Hyderabad
The Hyderabad Community
Improve fullhyd.com
More
Our Other Local Guides
Our other sites
© Copyright 1999-2009 LRR Technologies (Hyderabad), Pvt Ltd. All rights reserved. fullhyd, fullhyderabad, Welcome To The Neighbourhood are trademarks of LRR Technologies (Hyderabad) Pvt Ltd. The textual, graphic, audio and audiovisual material in this site is protected by copyright law. You may not copy, distribute, or use this material except as necessary for your personal, non-commercial use. Any trademarks are the properties of their respective owners. More on Hyderabad, India. Jobs in Hyderabad.