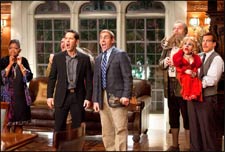 Samrat Sharma / fullhyd.com
EDITOR RATING
5.5
Performances
Script
Music/Soundtrack
Visuals
6.5
5.5
7.0
6.5
Suggestions
Can watch again
No
Good for kids
No
Good for dates
Yes
Wait to rent it
Yes
Short review - if you've seen Bheja Fry, don't bother. Essentially a remake of the same French film, Bheja Fry was based on (Dinner Game), Dinner For Schmucks is a mediocre and inferior version of both those films, simply by trying to be ultra-safe and aiming to be a certain kind of films that doesn't take risks and makes an exact amount of money back.

For those of you who haven't seen either Dinner Game or Bheja Fry, the story is about a dinner hosted by a bunch of rich people, where they invite an idiot and make fun of him. When it's Career Guy Tim's (Paul Rudd) turn, he gets along Barry (Steve Carrell), who is an oblivious straight man, and ends up nearly ruining his life in a few hours.

The problem with Dinner For Schmucks is that it removes the cheating husband angle from Tim's arc. Tim is now just a basically decent guy trying to improve his life by doing something his bosses ask him to do. By not making him a person much in need of a lesson, not only has an important and funny part of the story been excised, all the sympathy for the Barry character is lost.

It doesn't help that Steve Carrell plays Barry in an annoyingly stupid way, where you really want to strangle the dude. It's annoying and very Carrell-ish, which was funny in Anchorman, but is getting a bit much now (The Office though? Gold).

The direction is nothing special either, with Jay Roach removing all style and substance from his craft and letting the actors do their bit. Thankfully enough, the actors are terrific. Jemaine Clement is utterly hilarious as a narcissistic artist, and Lucy Punch is extremely funny in her turn as Tim's old flame. While Zach Galifianakis doesn't exactly display a lot of range here, he is still fresh and funny in the way he approaches his own idiot, Therman.

Bruce Greenwood, Larry Wilmore and Kristen Schaal are the other stand-outs in a very well-rounded collection of funny people making even the most banal jokes sound hilarious. It's a funny movie, thanks to these people, but the quality of jokes and humour is the level of your average Monday night sitcom. You get a few yucks, but you don't remember 5 minutes after.

This is the very definition of an average film, and I would strongly suggest waiting for it to air on one of the movie channels.
Share. Save. Connect.
Tweet
DINNER FOR SCHMUCKS SNAPSHOT

ADVERTISEMENT
This page was tagged for
Dinner For Schmucks english movie
Dinner For Schmucks reviews
release date
Steve Carell, Paul Rudd
theatres list
Follow @fullhyderabad
Follow fullhyd.com on
About Hyderabad
The Hyderabad Community
Improve fullhyd.com
More
Our Other Local Guides
Our other sites
© Copyright 1999-2009 LRR Technologies (Hyderabad), Pvt Ltd. All rights reserved. fullhyd, fullhyderabad, Welcome To The Neighbourhood are trademarks of LRR Technologies (Hyderabad) Pvt Ltd. The textual, graphic, audio and audiovisual material in this site is protected by copyright law. You may not copy, distribute, or use this material except as necessary for your personal, non-commercial use. Any trademarks are the properties of their respective owners. More on Hyderabad, India. Jobs in Hyderabad.