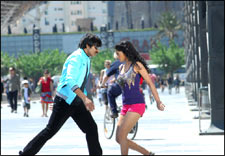 Deepa Garimella / fullhyd.com
EDITOR RATING
6.5
Performances
Script
Music/Soundtrack
Visuals
8.0
6.0
6.0
7.0
Suggestions
Can watch again
No
Good for kids
No
Good for dates
Yes
Wait for OTT
No
Easily, the thing that works most in favour of Don Seenu is that it doesn't mess itself up by taking itself too seriously. It feels like an ordinary movie by standards that certain films nowadays are getting us used to, but because it celebrates its sheer tomfoolery, it keeps from falling limp.

Don Seenu is about the ambitious Seenu (Ravi Teja), who has grown up with just one passion - that of becoming a world-class don. Thanks to his enterprising nature, he gains access to the cream of the city's goondas, and uses his cleverness to play off the top two - Machiraju (Sayaji Shinde) and Narsing (Sri Hari), fierce rivals - against each other.

The movie has all the energy of a typical Ravi Teja flick, but it keeps needing to survive on certain modes of resuscitation, that include air-headed leading ladies, below-the-belt jokes, and frequent Mani Sarma hand-me-downs.

How much you like the script of this movie depends on how okay you are with suspension of disbelief for a good part of 2 hours and 45 minutes. Don Seenu must woo the sister of one of the villains, to further his rival's destructive aims, and this sets off a string of mind games that a 4-year-old wouldn't fall for.

Then again, you're better off not letting the "big picture" hurt your experience, because there is a kind of gay abandon to the movie all through. The fights in the end would put Rajnikanth to shame, the hero keeps shamelessly manipulating his heroines, and there are way too many songs, but in general, it's a whole lot of orchestrated confusion.

Among Venu Madhav's raucous lunacy, Ravi Teja's grab-the-scene-by-both-hands brand of buffoonery, or Brahmanandam's poker-faced loudness, Don Seenu has several moments of comic brilliance. This, despite the absolute silliness, that passes off as humour, from the ladies.

Clearly, star power gives Don Seenu solid reinforcement. While the film practically leans on Ravi Teja for its essence, the rest of the male cast puts up a neat show, despite the weaker moments in the writing. Brahmanandam, however, has been criminally wasted, and so have side kicks like Raghu Babu and Brahmaji.

This being an out-and-out comedy, the villains are made props of helplessness in order to enhance the humour, but aren't as comic as you'd want them to ideally be. Both Sayaji Shinde and Srihari do a good job, though.

The women are in this for the songs and the skin show, and to take the preposterous story forward. Shriya Saran is still made of the stuff she was made of in the earlier part of this decade, but not a lot has changed - either in terms of the maturity in her acting or the perennially turned-on look she carries. Saran and Anjana Sukhani both manage to keep the flick colourful, though.

Mani Sarma's tunes are passable, and some of them are even too lengthy for comfort. However, splendidly shot locales abroad and a lot of gloss all over help the film's cause.

In all, Don Seenu is not the kind of flick that might inspire poetry in you, but lighten up life for the moment it will.
Share. Save. Connect.
Tweet
DON SEENU SNAPSHOT

See Don Seenu full details
DON SEENU USER REVIEWS
1 - 4 OF 4 COMMENTS
POSITIVE  |  NEGATIVE |  NEWEST  |  OLDEST  |  MOST HELPFUL  |  LEAST HELPFUL
USER RATING
2.7
3 USERS
Performances
Script
Music/Soundtrack
Visuals
4.0
2.0
1.7
4.3
Can watch again - No
Good for kids - No
Good for dates - No
Wait for OTT - Yes
akm on 16th Aug 2010, 8:10pm | Permalink
Both the heroines will give strip dancers a run for money. Their characters are so dumb that you will doubt their basic IQ level. Aged Shriya should quit acting or think of showing some emotions. New heroine is busy showing her curves and dumbness levels relative to shriya character.
Nothing spl about raviteja.

RATING
3
Saradhi on 16th Aug 2010, 10:35am | Permalink
I think female leads are allergic to clothes in the songs. Especially Shriya. What is there to show specially. Everything she had already shown. What else is remaining? It may be new if she reduces some more clothes. Nonsense. Are there any laughable jokes. I have got irritated because of them. Performance of Ravitheja is a bit better. All other departmnets are very very bad in this movie. Don Seenu is a Down Seenu movie. Don't waste your money on this kind of stuff. Save your money and eat some good food. Ofcourse! if you have softcorner to encourage the hard workers behind the screen, you may go for it. Just like one dialogue regarding Coffee in Shaurya movie "26 tonnes of fuel, 3 hours flight, 200 people's hard work is there in making a cup of coffee, Hence, don't waste it".
stylish_sridhar on 9th Aug 2010, 10:19pm | Permalink
This is a good movie. Though, it has some double entendres, it's overall a nice movie.

Vishnu S on 7th Aug 2010, 10:17am | Permalink
I am dying to see Telugu movies come out of this ridiculous story structures..Mafia buffoons, Faction Jokers, Stupid boring college love stories.. I would love to see our TOP actors acting their age..something in lines of Tom Hanks, George Clooney.. I wonder why they feel ashamed to act as a father of 16 yr old kid or something..all want to be young bloods, dancing with teens..this is pathetic..Ofcourse this movie is RaviTeja's movie.. But he is capable of even more (Read..My Autograph..,neninthe) He is an energetic hero..who can be used for anything..RaviTeja..If you read this, pls break out of this vicious crappy circle and do some awesome roles..

ADVERTISEMENT
This page was tagged for
don seenu telugu full movie
don seenu telugu movie
Don Seenu telugu movie
Don Seenu reviews
release date
Follow @fullhyderabad
Follow fullhyd.com on
About Hyderabad
The Hyderabad Community
Improve fullhyd.com
More
Our Other Local Guides
Our other sites
© Copyright 1999-2009 LRR Technologies (Hyderabad), Pvt Ltd. All rights reserved. fullhyd, fullhyderabad, Welcome To The Neighbourhood are trademarks of LRR Technologies (Hyderabad) Pvt Ltd. The textual, graphic, audio and audiovisual material in this site is protected by copyright law. You may not copy, distribute, or use this material except as necessary for your personal, non-commercial use. Any trademarks are the properties of their respective owners. More on Hyderabad, India. Jobs in Hyderabad.