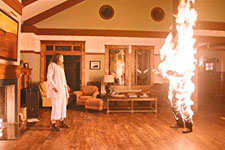 T J Reddy / fullhyd.com
EDITOR RATING
8.0
Performances
Script
Music/Soundtrack
Visuals
8.0
7.0
10.0
8.0
Suggestions
Can watch again
Yes
Good for kids
No
Good for dates
No
Wait to rent it
No
Halfway into director Ari Aster's feature debut Hereditary, an event transpires that shook me to my very core. As a scene, it is something we've watched play out on our screens many a time. But there is something eerily different about how it is presented in this film. For four whole minutes, the movie holds on the reactions people have to the event rather than showing us the graphic details of the event itself. There is stunned silence, quiet contemplation, loud cries that echo through an uncomfortably noiseless cinema hall, and the inevitability of the consequences that follow. The sheer amount of restraint shown in this one sequence makes this movie one of the most assured feature debuts of all time.

While doling out a half-hearted eulogy at her mother's funeral Annie Graham (Toni Collette) talks about how the family's matriarch was a woman filled to the brim with secrets. Do her mother's many secrets have anything to do with her father starving himself to death and her brother's schizophrenia? She isn't sure, and the film never lets its audience draw any conclusions either. Soon after, we observe as Annie and her nuclear family comprising of husband Steve (Gabriel Byrne), son Peter (Alex Wolff) and daughter Charlie (Milly Shapiro) deal with the with the fallout of the matriarch's death in increasingly erratic ways. Revealing more about the plot might be a disservice to anyone looking forward to watching the movie.

Heredity's strengths lie in its unpredictable plotting, its intense portrayal of a dysfunctional family, and its reluctance in sticking to pre-set scary movie norms (for the most part). The first half of the film operates solely by subverting expectations and switching out hackneyed character archetypes with layered dissections of motherhood. One of Annie's miniatures depicts two women attempting to breastfeed the same child. There is a degree of nuance in that one shot that most horror films can't muster in their runtime as a whole. The script meticulously constructs a rich tapestry of interconnected emotional arcs which refuse to sideline any of the four primary characters.

As the second half rolls in and the film's true intentions rise out of its murky set-up, the movie loses one of its primary selling points. The gut-wrenching emotion is ever-present, but the unpredictability that accompanied the narrative dissipates slowly but surely. Deep into the second act, Annie learns that demons possess the weakest member of a family. In a way, the movie's narrative flaws mirror this discovery. As the characters' inner struggles and weaknesses unravel, the film's core is unearthed. Once the audience is made privy to the frailties of the characters, the demon of by-the-numbers storytelling makes its way into the story. Seasoned horror aficionados can see the endgame coming from a mile away, and we'd be lying if we said that that feeling didn't slightly discolour our overall enjoyment of the film.

Even as the narrative falters from time to time, the central performance of Toni Collette stays spellbinding throughout. Her character's inability to express her latent emotions in the first half and the contrast it creates with the second half as she grows increasingly disturbed is a testament to her singular skill as a performer. Collette's mesmeric portrayal makes this film more of a borderline character study than a straight-up horror film. Motherhood and grief have rarely, if ever, been this hypnotically explored.

Gabriel Byrne returns to the screen in a role as meaty as the one he had in The Usual Suspects some two decades ago, and is a welcome presence as the straight man trying to keep his family from splitting apart at the seams. Milly Shapiro too is equal parts endearing and terrifying as her actions and the motivations behind them are near indecipherable. If only Alex Wolff's performance and his unmissably fake crying noises matched what his co-stars were bringing to the table. He isn't bad but doesn't put out a performance that matches Collette's nomination-worthy portrayal of Annie.

And therein lies the caveat. This is not pop-horror in the vein of Insidious or The Conjuring nor is it shock horror a la the Saw franchise - it is art-house horror cinema. It is reminiscent of Roman Polanski's early work. A hybrid of the psychological dread of Rosemary's Baby and the claustrophobia of mental deterioration as depicted in Repulsion.

The film's masterfully subdued score composed by Andrew Stetson and exceptionally designed sets were not meant to jump scare but were instead engineered to build a sense of dread that ensnares a viewer and never lets go. This is a work of art crafted with love but intended on leave an impact that is unmistakably sinister. Even though the movie possesses only a half-dozen scary moments, the build-ups to those moments are as ominous as the influence the dearly departed grandmother has over the family she left behind, and that is solely down to the craftmanship on display from every department.

Hereditary is a slow-burn exploration of the human psyche, and is greatly rewarding for those who want to take a walk on the road less trodden.
Share. Save. Connect.
Tweet
HEREDITARY SNAPSHOT 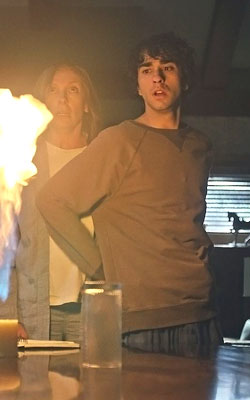 ADVERTISEMENT
This page was tagged for
Hereditary english movie
Hereditary reviews
release date
Toni Collette, Alex Wolff
theatres list
Follow @fullhyderabad
Follow fullhyd.com on
About Hyderabad
The Hyderabad Community
Improve fullhyd.com
More
Our Other Local Guides
Our other sites
© Copyright 1999-2009 LRR Technologies (Hyderabad), Pvt Ltd. All rights reserved. fullhyd, fullhyderabad, Welcome To The Neighbourhood are trademarks of LRR Technologies (Hyderabad) Pvt Ltd. The textual, graphic, audio and audiovisual material in this site is protected by copyright law. You may not copy, distribute, or use this material except as necessary for your personal, non-commercial use. Any trademarks are the properties of their respective owners. More on Hyderabad, India. Jobs in Hyderabad.