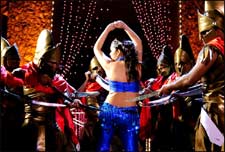 Deepa Garimella / fullhyd.com
EDITOR RATING
2.0
Performances
Script
Music/Soundtrack
Visuals
5.0
1.0
2.0
2.0
Suggestions
Can watch again
No
Good for kids
No
Good for dates
No
Wait to rent it
No
Sye Aata is one of those stupid, unimaginative, deadpan movies that can't decide what they're good at exactly - the stupidity, or the slowness. The film tries to handle what it evidently thinks is an "author-backed" and "heroine-centric" role, with depressing thick-headedness, and lands with egg on its face.

And with the flick containing not a single moment that rises above all the bunk, it's downhill all the way - right from the beginning. Malliswari (Charmme) is a choreographer from Vizag, who's training this bunch of kids for a dance reality show. The troupe comes to Hyderabad, where Malliswari, ends up in the neighbourhood of the local don's (Kota Srinivasa Rao) henchmen.

Shankar, after tricking her into trusting him, forces her to finish off his rival's son Panda (Ajay). To make sure she does the job, he holds the gaggle of kids she's come with, in his custody.

Basically, he wants Malliswari to first charm Panda into falling in love with her, and then shoot him. But her job is already half done, since Panda has long since been in love with Malliswari.

Anyway, shoot him she does, but not before the film divulges a flashback involving Malliswari, her benefactor (Nasseer) and the goons Shankar and Pandit. Apparently, the series of "mysterious" murders that take place in the beginning of the movie were carried out by Malliswari herself, to avenge for a gory past.

Sye Aata is a yawner all through, and as stubbornly moronic as they get. Possibly, the most interesting parts of the flick are those that involve proceedings of the dance show; and the ever-so-slightly-funny comic track that Ali tries very hard to pull off but simply cannot, thanks to the utter blankness that is the film's writing.

Charmme and her trademark (and slightly affected) high-spiritedness are a huge misfit - her role is an example of how badly-crafted this whole flick is. She was obviously pulled in to lend this film some meat, but it's not a film that anyone in her right mind would want in staring at them from their CV.

Besides Charmme, who seemingly tries to be as alive as is possible, Kota is the only actor who can't help being good. Everyone else is low on energy and substance. The kids try, too, but aren't entertaining.

The phrase "low budget" is written all over the film. The visuals are junky, with zero thought given to them. Graphics have been used recklessly, and they aren't even worthy of being called a rough draft. For example, there's a scene set on the Tank Bund, where, instead of the real deal, the background has a photograph of the Buddha statue on perfectly still waters.

Devi Sri Prasad seems to have outsourced his work, with not a single number qualifying as a tune.

There seems to be no justification for you to venture out to Sye Aata. Skip it with a clear conscience.
Share. Save. Connect.
Tweet
SYE AATA SNAPSHOT

See Sye Aata full details
SYE AATA USER REVIEWS
1 - 1 OF 1 COMMENTS
POSITIVE  |  NEGATIVE |  NEWEST  |  OLDEST  |  MOST HELPFUL  |  LEAST HELPFUL
madhuri on 16th Aug 2010, 11:13am | Permalink
Sye Aata is a full lenght entertainer with all the elements added in equal quantity leaving the audience with a simple message to think of after the movie.

It is one of the best piece leaving the audience with a good feel & message .

i wish that every one watches the movie & will definetly feel worth watching film.

ADVERTISEMENT
This page was tagged for
Sye Aata telugu movie
Sye Aata reviews
release date
Charmme, Kota Srinivasa Rao
theatres list
Follow @fullhyderabad
Follow fullhyd.com on
About Hyderabad
The Hyderabad Community
Improve fullhyd.com
More
Our Other Local Guides
Our other sites
© Copyright 1999-2009 LRR Technologies (Hyderabad), Pvt Ltd. All rights reserved. fullhyd, fullhyderabad, Welcome To The Neighbourhood are trademarks of LRR Technologies (Hyderabad) Pvt Ltd. The textual, graphic, audio and audiovisual material in this site is protected by copyright law. You may not copy, distribute, or use this material except as necessary for your personal, non-commercial use. Any trademarks are the properties of their respective owners. More on Hyderabad, India. Jobs in Hyderabad.