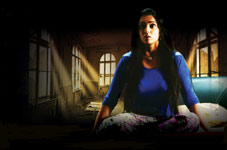 Josh / fullhyd.com
EDITOR RATING
3.5
Performances
Script
Music/Soundtrack
Visuals
5.0
2.0
4.0
6.0
Suggestions
Can watch again
No
Good for kids
No
Good for dates
No
Wait to rent it
No
Mantra 2 starts with showing Mantra (Charmme) in her bedroom sleeping in tight-fitting jeans, and with lipstick on and hair plaited neatly. Come on now, who doesn't dress up when they go to sleep? Anyway, someone knocks on the door in the middle of the night waking her up. Turns out her friend Sandhya's come to visit her, and landed late because her bus broke down on the way.

As the friend goes to the restroom, Mantra gets a call from Sandhya's mother who wails and tells her that her daughter just died in a bus accident while on her way to Mantra's. Yes, the same one who just went into the restroom. Mantra dashes out in panic and drives away in heavy rain, and encounters a couple of ghosts on the way. That is the most exciting part of Mantra 2, and lasts a little over five minutes.

There's really nothing else in the whole film which might interest you. Okay, scratch that. There's a song which is a bit like that one in Mantra (the first movie which has nothing to do with this one), which is a rip-off of 'My Humps' by Black Eyed Peas (who may themselves have ripped it off from somewhere else). You know, that song where Charmme appears to have a compulsive obsession for spanking herself. The video here isn't as salacious as the one in Mantra, but it is still capable of retaining your interest for the couple of minutes it lasts.

There you go - that's about eight minutes which may warrant some attention. Eight minutes in the whole movie of about a hundred and twelve minutes. (Or at least that's what the clock says, though it's possible to disbelieve that. The movie may have been going on for three whole days. Ask Einstein.)

We'd tell you more about the plot if we weren't too confused about it ourselves. And confusion isn't the only problem with the film, either. There are superfluous murder attempts which happen in public, as if nobody was going to notice a guy stabbing a girl. There are some "comedy" scenes involving a gay, which are concluded as meaninglessly as they are begun. Gays, just as with anybody else, can be made fun of, but there's a problem when the joke is that the guy is gay. Nothing funny there, sorry.

Then, there is a hero sort of a guy (Chetan) who is a policeman, and his idea of a joke on his friend is to have her surrounded by gun-toting strangers. And his parents and sister overact as if they'd swell up if they didn't make us cringe at the inanity of it all. It's like someone's handing out medals for the most hammy performance, and no one's really worried about how good or bad the performance is.

Then, most sequences are plain unnecessary - it's like writing a 3,000-word essay when you have barely enough material for 300 words.

The one good thing about Mantra 2 is the leading lady. Charmme turns in an earnest performance and works hard to make it all look worth it. But while you may feel sympathetic towards her for all that earnestness, it isn't worth it. The script and direction let her down. Tanikella Bharani and Delhi Rajeswari who play an elderly couple try and try to put some life into the film, but there's nothing they can do to a script that appears to have been generated by the same computer which generated the CGI. All the other actors look like they're desperately auditioning for a TV serial. The music doesn't register at all. The visuals are decent, however, and Charmme looks pretty as a peach.

As the movie trudged and meandered and went in circles, we had an environmentally conscious thought. There's one animal that'll never go extinct. The Red Herring. The way red herrings turn up in our movies, we should never really worry about their numbers. Mantra 2, in particular, has enough of them - dumb, pointless, and numerous, and all treated with disturbing carelessness. Forget species extinction, we're now worried about animal rights.
Share. Save. Connect.
Tweet
MANTRA 2 SNAPSHOT 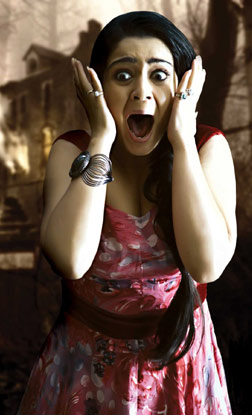 ADVERTISEMENT
This page was tagged for
Mantra 2 telugu movie
Mantra 2 reviews
release date
Charmme Kaur, Chetan
theatres list
Follow @fullhyderabad
Follow fullhyd.com on
About Hyderabad
The Hyderabad Community
Improve fullhyd.com
More
Our Other Local Guides
Our other sites
© Copyright 1999-2009 LRR Technologies (Hyderabad), Pvt Ltd. All rights reserved. fullhyd, fullhyderabad, Welcome To The Neighbourhood are trademarks of LRR Technologies (Hyderabad) Pvt Ltd. The textual, graphic, audio and audiovisual material in this site is protected by copyright law. You may not copy, distribute, or use this material except as necessary for your personal, non-commercial use. Any trademarks are the properties of their respective owners. More on Hyderabad, India. Jobs in Hyderabad.