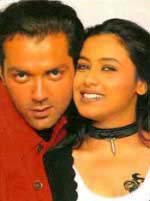 Pratima Agnihotri / fullhyd.com
EDITOR RATING
5.0
Performances
Script
Music/Soundtrack
Visuals
NA
NA
NA
NA
Suggestions
Can watch again
NA
Good for kids
NA
Good for dates
NA
Wait to rent it
NA
Jiva (Bobby Deol) has been scalded by life. Chased by a rich girl, whose villainous father?s vendetta consists of spreading vicious rumors that consume his family, Jiva is now a contract killer, one of the hired assassins Bombay is infested with. His efficient handling of his current profession is wrecking havoc in the city.

Into this loner?s life, a scorpion is whose sole companion, enters Kiran (Rani Mukherjee). Forever fighting with her father?s spendthrift mistress, Kiran has none but her loving brother whom she sees murdered. The mastermind behind these gruesome killings is Devraj Khatri (Ashish Vidyarthi), ACP, Narcotics Dept. Kiran, the only witness, can expose this lionized officer who is actually a corrupt junkie. Kiran and her companion Jiva are now on the hottest hit list of the baddie and his battalion.

In this impossible situation, love, as is its wont, blossoms. What happens next? Do the good win over the bad? At what cost? If you can spare the time, watch Guddu Dhanoa?s Bichhoo to get the eminently typical answers.

A predictable story line with a twist in the tail, the film appears interesting, if at all, due to the performances of Aashish Vidyarthi and Rani Mukherjee. Aashish resurrects Amjad Khan?s Gabbar. He consciously overdoes the evil to make it appear ridiculous, which makes it both fascinating and further frightening.

If the villain is this interesting, can the heroine be far behind? Rani Mukherjee puts in a spirited performance as the nervy yet naive Kiran. With shades of Ghulam, her character is complex and ably portrayed. Bobby Deol tries aping Sunny Deol. Unfortunately, his constant companion, the scorpion, with its dead pan expression, emotes better.

An allright movie that could have been better paced, Bichhoo boasts of songs that are picturized exotically, but are utterly superfluous. The Shetty number, "Tote, Tote", for example, is an inexplicable addition. It provides the public a phookat ka dekko at a funky rock show, though. The background music uses echoes of blues/jazz effectively.

In brief, a paisa-vasool film, which shows the unbelievably armed police force using exotic weapons like Diwali crackers. Wish our jawans, shivering out there in Kargil, were thus armed. The terrorist problem could have been speedily resolved! In brief, a typical masala-mix, which might satisfy the typical phillum audience.
Share. Save. Connect.
Tweet
BICHHOO SNAPSHOT

ADVERTISEMENT
This page was tagged for
bichoo hindi full movie
bichhoo
Bichhoo hindi movie
Bichhoo reviews
release date
Follow @fullhyderabad
Follow fullhyd.com on
About Hyderabad
The Hyderabad Community
Improve fullhyd.com
More
Our Other Local Guides
Our other sites
© Copyright 1999-2009 LRR Technologies (Hyderabad), Pvt Ltd. All rights reserved. fullhyd, fullhyderabad, Welcome To The Neighbourhood are trademarks of LRR Technologies (Hyderabad) Pvt Ltd. The textual, graphic, audio and audiovisual material in this site is protected by copyright law. You may not copy, distribute, or use this material except as necessary for your personal, non-commercial use. Any trademarks are the properties of their respective owners. More on Hyderabad, India. Jobs in Hyderabad.