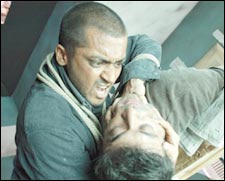 Priyanka Pulla / fullhyd.com
EDITOR RATING
7.0
Performances
Script
Music/Soundtrack
Visuals
NA
NA
NA
NA
Suggestions
Can watch again
NA
Good for kids
NA
Good for dates
NA
Wait for OTT
NA
The antithesis is that what the director intended as the primary plot of Ghajini becomes incidental, and what is a flashback, a subplot, becomes its prize-winning sequence. The sprightly love affair between Sanjay Ramaswamy (Surya) and Kalpana (Asin) is the show-stealer, and its tragic end, the movie's whyfor.

Those who love how tightly Memento and The Bourne Identity were scripted, or how well 50 First Dates explores the ramifications of The Goldfish Syndrome, should strictly stay away from this "inspiration". For anyone inclined to use his logical faculties, Ghajini will have nothing left after a barrage of incisive questioning. But if you let little slips pass by benevolently, it's a riotous entertainer. Action, romance and a speck of scientific rationale: it's the winning formula. The science gives you a chance to invent preposterously fanciful situations, and the romance and action let you flesh them out. Burp! It's wholesome fare!

What starts it all off is this: Sanjay Ramaswamy is a cellphone company tycoon. He owns Air-Voice, and acts much like Anil Ambani when he was young. Except, he doesn't have a brother called Mukesh. What he does have is girlfriend Kalpana, who has a rather magnanimous heart. That is what wins him over, and the love affair, like we mentioned, is just plain sweet as hell!

Kalpana is a struggling, minor actress in ad-films, and when the turn of events lead her colleagues to mistakenly assume that Sanjay, who she has not even met till then, is her boyfriend, she grabs the chance to swipe some of the limelight.

Sanjay chances upon her serendipitously - as he is out to meet her to clear this much propagated and publicized fib - and falls in love with her, without knowing who she is. When he finally finds out, he decides to keep quiet as he is enjoying the game quite a bit.

This entire sequence of shamming and falling in love alongside is full of novel humor. Asin is good in her clowning; her energy in mischief-making moves all the scenes up one level. Surya's quiet and mellow act of cocking his head and breaking into an honest, and rather sensuous smile, as he enjoys her buffoonery, is naturally done.

The tragedy that strikes comes in the form of Lakshman, whose villainous dealings are sabotaged by Kalpana's charitable ways. She rescues a group of girls who are have been kidnapped to be forced into prostitution, and Lakshman, who is behind this, gets on her trail. And it happens. Much to the pressure on the tear-glands of the sentimental members of the audience, she is killed. And Sanjay, who is there to save her, is slammed on the head, leading to short-term memory loss (STML).

Excuse us, but the movie BEGINS with the STML. Sanjay is wandering around with a Polaroid camera, taking pictures of all his friends and scribbling notes on them. He tattoos names and numbers all over his body. That is because he cannot remember anything beyond 15 minutes, and needs to hold on to the thread of the murder so he can get his retribution.

A lot can be said about the handling of this part of the movie, but let's just stop at "Michael Crichton would have done it very differently". You have questions, questions, questions, if you are the thinking kind. You want to know why he continues running after 15 minutes in a villain-chase sequence if his memory runs out halfway. Is it that his memory of events is gone but the emotion is still pushing him? You want to know how he picks himself up so quickly when he ought to be devastatingly disoriented every time the tape resets. Isn't fifteen minutes too small to rewind and play an entire previous lifetime? So how is he so motivated and convinced in his pursuit of the villain?

But we are picking nits now, carping and cavilling about something that doesn't claim to live up to our finicky standards. So we'll stop. All in all, this is one hell of a racy movie. Towards the end, there are plenty of unnecessary detours that add no entertainment to the story, but the first 3/4ths of the movie is superhit material. As for the music, it rocks, especially with Surya flashing his aforementioned sensuous smile.

Ghajini is definitely a brilliant contender to fulfill this weekend's entertainment needs. It's a rather complete movie, not one of those kinds that has a little plot and follows it with blinkers on. This one hops, skips and jumps into everything, and in the bargain, keeps you riveted. So catch it as fast as you can, and yes, do let us know if you can figure out why it's called what it is.
Share. Save. Connect.
Tweet
GHAJINI SNAPSHOT

See Ghajini full details
GHAJINI USER REVIEWS
1 - 14 OF 14 COMMENTS
POSITIVE  |  NEGATIVE |  NEWEST  |  OLDEST  |  MOST HELPFUL  |  LEAST HELPFUL
USER RATING
8.5
183 USERS
Performances
Script
Music/Soundtrack
Visuals
NA
NA
NA
NA
Can watch again - NA
Good for kids - NA
Good for dates - NA
Wait for OTT - NA
Kish Kumar on 20th Dec 2005, 3:13pm | Permalink
Its called "Ghajini" because he invades everytime and kills the goons.
RATING
10
Worst Climax on 30th Nov 2005, 5:23pm | Permalink
the movie starts great. innovative a bit. but, the real hell can be experienced in the second half of the movie. and the climax is the worst of all the telugu movies i have seen lately.

RATING
4
Noesist on 29th Nov 2005, 11:36pm | Permalink
Well this is different movie. Nice photographic effects,nice colors used in the movie, great action by asin,surya and...STOP!!!! this is what i was feeling and suddenly in climax all those standard telugu movie fundas like Matrix fights, heroine sentiment etc. started and made it worse. Thus finally ended u p as an average movie.
RATING
6
Arun Parupudi on 22nd Nov 2005, 10:00am | Permalink
asin is too good
RATING
10
Aamchi Hyd on 13th Nov 2005, 12:46pm | Permalink
Its not Mohd. Ghazni as well, its Mahmud (or Mahmood) Ghazni or Mahmud of Ghazni. The movie is named so (I assume) because of a similar tale in Mahmud's life wherein he tracked down the killers of one of his wives and killed (most of) them horribly. The tamil pronounciation of many english/other words is known to be rather twisted and evoking smirks all round (refer Mahesh being pronounced Magesh, air being pronounced as yaar, Santosh being pronounced Sundosh etc.); therefore, Ghazni became Ghajini.
RATING
4
Move Nfnf on 12th Nov 2005, 2:22pm | Permalink
Movie Fan,

it's not Mohd Ghajini, it's Mohd Ghazni.


RATING
8
Syam Krishna on 8th Nov 2005, 6:36pm | Permalink
A 3 Star Rating is fine, but you feel bored towards the end of the movie. If Priyanka says the Music Rocks, I definitely would like to contradict the statement. The background score is not at all near to high standard especially during chases and fighting sequences. Harris Jayraj fails to impress with the background score.
RATING
6
Priyanka Pulla on 7th Nov 2005, 11:41pm | Permalink
Howdy!

Sorry if my review doesn't make it too clear-but the 'tragedy' isn't the ending. It's the ending of the flashback. Don't worry-i didnt spoil it for you. As for Kyon Ki, the other movie you are probably referring too-the whole of the movie is a tragedy. so i guess i am not spoiling it for you by saying the ending is one, eh? hope that satisfies you mr.curious name.

datti suresh-please post a detailed list of everywhere i use the work serendipitous. i personally don't like that word too much - if u say i use it that often - i would like to remedy that. nice to know u read my reviews so microscopically:-)

have u seen the movie?

RATING
6
Big Pimpin on 7th Nov 2005, 10:59pm | Permalink
i haven't seen the movie yet, but honestly Priyanka did u have to reveal the movie has a tragic ending? This is not the first time u r doing this.
RATING
2
Datti Suresh on 7th Nov 2005, 10:14pm | Permalink
I am reviewing the reviewer!!! Is it just 'serendipitous' that you tend to use the word 'serendipitously ' once too often?

Nevertheless I enjoy reading your ( & all fullhyd.com) reviews..

ADVERTISEMENT
This page was tagged for
Telugu gajini movie
Ghajini telugu movie
Ghajini reviews
release date
Surya, Asin
Follow @fullhyderabad
Follow fullhyd.com on
About Hyderabad
The Hyderabad Community
Improve fullhyd.com
More
Our Other Local Guides
Our other sites
© Copyright 1999-2009 LRR Technologies (Hyderabad), Pvt Ltd. All rights reserved. fullhyd, fullhyderabad, Welcome To The Neighbourhood are trademarks of LRR Technologies (Hyderabad) Pvt Ltd. The textual, graphic, audio and audiovisual material in this site is protected by copyright law. You may not copy, distribute, or use this material except as necessary for your personal, non-commercial use. Any trademarks are the properties of their respective owners. More on Hyderabad, India. Jobs in Hyderabad.