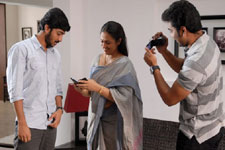 Spandana P / fullhyd.com
EDITOR RATING
5.0
Performances
Script
Music/Soundtrack
Visuals
5.0
7.0
8.0
6.0
Suggestions
Can watch again
No
Good for kids
Yes
Good for dates
Yes
Wait to rent it
Yes
Traffic is not a regular, run-of-the mill film. But what could have been a brilliant racy thriller, is left insipid due to its failure in matching the pace demanded of a movie set primarily on the roads.

Based on a real life incident that took place in Chennai, Traffic revolves around four people, whose lives get entwined due to the events they face on a single day.

Gautham Krishna (Prakash Raj) is a popular movie actor, known popularly as "Shining Star". His much anticipated movie is all set for release on this day. On the same day, however, his daughter who is beleaguered by constant health complications is taken to hospital for an emergency heart transplant.

Satyamoorthy (Cheran), a traffic constable, resumes duty on this day, after being suspended for a while on charges of bribery. By nature a Good Samaritan, he gives in to financial troubles and is caught red-handed while indulging in under-the-table deals.

Robin (Prasanna) is a medical surgeon, and is in a joyful mood as this day happens to be his first wedding anniversary.

Karthik (Sachin), a socially responsible youngster and an aspiring journalist, is excited about his first interview with superstar Gautham Krishna.

Tragedy strikes as Karthik, who is traveling with his friend on a bike, is hit by a speeding car at a traffic signal. He is critically injured and is rushed to hospital.

Karthik's grief-stricken parents are contacted by sources close to Gautham Krishna, requesting them to agree to donate Karthik's heart to help Gautham's daughter survive, as Karthik's chances for survival are anyway quite slim. Though they completely oppose the idea at first, they eventually agree.

Now the glitch is in transporting the heart from Hyderabad to Kodada within a span of 90 minutes, as the girl's life is hanging by a thread. This is where the doctors need to rely on City Police Commissioner Sundara Pandian (Sarath Kumar) to make this seemingly impossible mission a success.

Satyamoorthy, in an attempt to redeem his tarnished image, volunteers to take up the challenge. How he accomplishes this task, with his heroic deeds, is what the rest of the movie is about.

The movie would have had the audiences on the edges of their seats had the director discarded some unnecessary characters in the film. Also, the conversations during the mission between Satyamoorthy, Sundara Pandian, Gautham Krishna and most of the rest of the cast, could have been cut short.

The drama preceding the intermission is bang on, setting up the suspense for the second half. The underlying theme about the importance of donating organs to save lives creates an impact.

Sarath Kumar's performance is stellar, as he effortlessly slips into the character of a tough cop. A stalwart like Prakash Raj however needs to essay a role which does not offer him scope for bringing out the gamut of emotions that he is capable of.

Radhika gives a natural performance as the troubled wife of a superstar. Cheran, Prasanna and the rest of the cast enact their characters well, too.

The background music is noteworthy, complementing the suspense of the plot. The cinematography is pretty good, too.

Though Traffic takes a decent shot at redefining South-Indian cinema, it may not appeal to Telugu audiences due to the strong Tamil imprint (this is a movie dubbed from Tamil). You can watch it if you belong to the avant-garde club of cinegoers who can appreciate an attempt to make different cinema, ignoring the shortcomings.
Share. Save. Connect.
Tweet
TRAFFIC (TELUGU) SNAPSHOT 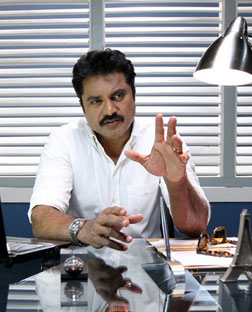 ADVERTISEMENT
This page was tagged for
trAfic movie review in telugu
traffic movie in telugu download
Tarffic movie in telugu
traffic telugu movie
Traffic telugu movie
Follow @fullhyderabad
Follow fullhyd.com on
About Hyderabad
The Hyderabad Community
Improve fullhyd.com
More
Our Other Local Guides
Our other sites
© Copyright 1999-2009 LRR Technologies (Hyderabad), Pvt Ltd. All rights reserved. fullhyd, fullhyderabad, Welcome To The Neighbourhood are trademarks of LRR Technologies (Hyderabad) Pvt Ltd. The textual, graphic, audio and audiovisual material in this site is protected by copyright law. You may not copy, distribute, or use this material except as necessary for your personal, non-commercial use. Any trademarks are the properties of their respective owners. More on Hyderabad, India. Jobs in Hyderabad.