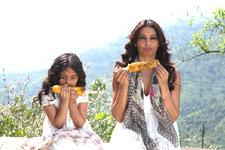 Kritika Deval / fullhyd.com
EDITOR RATING
5.0
Performances
Script
Music/Soundtrack
Visuals
7.0
4.0
7.0
7.5
Suggestions
Can watch again
No
Good for kids
No
Good for dates
Yes
Wait to rent it
Yes
They say that a woman in an abusive relationship never really gets out of it, as lovely, successful Maya (Bipasha Basu) discovers after heaving a sigh of relief too soon.

What they don't say, but should, is that Bollywood concentrates way too much on the "story" part of "horror story". In the case of Aatma, the establishment of a story is what turns it into a could-have-been.

It starts off swell. The scares don't play peek-a-boo. People die in violent and mysterious ways. Mirrors are established as the scene of action.

And, at the epicentre of all this is Nia (Doyel Dhawan), Maya's adorable little daughter, who keeps talking to her father Abhay (Nawazuddin Siddiqui) on the phone - a father who died a while back.

This tendency of Nia troubles Maya (who is of the bent of mind that bygones are better left bygones, especially the abusive kind) so much that she takes the girl to a shrink.

And, wham! Within a span of around 10 minutes, suspense built over the first half hour comes crashing, as you figure out that the sole purpose of the shrink is to aid the makers tell you the aatma's back story.

Basically, Abhay was an abusive husband who treated his daughter like she was the sun and the moon rolled into one. So, when Maya files for divorce and gets the custody of Nia, he is one pissed-off father. And then, when he dies in a ridiculously contrived car crash, the result is one pissed-off ghost.

Also, Abhay might have mentioned to Maya, in a strident and slightly-crazed tone of voice, that he will come back for their daughter. They should probably have thought of flashing "Spoiler Alert" on the screen before this flashback.

So, there you have it. The beginning, the middle, and the ending, even before the latter two parts occur. All that is left is the scary bits - which are unevenly effective. If you are the susceptible sort, you might not go near a mirror when alone for a while after watching this film.

While the storyline lacks punch, originality, and even content; the technicals and the performances carry the movie on their meaty shoulders. After all, what tale can be woven around a child with an invisible friend that hasn't already been told before?

Even those two excellently handled elements can't do much about a screenplay that insists on showing every hand, dissolving the mostly well-executed spooks into a vicious cycle of predictability, much like the one of abuse the beauteous Maya is stuck in.

Despite stellar work by Siddiqui, Bipasha, and the adorable, if slightly annoying, Doyel, the camera wielded by Sophie Winqvist is perhaps the only thing that keeps Aatma from sliding into the meaningless mass of mediocrity that is the genre of horror in general, and in Bollywood in particular. 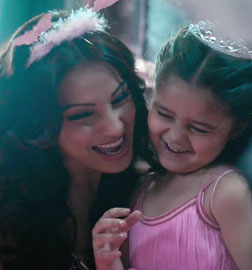 ADVERTISEMENT
This page was tagged for
Aatma hindi movie
Aatma reviews
release date
Bipasha Basu, Nawazuddin Siddiqui
theatres list
Follow @fullhyderabad
Follow fullhyd.com on
About Hyderabad
The Hyderabad Community
Improve fullhyd.com
More
Our Other Local Guides
Our other sites
© Copyright 1999-2009 LRR Technologies (Hyderabad), Pvt Ltd. All rights reserved. fullhyd, fullhyderabad, Welcome To The Neighbourhood are trademarks of LRR Technologies (Hyderabad) Pvt Ltd. The textual, graphic, audio and audiovisual material in this site is protected by copyright law. You may not copy, distribute, or use this material except as necessary for your personal, non-commercial use. Any trademarks are the properties of their respective owners. More on Hyderabad, India. Jobs in Hyderabad.