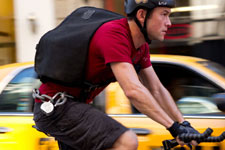 Samrat Sharma / fullhyd.com
EDITOR RATING
7.0
Performances
Script
Music/Soundtrack
Visuals
7.0
6.0
8.0
8.0
Suggestions
Can watch again
Yes
Good for kids
No
Good for dates
Yes
Wait for OTT
No
The first few frames of Premium Rush tell us that Joseph Gordon-Levitt's character is named "Wilee", nicknamed "Coyote". This is the immediacy with which David Koepp unfolds his cards - this is going to be a cartoon violence like film with chases, madcap plans and narrow escapes. You're in with the conceit in the first few moments that kick off in real time, and you get ready for a wild ride.

Only, JGL is the roadrunner.

A bike messenger on a fixie, Wilee is given an envelope by a student who asks him to get it to a destination as fast as possible. All in a day's work for Wilee, except that a bent cop Bobby (Michael Shannon) wants the envelope. As Wilee deftly evades him and heads through dense Manhattan traffic, he sets in motion many such encounters to come.

As Bobby hatches one plan after the next, Wilee's posse of friends and co-workers kick in, and the chase begins. This is a madly-paced cartoon film, but with a palpable sense of danger at every corner. The result is a wildly entertaining movie that is tense and thrilling at the same time.

The plot is actually wafer-thin. Why Bobby wants the envelope is made clear soon enough, but really, all it is is an excuse for Shannon to act like a deranged lunatic in exceedingly hilarious ways and for JGL to give him the slip again and again.

Koepp is great at the breakneck action - although Premium Rush does feel more light on the danger than he intends it to feel. The actors (except for Shannon) are very serious about this situation, which is hardly warranted in the way the film is shot. It never is a problem, but the slight nature of the tone and the danger Koepp wants to show are a tad incongruent.

The best embodiment of the movie's entertaining mantra is Shannon - his inept cop is the source of many a chuckle, and he plays his character less as a menacing madman and more as a schmuck who is caught in some wrong stuff. JGL and his cohort play it straight, though he is fast becoming the man with a very good sense of the tone. His everyday bike messenger is naive and yet completely confident in his ability to ride a bike.

For an action film like this, a lot of stuntmen and CGI are employed to bring everything to the screen. The actor's job is to sell the immediacy, the danger, all the while, keeping the tone of the movie intact - making the same danger in a film like this thrilling, while in another very real and threatening. I don't know how, but JGL instinctively gets is. He expresses his way out of some tight scrapes, and never belies the ultimate diktat: fun.

There may be better films running at the cinemas right now, but in pure entertainment, Premium Rush will give all of them a run for their money.
Share. Save. Connect.
Tweet
PREMIUM RUSH SNAPSHOT 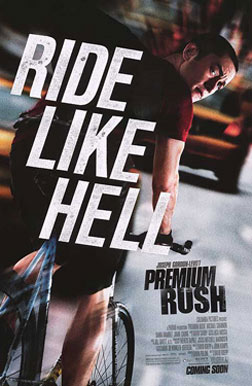 ADVERTISEMENT
This page was tagged for
Premium Rush english movie
Premium Rush reviews
release date
Joseph Gordon-Levitt, Dania Ramirez
theatres list
Follow @fullhyderabad
Follow fullhyd.com on
About Hyderabad
The Hyderabad Community
Improve fullhyd.com
More
Our Other Local Guides
Our other sites
© Copyright 1999-2009 LRR Technologies (Hyderabad), Pvt Ltd. All rights reserved. fullhyd, fullhyderabad, Welcome To The Neighbourhood are trademarks of LRR Technologies (Hyderabad) Pvt Ltd. The textual, graphic, audio and audiovisual material in this site is protected by copyright law. You may not copy, distribute, or use this material except as necessary for your personal, non-commercial use. Any trademarks are the properties of their respective owners. More on Hyderabad, India. Jobs in Hyderabad.