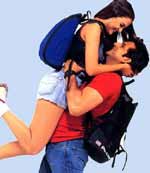 Smriti Kashyap / fullhyd.com
EDITOR RATING
3.0
Performances
Script
Music/Soundtrack
Visuals
NA
NA
NA
NA
Suggestions
Can watch again
NA
Good for kids
NA
Good for dates
NA
Wait for OTT
NA
Fardeen Khan makes a comeback with KDKP. Only, I really don't think anybody noticed - not even Fardeen himself! Cast ceremoniously in Ben Affleck's role from Forces Of Nature, KDKP will need a major hurricane to blow it through the first week. And speaking of blow, Fardeen looks like he's just about returned from a safari through the poppy fields of Afghanistan.

Malaika "pout pout bare bare" Arora's li'l sis too makes her debut, and manages to bravely go where Diya Mirza has not dared to go before. This chick can act and also wear the same set of clothes throughout the flick without raising a stink. Being a celeb really pays!

To skip the pourparlers and get down to the point, KDKP is as dumb as a pocket full of hair. Or even more. Jatin (Fardeen) bumps into Karishma (Amrita) at a mall in the US, and their cells get exchanged (unfortunately not their brain cells, which would've been quite welcome given that Fardeen needs plenty more - it's just their dumb mobiles). This results in un peu de confusion, with Fardeen getting calls from Amrita's tailor asking whether the ghagra choli she ordered needs to have 'naada' or elastic. This puts all sorts of ideas in our head - but we skip those, too.

Anyway, Jatin is on his way to India to get married, and so's Karishma. They catch up, swap phones, fall prey to every disaster conceivable to the scriptwriter, and engage in the most contrived hackneyed dialogues ever written on the face of the earth. These guys soon manage to find their way back home after their flight gets cancelled, taxi-driver gets arrested, and other forms of transportation elude them.

They pose as a married couple, get quasi-married in a mandir after an old couple bullies them, and then return home to get married to their respective would-be spouses like nothing ever happened.

As luck would have it, their respective sets of parents soon find out, and like nothing we've ever seen before, tell the kids to go right ahead and get married. But the kids, thanks to their extra enthu penchant for Indian culture and heritage, decide to do things their own way and shed a couple of buckets of tears.

After a couple of such scenes, the movie begins to resemble a bulldog which had overestimated the proportions of a bone, and then decides to give in and wrap itself up with a scene of a burning mandap and Fardeen rescuing the arson-o-fied Amrita on a white steed. Oh Jesus, Mary and flagellating mosquitoes! That's just what we needed! But the divine intervention in the form of the climax still saves us all from an untimely death, and we troop out dazed after our close encounter with the Grim Reaper. I guess that's why the flick is called Kitne Door Kitne Pass.

Fardeen being himself looks like he's been mopping up all sorts of stuff all day long with a vacuum cleaner, while Amrita looks cute. She begins to look like an 80-year-old without the wrinkles after the first half hour, but that's an issue to be debated in the Security Council. A couple of high-energy songs are tolerable, but nothing saves this one from being "Jitna Door Utna Behthar".
Share. Save. Connect.
Tweet
KITNE DOOR KITNE PAAS SNAPSHOT

See Kitne Door Kitne Paas full details
KITNE DOOR KITNE PAAS USER REVIEWS
1 - 6 OF 6 COMMENTS
POSITIVE  |  NEGATIVE |  NEWEST  |  OLDEST  |  MOST HELPFUL  |  LEAST HELPFUL
USER RATING
6.2
25 USERS
Performances
Script
Music/Soundtrack
Visuals
NA
NA
NA
NA
Can watch again - NA
Good for kids - NA
Good for dates - NA
Wait for OTT - NA
Kabuliwala on 14th Apr 2002, 3:06pm | Permalink
does that bitch amrita sexpose in this pic?
RATING
2
Avinash Tadimalla on 9th Apr 2002, 10:44pm | Permalink
I swore that this movie would have atleast a couple of scenes worth watching for the second time. And I got about half of what I said right. The swearing part. That was about all I did for the entire length of the movie. All in all, a lousy flick. And I'm being astonishingly generous already.
RATING
4
Funky Guy on 7th Apr 2002, 4:06pm | Permalink
amrita arora-
probably the ugliest thing on earth is horrid-
c the movie if u want 2 get rid of those nise tablets somehow

RATING
2
Aishwarya Kamath on 7th Apr 2002, 4:04pm | Permalink
the movie is the pukiest one ive seen in along time-
the worst of the lot is amrita arora who is positively ugly-
dumbness personified-
she does not have the talent for acting nor dancing-
she lacks the spirit in her sister-
and is a major let down
one things for sure-
never will i ever see her movies again ...
theres just one word to describe both her and her movie-
YUCK!

ADVERTISEMENT
This page was tagged for
kitnedoorkitnepaasmkv
kitne door kitne paas movie
Kitne Door Kitne Paas hindi movie
Kitne Door Kitne Paas reviews
release date
Follow @fullhyderabad
Follow fullhyd.com on
About Hyderabad
The Hyderabad Community
Improve fullhyd.com
More
Our Other Local Guides
Our other sites
© Copyright 1999-2009 LRR Technologies (Hyderabad), Pvt Ltd. All rights reserved. fullhyd, fullhyderabad, Welcome To The Neighbourhood are trademarks of LRR Technologies (Hyderabad) Pvt Ltd. The textual, graphic, audio and audiovisual material in this site is protected by copyright law. You may not copy, distribute, or use this material except as necessary for your personal, non-commercial use. Any trademarks are the properties of their respective owners. More on Hyderabad, India. Jobs in Hyderabad.