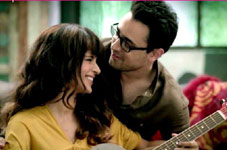 Zehra Abbas / fullhyd.com
EDITOR RATING
4.0
Performances
Script
Music/Soundtrack
Visuals
7.0
3.0
6.0
7.0
Suggestions
Can watch again
No
Good for kids
No
Good for dates
Yes
Wait to rent it
No
Katti Batti opens with Maddy (Imran Khan) being rushed to the hospital after he has mistakenly drunk phenyl. Once the movie ends and the credits begin to roll, you'll wish the phenyl had done its job properly right in the beginning.

Katti Batti tells the convoluted tale of Maddy and Payal (Kangana Ranaut) - college sweethearts, long-term live-in lovers, and finally exes. When Payal suddenly walks out on him, Maddy is unable to let go, and devotes his energies to tracking her down in the hopes of winning her back. The big question through most of the film is - why did she leave?

Maddy and Payal first meet in college in Ahmedabad. He is your textbook square and sentimental nerd, and she's the quintessential wild child who is obviously out of his league. How do we know this? Production put a pair of thick, black spectacles on Khan's nose, and outlandish wigs and clothes on Ranaut's body. The latter's wardrobe can best be described as "Kitsch Kill".

He wants sachcha pyaar, but she's looking for time-pass, and so Maddy sacrifices his noble intentions and promptly indulges in some heavy-duty "lip-to-lip kissiyan" with Payal. Incidentally, the picturisation of that song is a visual treat, and like most of Shankar-Ehsan-Loy's score for the film, it's a catchy number.

Soon enough, noble Maddy wants more than kissiyaan - he wants cuddling (we're not lying, hand to God), and so they move in together. The production team needs to take a bow once again, because Maddy's and Payal's pad looks like Dilli Haat threw up in there. The proverbial icing on the cake? A pet turtle named Milkha (the funniest joke in the entire film), whom Maddy carries around in a glass box after Payal leaves him.

You see, the protagonists of Katti Batti are really cool. The filmmakers seem to have decided that the best way to appeal to young India is to throw in all the elements that exemplify coolth. So, the various characters in the film talk about viral videos, Facebook, MMS, condoms and one-night stands, parents laugh adoringly at their drunken son, crores are spent on a destination wedding, and there's a fusion band that looks like it's just returned from a gig in Soho. Escapism is one thing, but Katti Batti's obsession with its idea of urban cool, most of which has a decidedly big bucks inaccessibility, is exhausting. You'll need a chai at the local dhaaba to cleanse your cinematic palate of all that excess froth.

Also, it doesn't help that it's difficult to connect with the characters. Khan is earnest as "Mad"dy, and this is definitely one of his better performances. However, how can any actor surmount a script that requires him to elicit laughs by peeing on a commode displayed at a designer sanitary fittings outlet? He does his best with all the confused and unbelievable situations that his character dives into, but it's just not enough.

Ranaut, too, is let down by the script which refuses to get out of her way. Case in point, she doesn't need a skimpy wardrobe to portray a liberated, free-spirited woman. The makers seem to have forgotten that she did that very successfully in salwar-kameezes in Queen. More importantly, Payal's motivations are difficult to empathise with - why would any woman in her right mind go to such ridiculous lengths to conceal a secret? Still, despite this obviously being a vehicle for Khan, Ranaut's talent shines through in a number of scenes.

The film is a hodge-podge of past and present, as director Nikhil Advani takes us on Maddy's journey to find Payal, and intersperses it with flashbacks that take us from courtship to breakup. The non-linear narrative technique was a good idea in theory, but Advani should have remembered that the story is king. If the basic storyline is lacklustre, then it doesn't matter how you tell it.

By the time the big reveal happens towards the end of the movie, you're already fidgeting impatiently in your seat. At this point, the change in emotional tone, and the descent into maudlin sentimentality is pretty jarring. Again, Khan and Ranaut salvage the ending somewhat, but the audience is left confused, and also feeling a wee bit manipulated.

The makers have lifted basic ideas from a number of films, thrown them all together, and slapped a fresh coat of paint on that mess. They have then gone to town about how the film is a fresh take on urban romance. Well, it's about as fresh as yesterday's samosa. Still want to take a bite?
Share. Save. Connect.
Tweet
KATTI BATTI SNAPSHOT 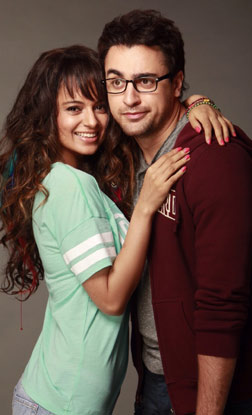 ADVERTISEMENT
This page was tagged for
Katti Batti hindi movie
Katti Batti reviews
release date
Imran Khan, Kangana Ranaut
theatres list
Follow @fullhyderabad
Follow fullhyd.com on
About Hyderabad
The Hyderabad Community
Improve fullhyd.com
More
Our Other Local Guides
Our other sites
© Copyright 1999-2009 LRR Technologies (Hyderabad), Pvt Ltd. All rights reserved. fullhyd, fullhyderabad, Welcome To The Neighbourhood are trademarks of LRR Technologies (Hyderabad) Pvt Ltd. The textual, graphic, audio and audiovisual material in this site is protected by copyright law. You may not copy, distribute, or use this material except as necessary for your personal, non-commercial use. Any trademarks are the properties of their respective owners. More on Hyderabad, India. Jobs in Hyderabad.