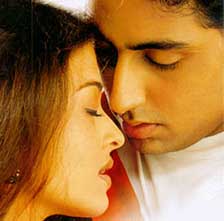 Pratima Agnihotri / fullhyd.com
EDITOR RATING
5.0
Performances
Script
Music/Soundtrack
Visuals
NA
NA
NA
NA
Suggestions
Can watch again
NA
Good for kids
NA
Good for dates
NA
Wait for OTT
NA
This dude's start is pretty promising in that it's more or less like his Dad's was after three movies. Difference is, Dad then got a Prakash Mehra, and an as-yet-unused angry young man theme. And these improved things for him, in a way of speaking. Whether history will repeat will be known only after 2-3 more movies, but, as of now, in evil Bollywood where the boys are swiftly separated from the men, this dude, as Aerosmith would put it, looks like a lady.

The scion of a super-rich family with a business strength of twenty-five factories, Seth Garewal (Amrish Puri) is a proud patrician. Unlike his jolly and affectionate younger brother (Anupam Kher), family honor alone matters to this dictator who assigns everybody in the family roles they must fit in to.

His rebellious daughter, Sahiba (Aishwarya Rai), does not fancy the conventional bliss of an arranged marriage, and would rather pursue her studies. Not that academic arena is less stifling than the familial space. In her hostel, she witnesses a murder. On the run to escape the hoodlums, she realizes that now she has nowhere to go. Thanks to her bua, everybody back home thinks she has married on the sly, while to college she dare not go back. As she is about to commit suicide, Captain Karan (Abhishek Bachchan), who had earlier bashed up the goons chasing her, once again saves her. He takes her home, and back it is to confinement within the family honor, though this time, Karan, who the family assumes to be her husband, is there to share it.

Such stifling of a young woman's urge for freedom from family traditions, which want her to be married off at eighteen, is what the film tantalizingly prises open. In fact, time and again, the story returns to the way that women, loving bahus to the commanding Dadima, are suppressed in the patriarchal fold.

The focus wanders, though. So does the never-ending plot based on mistaken identity. In this bhoolbhulaiyya of a loooong film, turning and twisting like the winding, endless gallis near Charminar, we get to see everything that a typical masala film can offer - patriotism, festivals, murder mystery, business wars, and the inane fantasies of the hero and the heroine who explode into the dance-n-song routine at the drop of anything they happened to lay their hands on.

And lost in this mish-mash of mushy to mucky (and really insufferable is Shakti Kapoor as a comedian) is the stalwart effort of poor Abhishek Bachchan, who tries his level best to prove his mettle across a varying range of emotions. Dude needs more luck.

All this emotional (melo)drama is etched against the lush scenario of the color-rich Punjab and its "diler" traditions. The film is a wonder of cinematography. Every trick in the cameraman's textbook is used to enliven the vitality of the ambience. From the slightly dusky, ethnicised beauty of Aishwarya and the colorful "baraat" to the lyrical presentation of the futility of an intense passion bound by family honor, the film is a riot of colors captured through pretty unusual angles. The melodious songs provide another respite from the story with its very filmy twists. The film shows how important editing is to filmmaking.

As for acting, the gold medal should go to the eye-twirling Amrish Puri, some follower of Karate and Kung-fu who slaps everybody in sight right, left, center despite the victim's age or status. Closely follows the gorgeous Aishwarya who, when not weeping copiously, peeps from behind the all-protective lover boy, giving him the dumbest look possible to convey her embarrassment, shrieking her heart out all along to find out why he is so good that she cannot but love him. The rest of the cast, including Anupam Kher, act out their supporting (character) roles in a mawkish imitation of the wedding videos that the mid-90's superhits, in the wake of Ham Aapke Hain Koun, were.

In brief, this supposedly family-viewing film is a missed and wasted chance to have depicted precisely either a young girl's dilemmas, caught as she is in her family's true love for her that complicates her situation, or a thorough gentleman's search for true love.
Share. Save. Connect.
Tweet
DHAI AKSHAR PREM KE SNAPSHOT

ADVERTISEMENT
This page was tagged for
hindemovesdhaiaksharperm
written 'dhai akshar prem ke' film story in hindi
Dhai Akshar Prem Ke hindi movie
Dhai Akshar Prem Ke reviews
release date
Follow @fullhyderabad
Follow fullhyd.com on
About Hyderabad
The Hyderabad Community
Improve fullhyd.com
More
Our Other Local Guides
Our other sites
© Copyright 1999-2009 LRR Technologies (Hyderabad), Pvt Ltd. All rights reserved. fullhyd, fullhyderabad, Welcome To The Neighbourhood are trademarks of LRR Technologies (Hyderabad) Pvt Ltd. The textual, graphic, audio and audiovisual material in this site is protected by copyright law. You may not copy, distribute, or use this material except as necessary for your personal, non-commercial use. Any trademarks are the properties of their respective owners. More on Hyderabad, India. Jobs in Hyderabad.