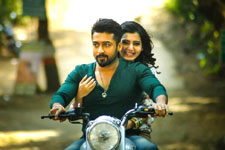 Ravi Kandala / fullhyd.com
EDITOR RATING
3.0
Performances
Script
Music/Soundtrack
Visuals
3.0
2.0
2.0
3.0
Suggestions
Can watch again
No
Good for kids
No
Good for dates
No
Wait to rent it
No
First things first - Samantha is no longer the saree-clad, Chinmayi-voiced girl that we loved in Ye Maaya Chesaave. The Samantha that we see in Sikandar - the title has no relevance to the movie, by the way - is dubbed for by someone with a terribly screechy voice, and is not hesitant to flaunt her physique in a bikini top and sarong for the briefest of moments. While the costumes may be welcome for many, we only hope that the screechy voice is a one-off aberration, and that Chinmayi resumes dubbing for her once she returns from her honeymoon (Chinmayi recently got married to Rahul, one of the leads from Andala Rakshasi).

The other thing that strikes you while watching Sikandar is how most words spoken by the cast and crew of a movie about their film are just that - words. Surya, in the audio release of the movie, spoke about how he needs to keep in mind his fans amongst kids, women, the masses and the classes while making a movie, to ensure that he satisfied all of them. The glorification of violence in the film makes you wonder if his fans amongst kids and women expect these and feel gratified when their expectations are met.

How Raju goes missing, and his love story with the police commissioner's daughter played by Samantha, form a terrible flashback. The story then returns to the present and deals with the return of Raju and some gang rivalries, all of which manage to induce several yawns amongst the audience.

Sikandar's curse is its absolutely banal writing. The film is devoid of any twists that take you by surprise. Whatever twists there are, are so boring that any regular moviegoer can see them coming from a mile. The songs butt in at all the wrong places, the story trundles slower than a snail, and the action is all ho-hum. It is surprising that a director like Lingusamy, who directed screenplay-based movies like Run and Pandem Kodi, would fail at his strengths this spectacularly. All the villains seem supremely dumb as none of them manages to recognize him the moment he shaves his beard off.

Surya is ordinary and goes through the motions. The variation between the two roles he essays is neither significant nor noticeable. Samantha, like we mentioned earlier, is clearly getting into the glamour game, and is upping her quotient movie after movie. There are several others in the film - Vidyut Jamwal, Manoj Bajpayee, Brahmanandam for a brief while, and Murali Sharma - who get to display no acting chops at all.

The music might have sounded good in Tamil, but its appeal is clearly lost in translation for the Telugu crowds. Santosh Sivan returns to masala movies after a while, but none of the finesse is visible. If all you use talent like his for is to shoot a scene of a bird plucking a fish out of water, then you are most likely flush with cash and have little taste.

Sikandar is one of those forgettable dubbing movies that will soon start playing on the local cable network.

P. S.: What was more interesting was the short film I Am The Change, produced by and starring Allu Arjun, and directed by Sukumar. The kind of buzz that the 3-minute feature produced was much more than that the 3-hour movie could manage.
Share. Save. Connect.
Tweet
SIKANDAR (TELUGU) SNAPSHOT

ADVERTISEMENT
This page was tagged for
sikandar telugu full movie
sikandar full movie in telugu
Sikandar (Telugu) telugu movie
Sikandar (Telugu) reviews
release date
Follow @fullhyderabad
Follow fullhyd.com on
About Hyderabad
The Hyderabad Community
Improve fullhyd.com
More
Our Other Local Guides
Our other sites
© Copyright 1999-2009 LRR Technologies (Hyderabad), Pvt Ltd. All rights reserved. fullhyd, fullhyderabad, Welcome To The Neighbourhood are trademarks of LRR Technologies (Hyderabad) Pvt Ltd. The textual, graphic, audio and audiovisual material in this site is protected by copyright law. You may not copy, distribute, or use this material except as necessary for your personal, non-commercial use. Any trademarks are the properties of their respective owners. More on Hyderabad, India. Jobs in Hyderabad.